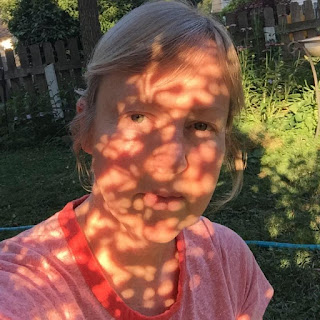 Laura Sanders is a phenomenal realist painter from Columbus, Ohio. She's exhibited throughout the US, and has won several awards, primarily from the Ohio Art's Council. Laura has been featured in American Art Collector, Juxtapoz, New American Paintings, and numerous other periodicals. She's been an artist in residence at the Headlands Center for the Arts in Sausalito CA, the Vermont Studio Center, and the Fine Arts Work Center in Provincetown, MA. Her art is in the Columbus Museum's permanent collection. 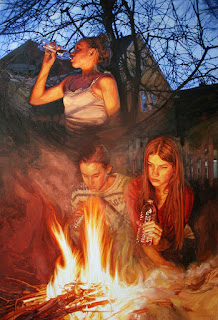 Laura was born in Detroit, Michigan, but when she was seven her family moved to Dayton, Ohio. She always had a strong connection with nature. In this article by Sarah Sole (City Scene Columbus, 2014), Laura talks about how she loved cycling in the woods of Michigan every summer, while visiting her grandparents, "It made a huge impression on me."
Laura decided to pursue fine art as a career in her junior year of high school, thanks to a supportive teacher. She went on to earn her BFA at the Columbus College of Art & Design. She had a dual major in painting and ceramics. 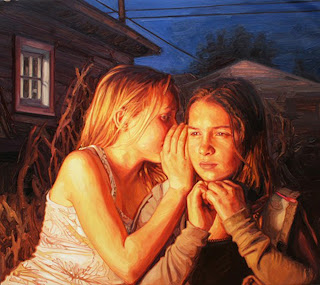 According to the Hidell Brooks Gallery, Laura works from her photos, often putting them in photoshop and collaging pieces together to get the composition she wants. Laura says (Sole, 2014), "When I’m painting, I’m thinking of it almost sculpturally." We also learn that her models are mostly Laura's daughter and her friends. 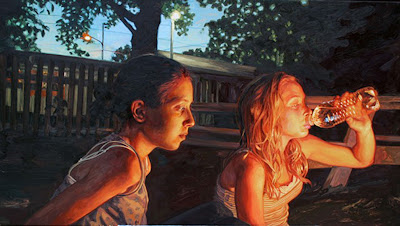 'Fire Watch', 2011
Laura has been so kind as to answer some questions about her life and art, so here is our interview:
1. Could you tell me about your childhood and family? What did your parents do for a living? Did you have any siblings? Were there any artists in your family?
"I grew up the oldest of four in a pretty typical middle class family living in a suburb of Dayton, OH. My Dad was an engineer and worked at Wright Pat air force base. He had an exciting career, working on landing gear for the Apollo mission and other projects for NASA. My mom sacrificed her dream of going to college to first work as a secretary to pay my Dad's college fees and then as a homemaker for our family. There were no artists in the family. I always chalked that up to my being adopted, but years ago after discovering who my birth family were it looked like I was the only one. Only recently have I learned that there are quite a few in my background." 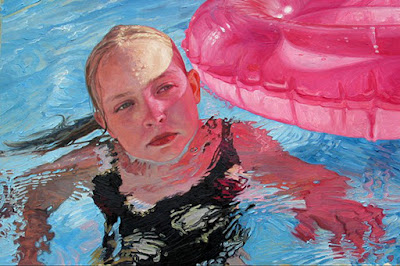 'Sunlight Through Pink Polymer', 2009
2. When did you first start making art, and what did you make?
"As a kid I always liked crafts of any kind. I really didn't think of it as anything other than fun until junior high school. I was getting in some trouble in class, and I remember having been vanquished to the hall when my art teacher came along. He suggested instead of my sitting in the hall why don't I come and be his helper in the classroom. I had been very engrossed in a painting of a circus, of all things, and he encouraged me to come in anytime and work on it. I became hooked and thanks to a very good high school program, I got lots of guidance and exposure to different mediums." 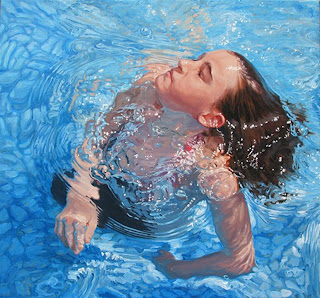 3. What was it like finishing college with an art degree? What was your plan, and how did it go?
"I loved college! And unfortunately I had no plan afterward. I had a vague idea that if I wanted to teach I needed a masters. I wasn't ready to do that right away, so I looked around my area for something related and right away found a job working in a scenic shop for an equity theatre company. It was kind of a diversion to being the artist that I wanted to be but it was a fun 6 years that I spent in that business." 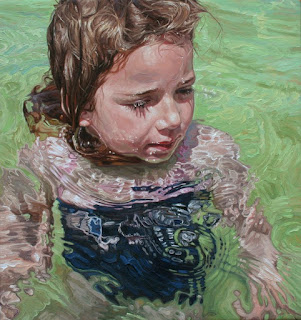 4. What are you working on now?
"I just finished two small paintings with dappled light taken to the extreme. I am trying to find the form in the riot of light." 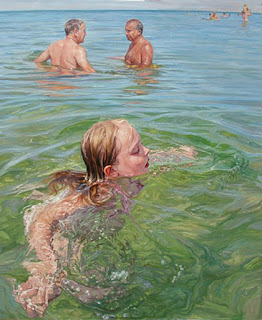 5. Do you still ever make ceramics?
"Sadly no. In a perfect world I would have continued, as I love making things out of clay. After my scenic art days I bought a kiln and a wheel and I tried to make a job out of selling ceramics. I finally felt that I was too divided trying to do both painting and ceramics. Plus I still had a lot of learning to do about glazes and such. So I set my focus on painting, but I would love to be able to throw a pot or two once in a while." 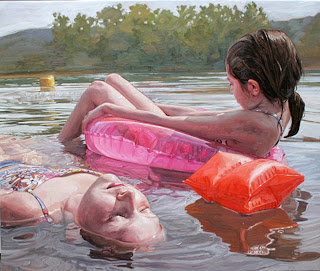 6. Different plastics play a big role in your painting – you find the beauty in them. I’m curious what point you’re making. That people keep producing too much of it, and it’s wasteful? Did part of this come from wanting to raise awareness about recycling?
"I feel that plastic is a tragedy. A couple generations ago the world got along just fine without
them. Even in my own lifetime, even just the last 10 years, there has been an exponential growth of plastic use. It is so commonplace and ubiquitous that it is almost invisible. I think one of the functions of art is to draw attention to something. Not necessarily to dictate what to think about it but to simply consider something and why it is there and what does it mean. The following is something I just wrote about my work that addresses plastic and also how I feel about the women in my paintings:
"Plastic is practically eternal, but its usefulness is short lived. It can beautifully refract, condense and bend light, but is made with environment poisoning chemicals that can be mistaken for food that the web of life cannot digest. I like to incorporate plastic images within the environment of my figurative paintings. Historically women have been used to personify nature; I use plastic to personify humanity. The women in my paintings are daring or dumb, depending on your judgement. They exhibit either vigilance or nonchalance. They are in natural spaces that women are instructed to avoid or told to never go in alone. In my current paintings I have combined my environmental sensibility with a reflection on what it means for a woman to be alone in the natural environment." 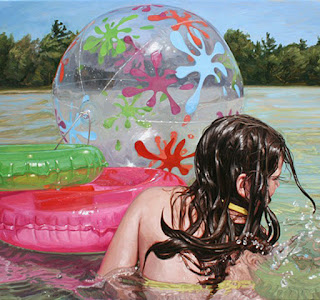 7. If time and money were no object, what would be your dream art project?
"Oh wow. I think it would be so fun to hire a team of experts in sculptural/building materials that could help me execute my sculptural ideas. People with the expertise to make any idea I have, like a Jeff Koons studio. That sounds like playing God a little bit doesn't it? But really I am pretty happy making my paintings. I just wish I was a little faster at it." 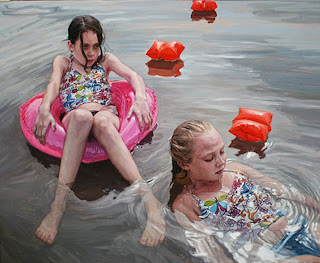 8. Who or what are some of your biggest artistic influences? (Note, some links are inappropriate for younger viewers)
"There are so many! But I would say some of my earlier influences were, Lucian Freud, David
Hockney, Wayne Thiebaud, and Eric Fischl. Today I am looking at artist's like Lois Dodd, Neil
Welliver, Robin F. Williams, Kerry James Marshall and Jenna Gribbon." 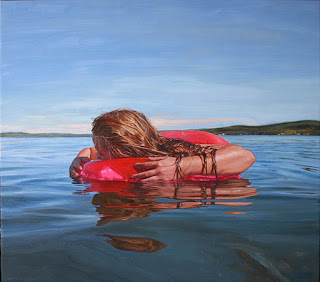 9. If you could own any one artwork, what would it be?
"I recently saw new work (from afar, on Instagram) by Alex Dodge that looks so amazing. If I could pick any one piece today it would be a painting of his titled 'Whisper in my ear and tell me softly.'" 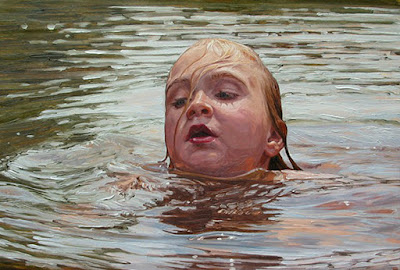 10. What do you think of art education in the US? What would you change or improve if you could?
"I had an amazing middle and high school art education experience. Mostly in that I was offered many different courses, had great teachers and had a lot of material resources. If I could improve anything, it would be that all schools have the resources to offer comprehensive programs. I don't think there is any problem with the curriculum that teachers provide just the financial structure that limits the ability for it to be offered to every child. It is just a tragedy when schools opt to cut vital programs like the arts." 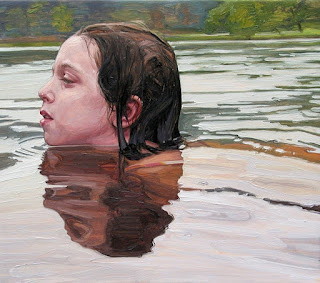 11. What advice do you give to young art students?
"That being an artist is a marathon not a sprint. That art takes practice just like playing a musical instrument and that every piece of work you do is not an end in itself. It is a process of discovering what you will do next." 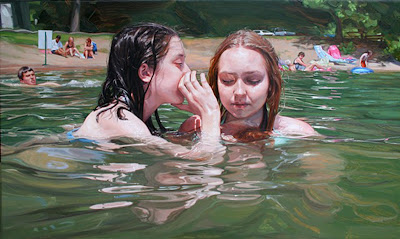 12. What do you tell someone who thinks art doesn’t matter?
"That art is about empathy. You cannot create art without empathy and good art evokes empathy. It brings diverse people together to understand each other and it is the expression of the human spirit." 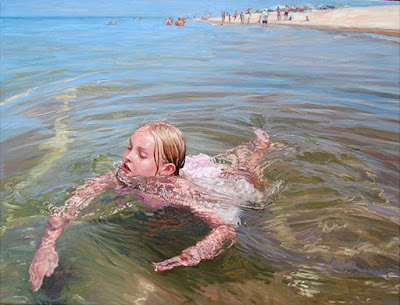 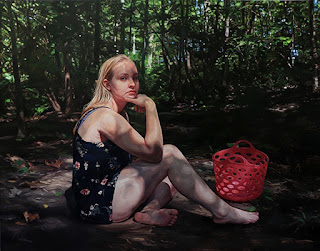 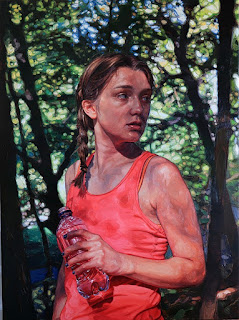 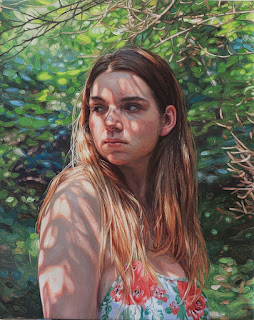 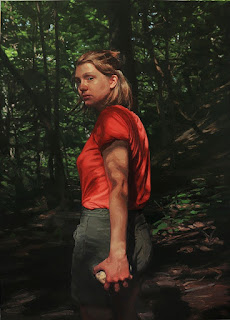 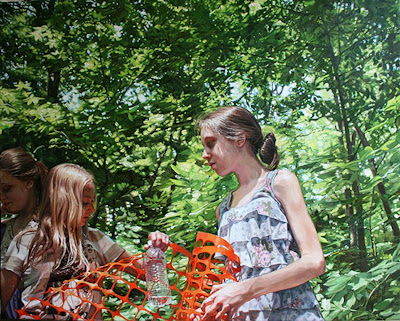 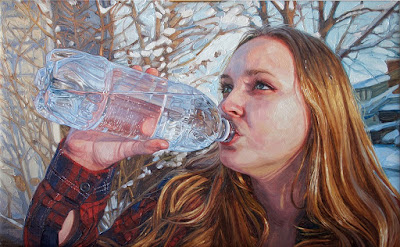 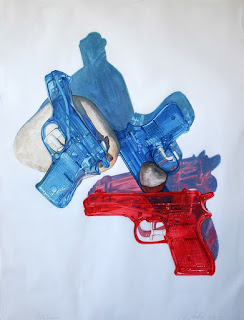 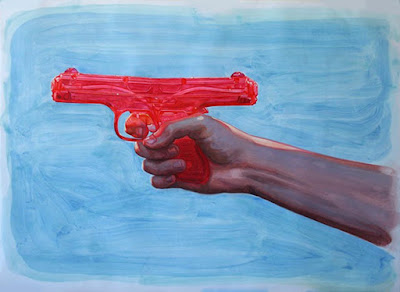