Who Am I to Judge?

Who am I to Put Together Such a List?
I’m just a guy who likes art. I studied it in college, and I’ve spent years pouring through the net to find new artists (I have somewhere around 7,000 on my computer). I’ve been to most of the major art museums in Europe, and I’ve taken this project seriously, spending five years researching over 3,000 women artists in my spare time. I'm also a practicing artist and I've taken courses in painting, photography, printmaking, figure sculpture, digital media, and jewelry making, so I have a rough idea of the amount of skill and difficulty involved in art making. But, I’m still just one, limited, biased opinion, and I know it. I’m also the only person I know to have done this (apart from Phaidon), to have looked so extensively at so many artists with this question in mind.

How Are You Biased?
I tend to prefer figurative, narrative art and illustration. While I appreciate both realism and abstraction, I find realism more impressive, generally, although I can’t stand clichés like flower baskets and kittens, or Baroque grapes and apricots in a silver bowl on a marble counter top. I see modernism as a time of experimentation, filled with successes and failures, but not so many masterpieces. And I appreciate post modern art less so. I see most of it as comedy parading as art, with some important exceptions. Comedy can be great, as can shock value. Here'a a good example: 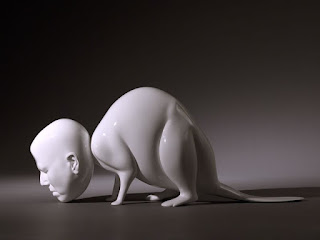 But, the question remains - is it as great as an artwork that is based on more than that? Besides, this list isn't my 100 favorite artists. It’s the 100 artists I see as deserving the most respect. In that light, it’s hard for a work that’s simply shocking or comical to compete with the power of a serious, emotional work of art (although a few made it in!). I've tried to separate my personal bias, selecting artists who had the biggest goals, and made the best art, for the best of reasons. I'll try to explain my reasoning as I go along. Also, bear in mind, I evaluated thousands of artists here, and almost all of them were great. Just because an artist didn’t make the cut, doesn’t mean she wasn’t excellent.

Which Kinds of Artists Did You Include?
I've limited my list to visual arts. There are so many talented singers, musicians, dancers, actors, and writers that they each deserve separate lists. I included painters, sculptors, photographers, cartoonists, fashion designers, and architects in my research, but I have to say, very few women outside the strict definition of fine arts made it in. I’m not concerned with providing a variety of works in different media, like an art buffet. I’m genuinely curious who deserves the most credit, and I want to answer this to the extent it’s possible.

What Was the Selection Process?
I had no funding for this; it’s a personal project relying solely on Google. I've had to rely on websites that are not strictly professional or scholarly, so it’s possible I’ve made mistakes, or am repeating mistakes made by others. I know this isn’t ideal, and there's no comparison with going to see the work in person, but it’s the best I could do with what I have.
Starting in college, I made lists of art I liked from numerous museum and gallery visits, and from books. I spent one year studying in Florence, Italy, where I went to all the major museums. I took trips to Rome, Milan, and beyond to all the museums I could find in Barcelona, Madrid, Paris, Amsterdam, Vienna, Prague, Berlin, and so on. The artists I’ve selected stem from those lists, which I transferred into MS word.
I then searched online for lists of women artists on sites like Wikipedia, The Athenaeum.org, various blogs, such as Today's Inspiration (covering famous illustrators), Character Design Blog, Figuration Feminine, Women Painting Women, Art Odyssey (a blog now gone), and Underpaintings (covering contemporary realists, now no longer available - the creator took down his content and put it on a new subscription-based website), and PorAmor Al Arte. It’s sad to consider how many of these websites are no longer on the net – they’re not simply offline, but the content’s disappeared! It’s a major setback for other researchers, and I’m glad I saved what I could on my hard drive. Later I joined a page on Facebook titled Female Artists in History. And, I followed many artists on their blogs and websites. For every artist, I did a separate Google search to see what images I could find.
This gives me a limited view. I only get to see that which others were willing and able to upload. I’m sure many great works still haven’t made it to the Internet. (If you know of any, please post it!) It gives an unfair advantage to contemporary artists who often make their own websites and present their best art with professional quality photos, whereas artists from previous eras are left up to fans to do this work, often scanning inferior quality images from old books.
I’m also limited by my language, although I do speak a couple. I assume I’ve omitted hundreds of artists who weren’t listed on the English language websites I visited. Then, there are many names in these languages where I can’t recognize the gender. As a result, most artists on my list are American, which honestly surprised me. I wonder if this is simply a product of my latent bias, or if America has some special qualities that lead artists here. It seems so, as many of the artists in question were born elsewhere and moved to the US. So, it’s made me simultaneously proud to be American, nervous that I may be off base, and perplexed.
What I’m saying is, my methods are far from ideal, and the list is imperfect (as are all lists). I know that, but don’t go! Please, hold on and take a look. The main purpose isn’t perfection, but promotion and inspiration, and to start the debate, giving these artists the attention they deserve. I encourage everyone to post comments and suggestions, and to create your own lists.

What About Censorship? What Have You Omitted?
Yes, unfortunately, I started this project with K-12 students in mind. There were many instances where an artist focused on nudes, making incredible pictures which I decided not to show or consider. I have nothing against nudity in art. I just need this list to be age appropriate, and I know it’s not fair, but that’s how it has to be. That said, I'm making this, biased, censored Top 100 List so it exists, however flawed, and people will finally have a basis to begin all the debates, jabs, boasts, and criticisms that male artists have been enjoying for centuries. Who knows, maybe someone will eventually add them to the history books? Because, as of now, only three of them are ever mentioned, often only in passing.