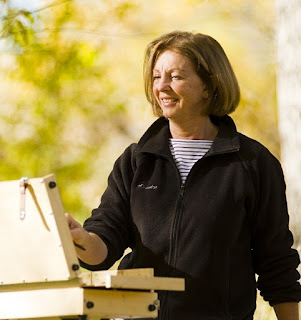 Sheri Farabaugh is an incredible realist painter from Thornton, Colorado and Surprise, Arizona. She has won numerous awards including three Best in Shows from the Louisville Art Assoc., five awards of excellence from various organizations, two Artist Choice Awards, and a Creative Achievement award from the International Guild of Realism. Sheri is a signature member of the Oil Painters of America, the American Society of Marine Artists, and American Women Artists. She has been featured in International Artist, Southwest Art, and Fine Art Connoisseur magazines. 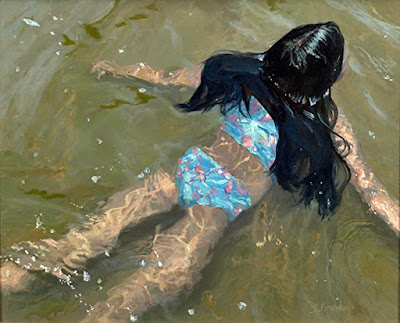 Like Yuko Shimizu, Dana Hawk, and other artists on this list, Sheri's career path took several turns before coming to fine art. She worked as an accountant, a realtor, and a brewing chemist. She didn't begin painting full-time till she was 52. Sheri states in this article by Charles Robinson (Fine Art Connoisseur, 2016):

"When I started painting, I read every art magazine and took every art class possible. I couldn’t get enough. I hadn’t been captivated by anything I did before: when people spoke of being passionate about something, I couldn’t imagine what they were talking about. And I really couldn’t imagine finding it in accounting. Now I understand, and life is much more rewarding." 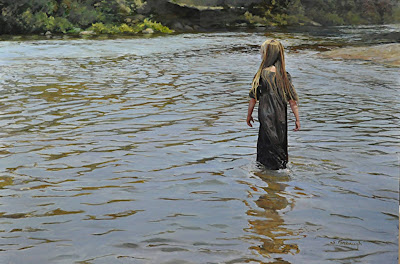 Sheri grew up in Wisconsin. She studied biochemistry at the U of Wisconsin in Madison, and then worked two years in quality control for the Miller Brewing Co. She then took a long backpacking tour through Europe and when she returned to the states, she moved to Colorado, and became a realtor - right as the market crashed. She then began working for Coors. She worked six years there, while studying accounting at night. Once she earned her degree, she opened her own business, which she ran successfully for over twenty years. Then, in 2005 she decided to retire and devote her time to painting. 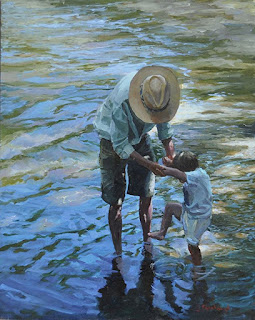 Sheri credits the art club in Surprise, Arizona for her new life as an artist, saying (Robinson, 2016):

"The art club has a wonderful studio and classroom with helpful people who made it easy to dive in. It has its own gallery, too, so even at an early stage I could exhibit. I got some of my works properly framed and ready for a show. I sold four out of six, and I was hooked.”

Sheri also studied six years at the Art Students League of Denver (modeled after the one in NYC). She stated, “The League had a huge influence on me: my composition philosophy, value, vocabulary — they all come from the ASLD. I really had a lucky experience being encouraged to immediately exhibit and sell. I would encourage anyone painting seriously to enter shows and join clubs that offer opportunities to put their art in front of others.” 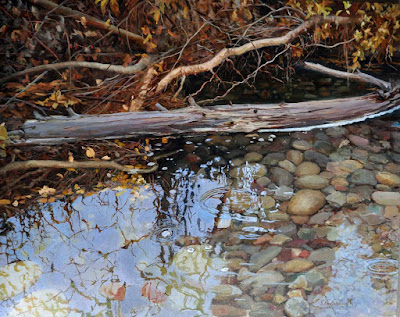 Sheri says on her website, "Finding beauty in the details has led me to a realistic style, and I am drawn to bold values and intricate patterns.  I paint many subjects, but a fascination with the reflections and patterns of moving water led me to paint rivers, lakes, ponds, and puddles of the West and Midwest."

She explains further (Robinson, 2016): “My affinity for water came about during summers swimming, rowing, fishing, and skiing at my grandparents’ cottage in Wisconsin. I love to capture the movement, transparency, and reflections that captivated me as a child.”

'A Bank in the Woods'

Sheri sees a comparison between the intricacies of chemistry with that of painting and composition. She says (Robinson, 2016): "Sometimes, on Saturdays, my chemist father would take me to his lab briefly to check on tests he was running. So instead of dolls, I played with chemistry sets and craft kits at home. That led to my degree in biochemistry — to understand on a molecular level how our bodies produce energy seemed like magic to me. So now, taking a subject with a complicated, impossible-looking surface and distilling its difficult sections into do-able pieces, then putting it all together, is where I find much of my enjoyment. Watching something come to life is a thrill.” 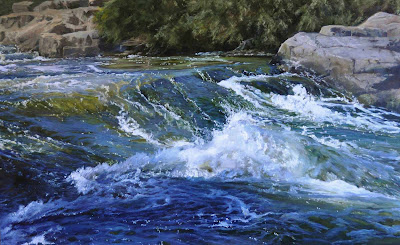 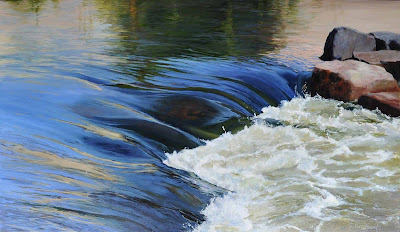 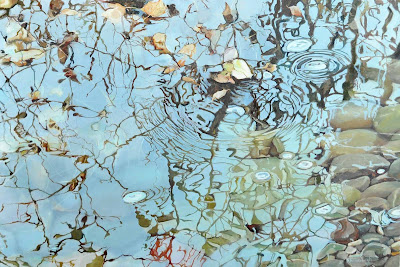 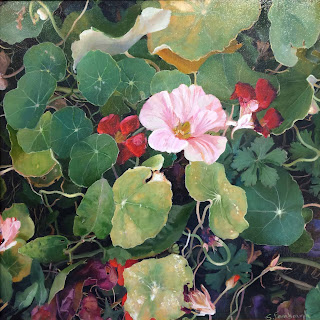 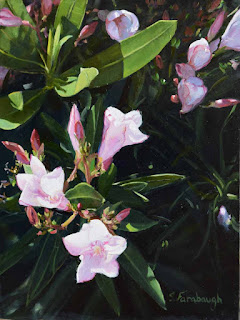 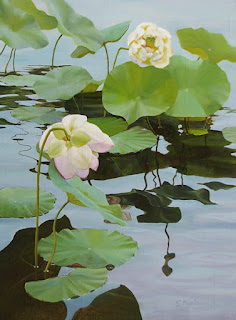 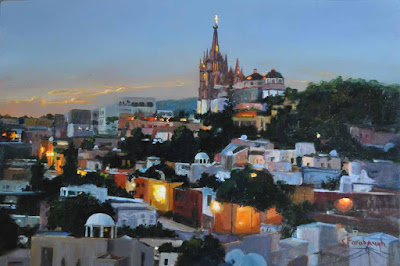 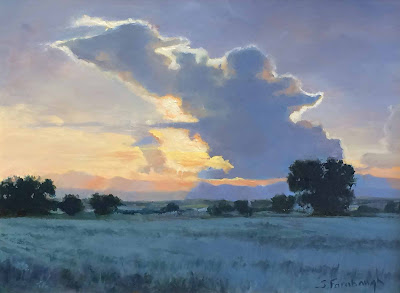 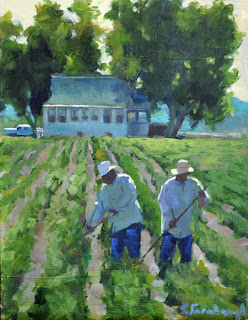 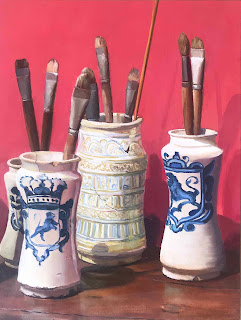 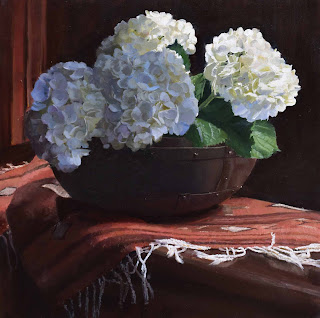 'Hydrangeas in an Iron Bowl' 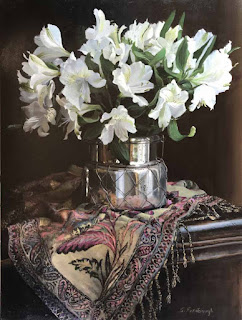