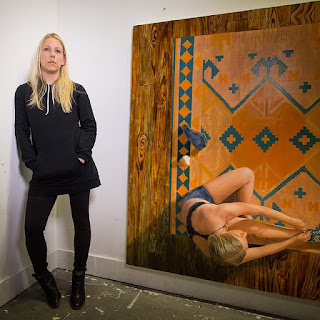 "Art isn't always pretty, decorative or easily digested. Art sparks dialogue that might not otherwise happen. I'm particularly fond of artists who make us ask and deal with tough questions."

Karen Ann Myers is an amazing and meticulous painter from Charleston, South Carolina. She is a professor at the College of Charleston, a printmaking instructor at the Redux Contemporary Art Center, and assistant director at the Halsey Institute of Contemporary Art. She has won a Gold Addy Award, the Louis B Sudler Prize, the Ralph Hendrickson Award, and several college scholarships, and she has exhibited her work throughout the US. She has also been featured in American Art Collector, New American Paintings, and many other publications. 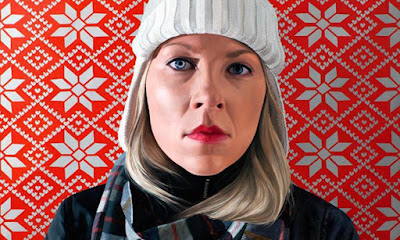 Karen Myers was born in Grand Rapids Michigan. In this interview (Empty Kingdom, 2014) she mentions her Finnish ancestry and says she always loved and made art. In high school she was a competitive gymnast. She studied art and women's studies at Michigan State U, and earned her MFA at Boston University. Soon after she moved to Charleston, South Carolina. Every year she paints a large-format self portrait like the one above, to record, like a diary her development, age, and experiences. 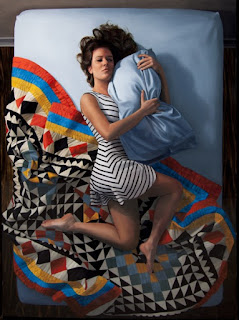 Karen Myers paints one subject exclusively and obsessively: women in interiors, often alone, often staring at the viewer, covered and surrounded in beautiful, bright, and luxurious patterns, like a kind of therapy against existential angst. On her website, Karen explains them thus:

"I am investigating the psychological complexity of women through intimate observations in the bedroom. The work is inspired by the cult of beauty in contemporary mass media. Intricately painted, decorative interiors are invented to titillate the viewer."

These decorative patterns do titillate, but they do more than that. They're intimately connected to her models, signalling something about their spirit and demeanor through the visual language of color and shape. Karen reveals more about her patterns in this article by Erica Jackson (Charleston City Paper, 2013)

"In some paintings I think the pattern dominates over the figure and that creates an interesting environment, because then the viewer is confused about what they should be looking at, and I kind of enjoy that. They're in competition with each other for viewers' attention." 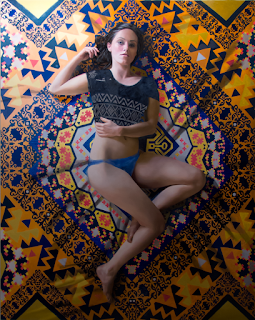 “I think of all my paintings as psychological self-portraits, whether I am painting myself or someone else. These portraits are my version of a written diary. Each painting marks a specific time in my life and documents the objects of importance at that time. They are short stories, mini-narratives influenced by my intimate experiences with friends, family, and lovers.”

She adds in an interview with Artist A Day (2010), " I am exploring what it means to be a woman in today’s society. While my solitary female figures are strong and confident in their sexuality, these paintings also offer a glimpse into the confusion and doubt felt by women in their moments alone." 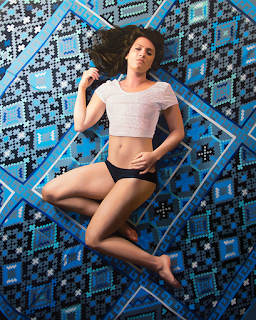 "The paintings began as an investigation of myself, so they're really deeply rooted in self-portraiture," Myers says. "In some ways I still think of these as being self-portraits, and these friends of mine are stand-ins for me. My identity is sort of defined by my relationships with my friends, my sisters, and family members.
"It would get boring to paint a ton of paintings of myself. And, I've done that. There was a time when I was only doing paintings of myself for many, many years, so I feel like I've made way too many paintings of myself." 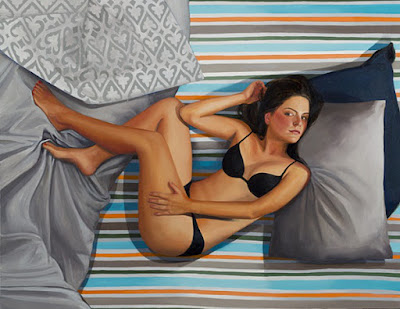 Karen talks about her models in this feature for Four Magazine (2013):

"The women in my paintings are women I know personally, and I strive to represent some part of their personality. They are strong, beautiful, independent and complex. It's my job, as the artist, to capture their innate quality and translate it into a painting." 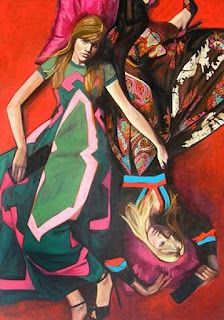 ''
Karen explains the themes of her work here (Jackson, 2013):
"It does have to do with intimacy, the power of sexuality. I think that it's a complicated time for women to understand the power of their sexuality, especially beautiful women. It's a really powerful thing filled with all sorts of complexities and so the paintings are also a lot about vulnerability, intimacy. In some ways it's about my love of that and also my disgust of that and how the mass media affects women. We're bombarded with these advertisements of really beautiful women, and that affects the kind of work that I do.
"I'm not trying to make this big, bold, preachy statement, because I don't know that I have a statement to make yet. I'm still investigating it and trying to understand, to investigate human psychology, specifically young female psychology. And for me human sexuality is a really interesting place to do that." 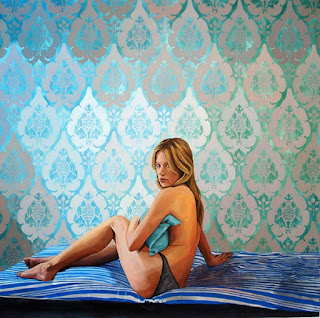 ". . . What I term as the cult of beauty is a fascinating phenomenon to me because it’s both powerfully attractive and disturbing at the same time. I don’t attempt in my paintings to define all that women are, because that can’t be done. I do not subscribe to the idea that sexual images of women inspire violence or promote the political oppression of women in our culture. . ."

". . . I am interested in frustrating my audience; the viewer wants to look at the irresistible woman on the bed, yet he/she is conflicted because of the equally beautiful rug on the floor. I am attracted to the vulnerability and power attached to beauty. They possess the same physical allure for me, as I’m sure they do for other people. However, I can’t see it as a realistic physical standard of appearance, which is why it may be troubling.

"I also want to capture a sense of contemplation within the figure surrounded by the chaotic world. My paintings highlight the connection between what is seen and what is felt by transforming an image into a tactile experience for the viewer."

"While not all the women are looking at the viewer, I feel like the model is more human and powerful when she is looking at the viewer. It’s a more engaging experience, maybe even confrontational. It’s too passive to have the figure looking away. When she’s looking at you it’s more inviting, but in a more jarring sort of way. It makes you uneasy. It involves you on an emotional level.

"The work is about being vulnerable, yet confident and self-assured. I like the tension between those two states of mind. I like that there can be both." 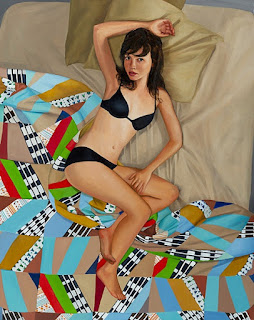 Karen does not use the traditional method of classical painting techniques, starting with sketches and thumbnails. Instead, she carefully composes collages digitally, mixing photos she's taken with images she's found online from many different searches. Karen describes the resulting interiors as "fantasies I wish I had." Once she has the picture exactly how she wants it, she transfers it onto a large canvas with a line drawing, and slowly, painstakingly paints every detail, usually mixing her colors before hand, and working one color at a time - sometimes for weeks before moving on to the next. As she says here (Jackson, 2013):

"Every time I start a painting, I look through my collection of photographs that I have taken of rugs, photographs of bedding, wherever . . . That's my version of a sketchbook . . . I'm the weird person in a restaurant saying, oooh, this chair's really awesome, and getting up and photographing it from an aerial perspective."

Each bed in her paintings is actually Karen's. She set up a ceiling mount to get the perfect angle for her photo shoots: 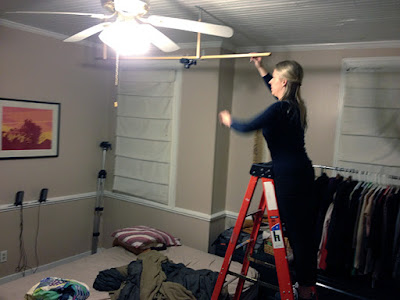 "The unique perspective of my paintings—with the viewer looking down into the scene—came to me almost accidentally. When I started painting from a bird’s eye view it was an aha moment. While painting from a normal point of view, my peers and mentors criticized the work for its flatness and lack of depth, but I liked that, especially how the patterns flatten out the space. I tried to figure out a way around it, to work out the lack of depth while maintaining the flatness that I enjoyed. So I started to look down, and that has fueled my work for many years. That aerial perspective has infinite possibilities. It puts the viewer in an interesting voyeuristic point of view." 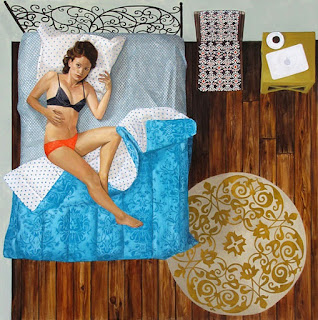 In terms of composition, Karen looks for similar shapes in her figures as she does in her decorative patterns - having models pose their arms and legs to form a variety of triangles. She says in this interview with Stacy Huggins (Visual Artist Profile, 2012):

“Successful art must have strong formal qualities and strong conceptual background. Just as much as the work is about female sexuality and power, it’s also about what the color blue looks like next to the color green. . . all lines in the pattern are also found in the human form . . . the two have a pretty serious conversation with each other.” 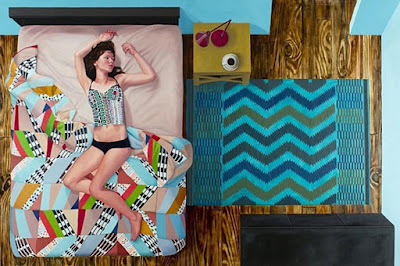 Karen lists many sources of inspiration. Favorite artists include Josef Albers, David Hockney, Alex Katz, Margherita Manzelli, and Dana Schutz. She is also strongly inspired by Mikalene Thomas, but her main sources for inspiration according to Celie Dailey (Daily Serving, 2010) are W Magazine, Vogue, Anthropologie and the Pottery Barn. 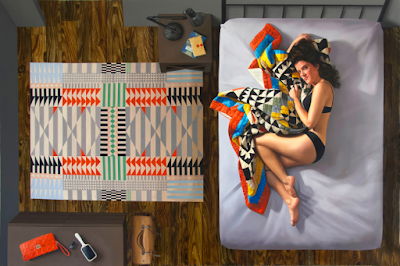 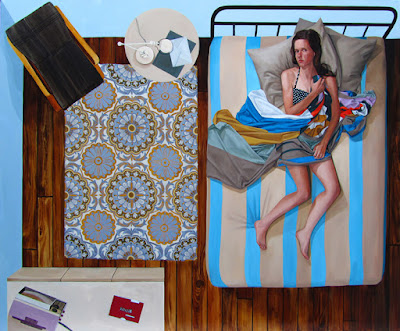 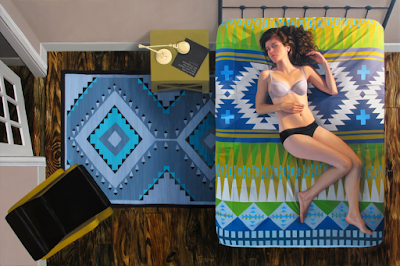 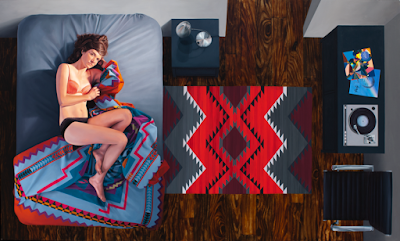 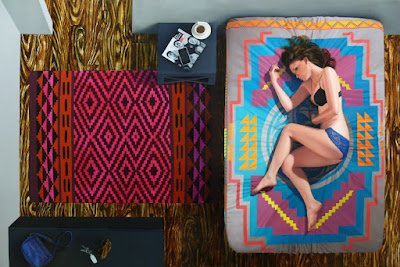 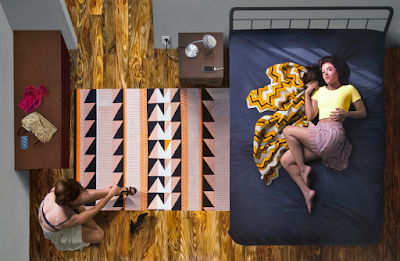 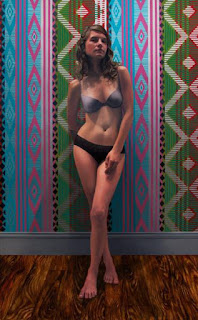 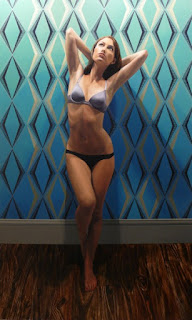 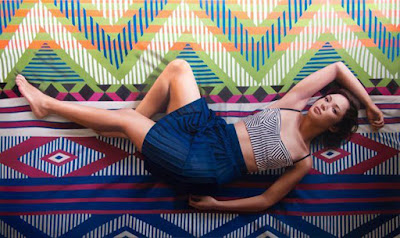