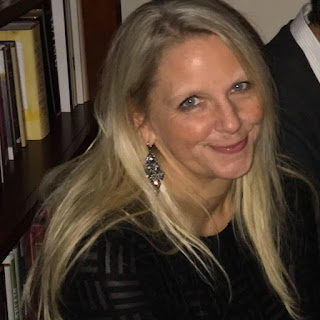 "My art is a different place and an escape from all that bores me. I like art that takes me on a wild ride, nothing short of that. I want to be hurt and delighted at the same time, to explore the realms I didn’t know existed."

Pamela Wilson is a unique and stunning painter from Laguna Beach, California. Her works defy description, they fit few if any labels. As she describes on her website, "She explores the great chasm of the psyche, the abyss that opens when you seek to understand the complex human in modernity.  The characters in her paintings are often called “odd or mad,” or similar terms denoting something out of alignment with ordinary reality. She believes that letting ourselves explore the inherent “distortions” in reality is part of what gives us heart, and balance. Addressing “beauty” in a painting feels too passive, and what she is seeking is a psychological moment, a different kind of beauty, the beauty in absurdity." 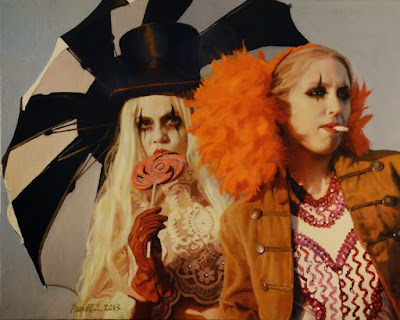 She goes further in this interview for Empty Kingdom (2011):

"If we will have a richer experience as human beings, we must involve ourselves with unsettling truths, as well as those which soothe. I have painted subjects in their own worlds for many years, incorporating strange and quirky imagery, and odd narratives, but with a sincere and deep compassion. Although we may be amused by these subjects, I think that we identify with them, as perhaps our security and sanity are threatened. As part of our human experience, we grapple with tragedy and delight, absurdity and insanity, collecting and storing pieces of ourselves and others as we decipher meaning. We engage ourselves in the exploration of emotions, ranging from utter joy to unbearable grief, to find a place for them, and measure their importance."

Pamela earned her BA from San Diego State U, and her MFA at the U of California in Santa Barbara where she won the Regent's Award and Fellowship. She's also won first place from the Portrait Society of America (2015). She has had 23 solo exhibitions throughout the US, and is frequently featured in magazines such as American Art Collector and Beautiful Bizarre. She now mentors for MFA students at the Laguna College of Art & Design. 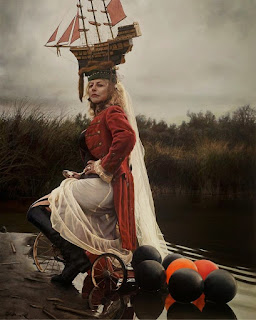 Pamela talks about her childhood in this interview with John Sebastian for The New York Optimist (TNWO, 2011):

"I have ten brothers and sisters, including step-siblings. It’s a bit crazy. I was born in Northern California, and spent my school years in Colorado, with summers in Southern California... on the beach. I moved back to California in 1984, and have lived here since. I moved to Brooklyn for three months in 2006, when I was represented by Claire Oliver Gallery in Chelsea, but I was too homesick, and returned to California post haste. I love my beach.

"Apparently, at the age of three or four, I drew a table and chairs in perspective, and my family decided immediately that I was an artist. I jumped on the bandwagon and never looked back. I was always drawing, but I hated coloring in coloring books, as I couldn't stay inside the lines like my big sister (who hogged all the unbroken crayons anyway- because she was convinced that she was the queen of the world). I did try, however, to convince her that she needed to push on the crayon and make the color brighter. She ignored me completely, and her pictures looked so pale to me.

"I started painting in my last year of High School, with a portrait of my little brothers. Some of the other teachers liked it, and commissioned me to do portraits of their children. My art teacher, Sally Christiansen, was extremely encouraging and instrumental in my confidence as a young artist. We have stayed in touch all these thirty years." 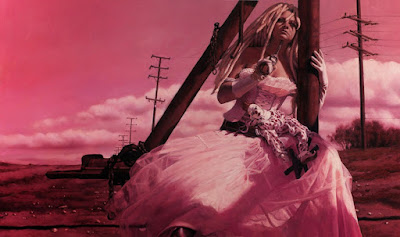 "The planning of paintings is an elaborate project for me, and so very enjoyable. I let my intuition be my guide as I settle into a new world. I usually begin with some idea that comes to me through my personal experience, and my daily “pleasure reading.” I then spend time antique shopping, waiting for the next object(s) to ‘speak” to me. I must see and smell and touch an object or piece of clothing that will become the impetus for a painting, or series. I love antiques because I like to take things out of the modern context and marry “odd ends” together to render a timeless piece- more dreamlike. Old objects house talkative ghosts. And then I pick a model and a location- both as important as the object, requiring much scouting. The photos never look in the end like they did in my head, but it’s always wonderful when it comes together! And then I paint from my photographs, and edit as I go. I usually paint more than one painting from a shoot, as I’m never satisfied with just one."

In TNWO, she goes further, "Color is everything. Not only color, but value, and the keen use of each. One must marry the right value with the right color in order to create the mood of a painting- or the “soul,” as I like to call it. The knowing of when to use a lot of color, or to mute it, is a skill gained through practice, and the more one is proficient with it, the more expressive the piece, the more possibilities.." 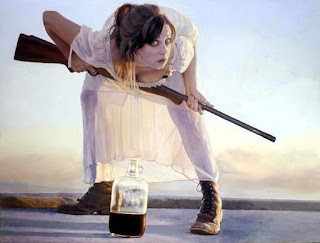 She discusses titles in this interview with Mark Reep (Ramshackle Review, 2010):

"I think there is one painting that is entitled 'Untitled'. Just the one. I resisted fiercely in graduate school this requirement to explain my work in a paragraph next to it. I always felt keenly that art is a different language, that it is actually 'between language,' if you will, and that if one needed to explain it - one might as well write an essay on the subject, and forget the art. But I always loved titles, strangely. They started as a clue... and have become an added piece of the art. They are like poetry for me, and another way in which to express myself, and add depth to the piece. The piece always tells me what the title is as I am working on it; somewhere in the process, it comes to me." 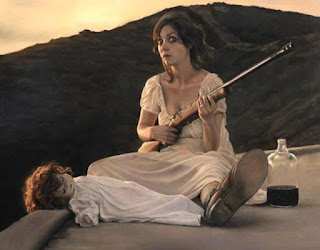 She also explains how her art work has progressed to get to where it is today:

"After oil painting, uninspired, for years, I found a strong and explosive interest in B/W photography. I was first inspired by the work of Diane Arbus, and the painted B/W photographs of Anselm Kiefer. I then became a lithographer, appropriating well-known images and altering them on the stone. I then started painting with oils on my own photographs, eventually returning to painting on canvas, first copying found B/W photographs, and eventually capturing and painting my own. I think I tried to hang on to, or create, the realistic feel of the B/W images, and the somewhat dreamlike, “ghosty” feel of a time long gone.

"Then I discovered color- and was completely consumed with it for years!! A very timely meeting with someone I very much respect brought to my attention what I had lost in all the color. I reflected on his words for a few weeks, and suddenly I could see exactly what he was seeing/saying. I decided to try to recapture that “old-timey” feel, and the sepia palette has been creeping back in in the last couple of years. It’s harder than it might seem to ween oneself from color, but I think it serves my work to dress it down a bit. I am very excited at where I can go from here." 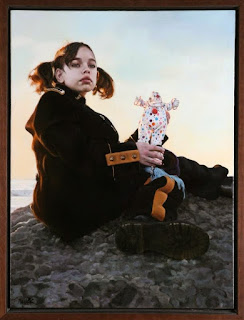 Regarding artistic influences she says in the same interview, "Right now… I’m stuck on Justin Mortimer and Jeremy Geddes. These are artists whose use of space and color and technique just floors me. The unexpected composition and illusive narrative content of the work astounds me. I am truly in awe." 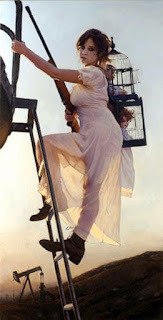 She then discusses her solo show, Bird Shot:

"Birdshot– Can mean so many things and is so fun to play with. As I said, it can be a bullet, a gunshot, a dead bird, a woman down, and disease that blinds one slowly, a woman or girl who has been shot, a bird that’s been strangled. I expect that “birdshit” will emerge at some point- haha.. On a serious note- the work is about being put down, and getting back up- It’s about the strength one didn’t know one had- to fight back. Strength and a bit of oddity mixed in. Even a ghost. I listened to CocoRosie the whole time I created this show- and I think they influenced my mood in the way I wanted to go. The work is layered for those who spend some time looking. I hope they will.

"Inspiration has its own schedule, of course. I had planned to have a model carry a taxidermy pheasant in a shoot one day last year- a shoot loosely regarding a treacherous escape- when suddenly I decided to mount the bird on her head. Simultaneously, I had been joking to friends that I had not experienced a flying dream for quite awhile (I used to have them regularly), and I started a plight wherein I tried to make myself fly in my sleep again. I wondered what I could do during the day, including envisioning birds, reading about aviation, staring at helium balloons, demanding it of the sleep-Gods, and the like, that could force this dream into my subconscious at night. It became a game, and then…. a seriously delicious subject for art. My entire thought process had a winged epiphany on the day of the shoot, and a bird theme took over. What is a dream? Why do we fly so adeptly in our dreams, so fearlessly?"
Pamelawilsonfineart.com
Facebook Page
Instagram Account 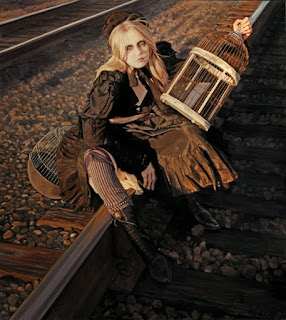 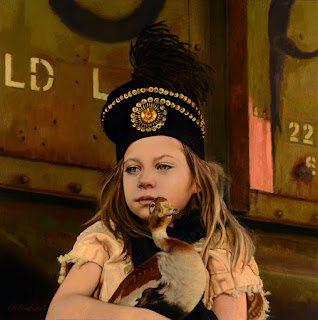 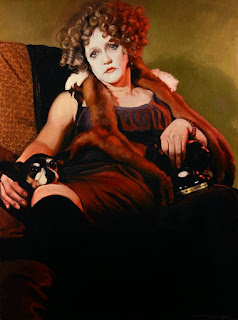 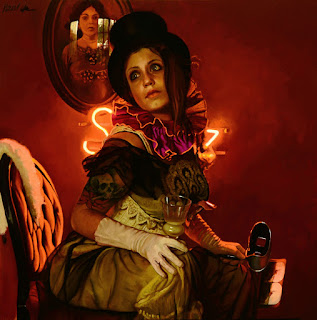 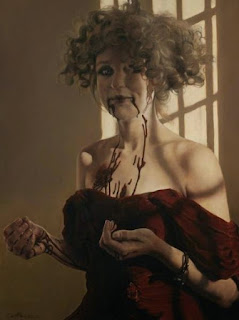 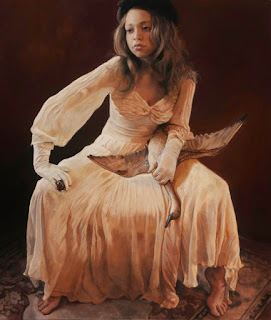 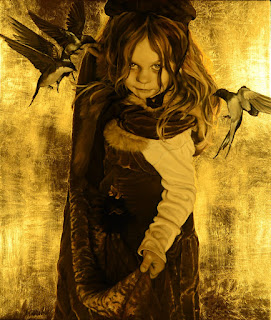 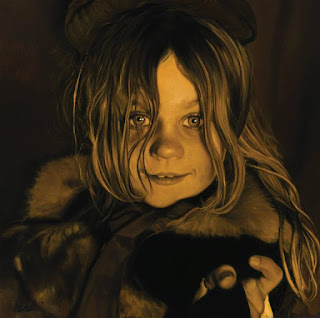