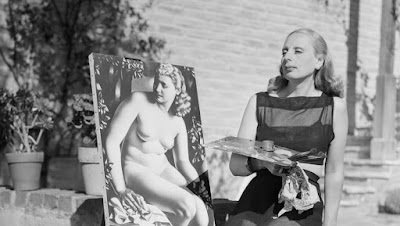 Tamara de Lempicka was a famous model and award-winning Art Deco painter of high society, first in Paris, and then moving to the US, at the start of World War II. She painted stylized portraits, mixing elements of Cubism and Neoclassicism, for a look that was modern yet elegant and refined. She was the only Art Deco painter to focus almost exclusively on portraits. John Krizanc wrote a play about her life, Tamara, which ran in Los Angeles from 1984-6. Kreitzer and Gould wrote a musical titled Lempicka, which premiered in 2018 at the Williamstown Theatre Festival. Her art is now collected in all major modern art museums, and sell at auction for millions of dollars. 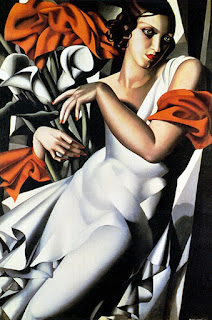 Tamara was born in Warsaw, Poland, which at the time was still part of the Russian Empire. Her father was Jewish, and an attorney for a large French company. Her mother, Malvina, was a socialite who spent most of her time touring Europe. Tamara showed confidence and skill in drawing at a young age. When she was ten, her mother hired an artist to draw her portrait in pastel. Dissatisfied with it, Tamara took the pastels to draw her younger sister - Tamara's first portrait.

At age 13, her parents sent her to boarding school in Switzerland (they divorced soon after). Tamara found the school boring, so she pretended to be ill so she could leave. Her grandmother picked her up, and took her on a tour of Italy, where Tamara developed her love of art. Next, she moved to St. Petersburg, Russia, to live with her aunt Stefa. There, at age 17, she fell in love with Tadeusz Lempicki, a lawyer. The next year they were married. 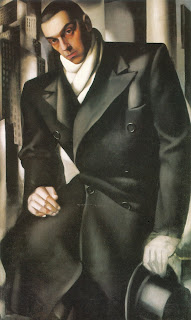 Crisis struck the following year, 1917 as the Russian Revolution overturned everything. Tadeusz was arrested in the middle of the night, and Tamara saved him, first searching all the prisons for him. Then, through her connections at the Swedish embassy, they were able to escape to Paris, where the rest of her family had fled. 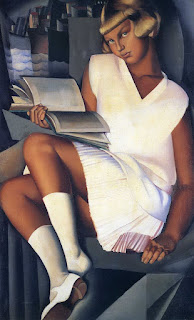 In Paris, she found herself in need of money for the first time in her life. Her husband was in no position to work, and her family was selling off all their jewelry, and she was pregnant with her daughter, 'Kizette'. So, Tamara took up painting, studying first at the Académie de la Grande Chaumière with Maurice Denis, and then Andre Lhote, whose "soft" Cubist works made quite an impression on her: 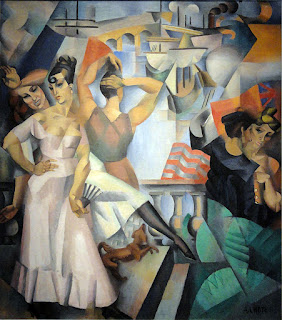 Tamara was also deeply impressed with the Neo-Classical works of Jean Domenique Ingres, who painted elegant, if distorted images of women: 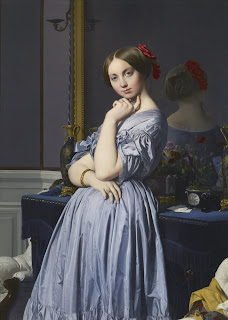 'Portrait of Comtesse d'Haussonville' by Ingres, 1845

In 1925 Tamara, who was signing her works 'Lempizki' the masculine form of her name, became famous for her works in the Int. Exhibition of Modern Decorative & Industrial Arts - a world's fair held in Paris that gave rise to the art movement/aesthetic style now known as Art Deco. In this same year, she also organized her first solo show in Milan, Italy, painting 28 works in just six months.

In 1927 she won first prize in the Exposition Internationale des Beaux Arts in Bordeaux for her portrait, 'Kizette on the Balcony': 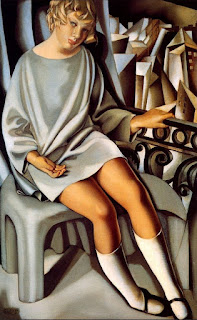 The next year, Tamara divorced her husband and became the mistress of a wealthy art collector, Baron Raoul Kuffner. He paid for a luxurious Parisian apartment, and in 1929 Tamara traveled to the US, for a successful exhibition in Pittsburgh, PA. Unfortunately all her money was lost when her bank collapsed at the start of the Great Depression that fall. When she wrote to her mother Malvina, that she wouldn't be returning from the US that year, her mother was so angry she burned Tamara's large collection of expensive hats. Kizette watched her do it, one by one.


Luckily for her, her fame was at its peak, and she was commissioned to paint wealthy people all over the US and Europe, including King Alfonso XIII of Spain, and Queen Elizabeth of Greece. In 1933 Baron Kuffner's wife died, and Tamara then married him. 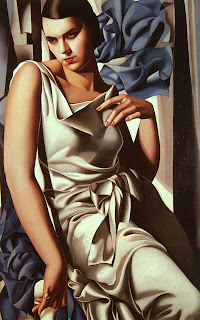 As the Nazis rose to power, Tamara convinced her new husband to sell all his lands in Hungary, and invest instead in Switzerland. At the start of the 2nd World War, they moved to Beverly Hills, CA, and later to New York City. Kizette was stuck in Nazi-occupied Paris, but Tamara managed to smuggle her to Lisbon, and then to the US. While in LA, Tamara visited Hollywood studios, and became known as the "baroness with a brush" painting celebrities there. Madonna, Jack Nicholson, and Barbara Streisand have collected her works.

Kizette fell in love and married a Texan geologist. In America, Tamara continued exhibiting but her style was now considered old-fashioned, gaining fewer commissions and less interest. She attempted moving into abstract expressionism, painting with a palette knife, but her heart wasn't in it, and galleries showed little interest. 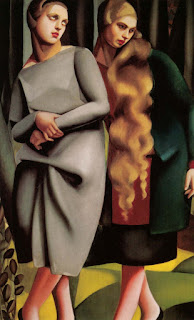 Tamara told her daughter (Phillips, 1987), "I was the first woman to make clear paintings, and that was the origin of my success. Among a hundred canvases, mine were always recognizable. The galleries tended to show my pictures in the best rooms, because they attracted people. My work was clear and finished. I looked around me and could only see the total destruction of painting. The banality in which art had sunk gave me a feeling of disgust. I was searching for a craft that no longer existed; I worked quickly with a delicate brush. I was in search of technique, craft, simplicity and good taste. My goal: never copy. Create a new style, with luminous and brilliant colors, rediscover the elegance of my models."

Tamara looked unfavorably on Picasso, saying his work and style embodied, "the novelty of destruction". 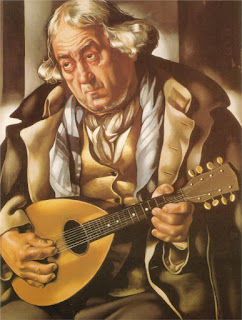 'Beggar with a Mandolin'

In 1961, Tamara's husband died. Afterwards, she sold most of her possessions and used the money to travel around the world three times. She then moved to Houston, Texas to live near her daughter and her family. Then in 1974, Tamara moved to Cuernavaca, Mexico. Kizette cared for her following the death of her husband in 1979. Tamara died in her sleep in March of 1980, and her ashes were scattered in the volcano, Popocatépetl. 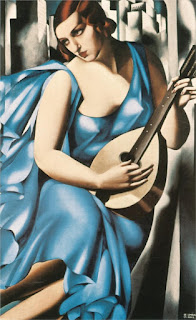 'Woman in Blue with a Guitar' 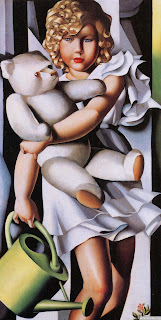 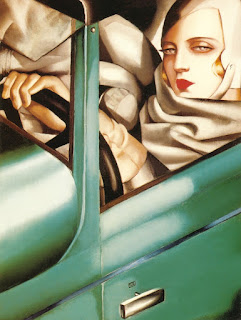 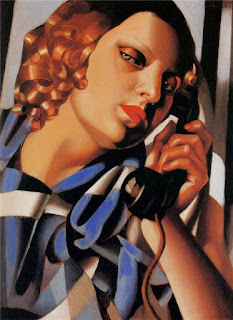 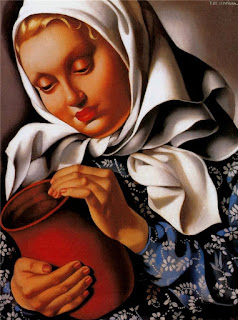 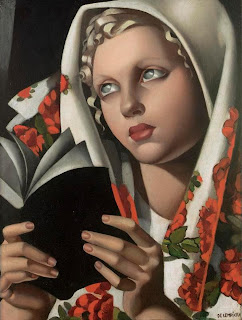 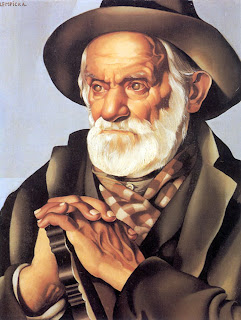 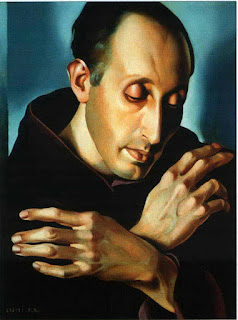 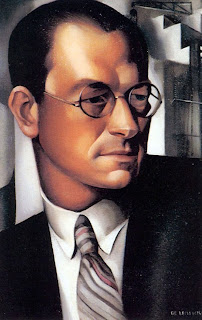 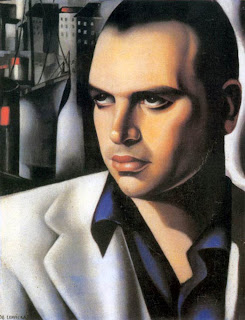 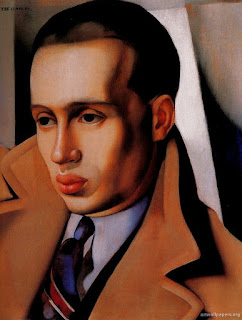 'Portrait of a Man with his Collar Turned Up' 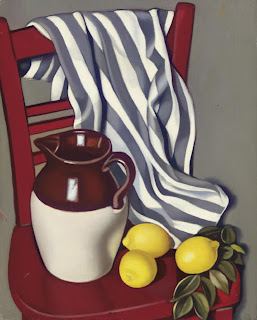 'Pitcher and Lemons on a Chair' 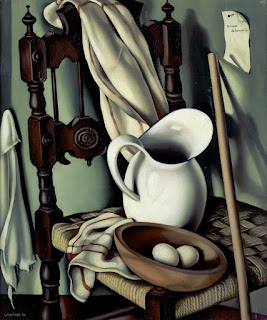 Some notes taken from Tamara-de-Lempicka.org and from Celebre Magazine