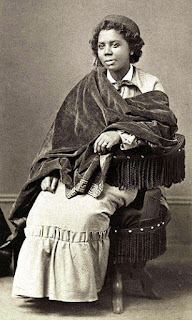 “There is nothing so beautiful as the free forest. To catch a fish when you are hungry, cut the boughs of a tree, make a fire to roast it, and eat it in the open air, is the greatest of all luxuries. I would not stay a week pent up in cities, if it were not for my passion for art.” — Edmonia Lewis, quoted in ​“Letter From L. Maria Child,” National Anti-Slavery Standard, 27 Feb. 1864.

Mary Edmonia Lewis, who went by her middle name (like me) was the first African-American and Native-American woman to achieve international fame and recognition as an artist. She spent most her life in Rome, Italy, where she sculpted neoclassical busts and figures in marble. In 2002, Molefi Asante placed her 57th on his list of the 100 Greatest African-Americans. 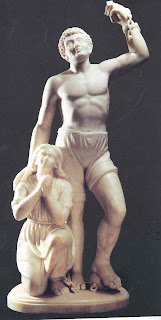 'Forever Free', 1867 - celebrating the end of the Civil War and the emancipation of slavery

Edmonia was born free in the town of Greenbush, New York (now Rensselaer). Her father, a servant, was Haitian and her mother was half black and half Mississauga Ojibwe (Chippewa). Her mother was a skilled weaver and craftsman and was an inspiration to young Edmonia. Unfortunately, her father died when she was three, and her mother when she was nine. Both Edmonia and her older brother Sam were taken in by two aunts, near Niagara Falls. Sam, age 12 by now, became a barber to make ends meet. Emonia, who now went by her Native name, Wildfire, sold Ojibwe baskets and moccassins to tourists, with her aunts. 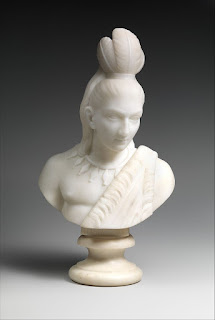 At age 12, Edmonia enrolled at New York Central College, a leading abolitionist school, her tuition paid for by her brother who was now living in San Francisco. Edmonia later spoke of her schooling, "Until I was twelve years old I led this wandering life, fishing and swimming ... and making moccasins. I was then sent to school for three years in [McGrawville], but was declared to be wild,—they could do nothing with me." 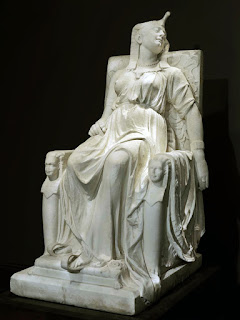 At 15, Sam sent her to Oberlin Academy Prep School in Ohio for a three-year course, studying art (She also added Mary to her name). At the time, Oberlin was one of the only coed, integrated schools in the country (out of a thousand students, only 30 were people of color - but it was a start!). Actually, it wasn't much of a start. Edmonia later complained of daily racism and sexism there - that female students were rarely permitted to speak in class or at public gatherings.

Even worse, Edmonia once gave her two white friends some spiced wine and they got sick. Even though there was no trace of poison in their systems, and the two women fully recovered, Edmonia was dragged out into a field, beaten, and left for dead. She survived, but was soon put on trial for attempted murder. Amazing she was acquitted - she was represented by John Langston, Oberlin's only black attorney at the time. Despite her acquittal, Edmonia was ostracized by the town. Her assailants were never found, and over the course of that year (1863) she was accused again - this time of stealing art supplies. She was again acquitted for lack of evidence, but the school refused to let her finish the year, effectively expelling her. As soon as she could, she left for Boston, Massuchusetts, and began her career as a sculptor. 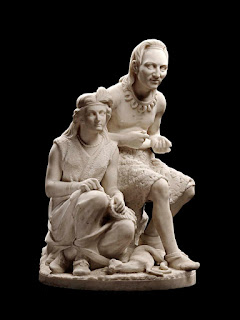 Edmonia had a letter on her behalf, written by the Rev. John Keeps, which she gave to William Garrison, a leading abolitionist in Boston. He introduced her to several sculptors and journalists in the area. One of these artists, Edward Brackett agreed to teach her, having her copy his works in clay. This lasted for a year until the two had a disagreement and parted ways. Meanwhile, stories about the artist soon appeared in Abolitionist newspapers, such as The Independent, the Broken Fetter, and the Christian Register. 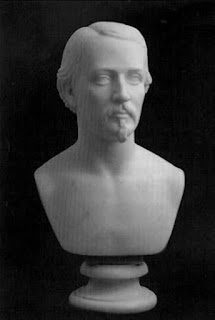 Edmonia was inspired by leading abolitionist figures, and jumped at the chance to sculpt a bust of Col. Robert Shaw, leader of the first all-black regiment in the Civil War. After she sold it to his family, she made 100 plaster copies, selling them all at $15 a piece, earning enough money to sail off to Rome, Italy in 1866. As she later told the New York Times, “I was practically driven to Rome, in order to obtain the opportunities for art culture, and to find a social atmosphere where I was not constantly reminded of my color. The land of liberty had no room for a colored sculptor.”

Before leaving, she also sculpted several works based on Longfellow's poem 'The Song of Hiawatha', retelling an old Ojibwe legend. In 1869, Longfellow traveled to Rome to visit her studio, and she sculpted his portrait. 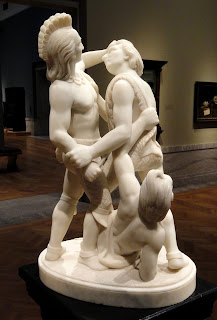 In Rome, Edmonia was given space to work in Hiram Powers's studio. As a devout Catholic, Rome was a perfect fit, and allowed her greater freedom than she had enjoyed in the US. The art of Rome had a big influence on her work - she often presented people either nude or in long flowing robes, as in the renaissance. Edmonia also insisted in doing all of her sculptures by herself, which was uncommon, as most male sculptors there only made smaller wax models and had craftsmen copy them in marble. Edmonia's friend, Harriet Hossmer, did the same as her - they didn't want anyone taking away their credit.

Luckily that didn't happen. Edmonia became a celebrity, as many wealthy tourists came to visit her studio, including celebrities like Frederick Douglass. Edmonia soon received very large commissions for her work, exhibiting in Chicago in 1870, San Francisco in 1872, and again in Philadelphia in 1876, this time with the mammoth statue of 'The Death of Cleopatra'. The next year, she was commissioned by President Grant to sculpt his portrait. In 1895 she sculpted a bust of Mass. Senator Charles Sumner at the Atlanta Exposition in Georgia. 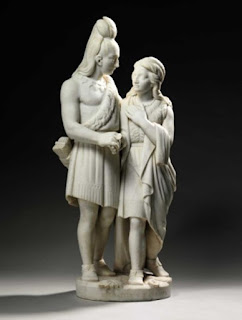 'The Marriage of Hiawatha',

Unfortunately, as modernism took hold at the turn of the 20th century, Edmonia's Neoclassical style went out of fashion, as did her fame. In 1901 she moved to London, and no one knows what happened to her next, except that she died of kidney failure. Her grave was missing until historians discovered it in 2017. Edmonia never married or had children. Her sculptures were her children. 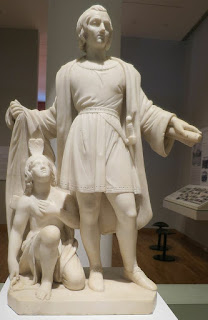 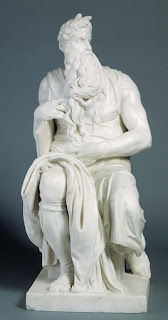 In the Bible, Hagar was victim to Sarah's jealousy, demanding that Abraha send her alone into the forest. In this sculpture, Hagar symbolizes the African-American mother, strong and pious despite the suffering she endured. 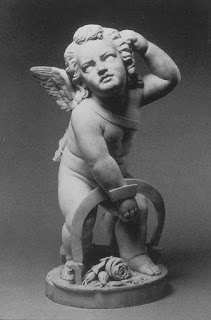 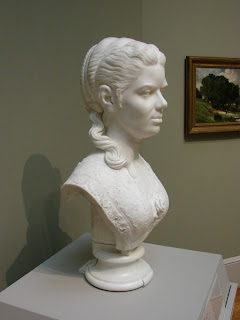 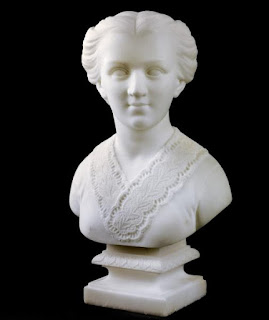 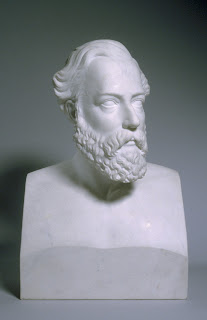 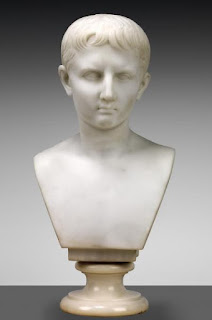 Some notes taken from the Smithsonian American Art Museum and from this NY Times article.