So, I’m an art teacher. In 2015 I was working at a secondary language school (in Slovakia), and my limited syllabus allowed for one lesson on feminism in art. Most of my students were girls, who generally didn’t consider themselves artists, and were planning to go into medicine, travel, or teaching. As an artist this always bothers me because, no matter who you are or what your profession, you always benefit from art training. It enriches your life.
So, I’m planning this lesson, and wondering how to broach the two main components of this topic, which are:

1) how women are portrayed in art (by men)
2) how women artists have been (and still are) discriminated against, and why.

I focused on the latter, mostly because the former requires a long list of images that’d be awkward to show, and I think is fairly self-explanatory.

How Bad is Discrimination Against Women in Art?
It’s pretty bad. Start with this question. Can you name a woman artist? If so, is she famous, or someone local? In your family? How many famous women artists can you name? Can you name one still living? If not, don’t blame yourself. Many museums, even modern ones, have only 1-2% women artists represented in their collections. There are several reasons, and it’s not entirely sexism… but yeah, it’s mostly sexism, historically speaking.
First of all, women were generally not allowed to learn the major trades of art making: painting, sculpture, and architecture. For most of human history, these crafts were extremely expensive endeavors and controlled by guilds, which were for men only. Crafts acceptable for women included certain textiles and embroidery, silverware, ceramics, and glassworks. The greatest companies for these crafts treated women like factory workers, leaving their work nameless, sold privately, and often lost over time.
In the 19th century, some privileged women began attending universities where arts education became popular, leading to many promising new artists. Of course, they weren't chosen for their artistic potential so much as for money - struggling artists realized there was a lot of profit in setting up schools for high-society ladies, not just in tuition, but in schmoozing with their rich parents. And, it was considered improper/immoral for a woman student to draw nude models, so they were forced to draw plaster casts and reproductions of figures - making it easier to call them mere copyists.
But, although women were now allowed to make art, society still held barriers to success. Women were mostly not allowed to own property, so the sale and profits of their work were often left to men, be it a husband, father, or some other manager. In fact a lot of the leading artists of the time had wives who painted, but got stuck inside their husbands' shadows. These women were expected to be wives and mothers foremost, and artists second, and without money, were at the mercy of their families for supplies. Then there were the art critics who wrote for important newspapers. These were all men, and often gave women’s work poor reviews. Many galleries acted likewise, even well into the 20th century.
As modernism took hold, critics and galleries began hunting for fresh new ideas and movements, and looked mostly to men to deliver: Kandinsky, Munch, Matisse, Picasso, Dali, Malevich, Pollack. These guys wrote exciting new manifestos to advertise their art. At this time art became big business on a scale never seen before. People began buying art as a financial investment, not simply for the love of it, and the safest bets were the leaders among artists – the men.

How Bad is Discrimination Against All Artists?
So, sexism played a part. But, it’s worth noting, the social institutions that propelled modern artists to such fame (the galleries, schools, and museums) also left many male artists in the dark as well. Many 19th century masters have been neglected in museums, their work gathering dust in storage.
And, with new forms of electronic entertainment in film, radio, and television, we’ve created whole new classes of artists to celebrate: the film star and rock star, the director, the DJ, the news anchor, the comedian, the rapper, the pop novelist. These people come on talk shows and social media platforms, and fans follow them by the millions. It’s been hard for our visual artists to keep up. It’s a pity, and I think it stems from people loving to see the creative process in action during a performance. But, visual artists perform in private, showing only their final products, which are just as vital as the other arts… and yet taken for granted.
There are so many examples. We’ve all seen Shrek, but who knows the name of the man who created him? Or the guy who designed Wall-E? Or who drew Super Mario and Zelda? Or what about the building you live in? Or the clothes you’re wearing? Or the car you’re driving? These were all designed by people (teams of them), and yet we don’t celebrate them at all… There’s no plaque on your home, no credits given in car catalogs. If you’re watching a film they’re in the end credits, but you’ll have to read quickly, those names go by fast! None of these people ever get invited on Colbert or Conan O'Brian. They’re not on Joe Rogan’s podcast. Mostly, they work for large, gray corporations who treat them as disposable factory workers – artists who don’t own what they create and have few rights (just ask Nathan Fowkes). It’s a shame because these are intelligent people who observe and comment on society in their work, and have nothing to do but think all day while they sit at their easels and paint. They could be fascinating people to listen to, if only we would.
Add to this, there are now so many artists to look at, it’s become a burden. No one talks about it as such, but the 19th century was its own kind of renaissance. New, cheaper art materials, cheaper means of transportation, and a new growing middle class with disposable income led to an explosion of new art and styles. 20th century modernism was likewise a new renaissance, and now post modernism as well. There’s so much to look at, you can look your whole life and not see it all.
Art history books simplify this by discussing only the most important leaders (men), skipping thousands of other artists, male and female, considered followers. It’s an attempt to create an orderly narrative from chaos, and it’s unfortunate because many of these lesser-known artists were just as talented, if not more so, than the big names. And, then people accept this distortion because it’d take a lot of work to reexamine.

So, Back to My Lesson
I figured the simplest way to show the current state of this discrimination would be to go on Google. First, I searched "greatest artists of all time". 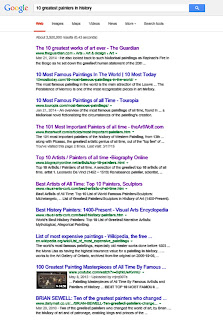 I found several Top Ten Lists (none of the artists were women), and a Top101 List. It included two women artists: Frida Kahlo and Georgia O'Keeffe (and they misspelled her name!). I then searched "greatest painters of all time" and got the same results. Another list came up from Rolling Stone Magazine, the 100 GreatestArtists of pop music. You’d think there would be more women here, and there were – seven. Out of a hundred! And, they listed Eric Clapton and John Lennon twice (solo and in a band)!
Then I searched "greatest women artists"... and I didn’t get a single list anywhere. 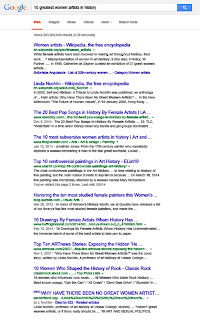 There was a list of Top Ten Under-Appreciated Women Artists (now gone), and a list of Top Ten Most Subversive Women Artists. There were several lists of women artists in alphabetical order, including silversmiths and other craftsmen, but no list of greatest artists. Then, just to prove a point, I searched "greatest super models" and found Google had already made its own list! You can still find it, you’ll get an endless gallery of headshots to scroll through. 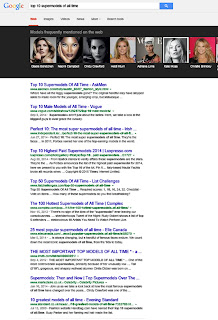 That was in 2015. Since then, the biggest event on this topic has been Katy Hessel's new website, https://www.thegreatwomenartists.com/ started in 2019. She doesn't have a 100 list, but she does have a top 26 (A-Z) list... but it's not a good one. It's a celebration of the women's art movement, which is great, but several people on her list aren't even artists. I mean, she lists art historians and collectors over actual artists, and the letters 'M' and 'T' are for museums! Those aren't artists! What's even worse, the museum she mentions, MoMA, has only about 5% women artists in its collection! Perhaps it's improved since last I looked, but it's not exactly a bastion of feminism. But, worst of all, Hessel bases her choices on personal favorites, often in total disregard to the quality of the work. It almost feels like she made a quick pass at a few London galleries with a notepad and jotted names to fill the gaps. It's all debatable, but when you make a list, you're not simply looking for great, but the greatest. There's a difference, and it requires casting a much wider net - as well as giving a solid basis for how you evaluate the work.
There has also been a list made by ranker.com of the “greatest women painters” but it relies on other online users to vote, turning it into a heavily skewed popularity contest. It’s the laziest, most thoughtless way to make a list. In 2016 Bazaar Magazine published a top 10 list for women artists, but it’s heavily skewed towards post modern conceptualism – I just can’t concur. MoMA produced this Top 10 list in 2019. Then, there's a new book, released in 2019 by Phaidon. It shares the same goal as this blog, only the list is different, and you have to buy it. I want this list available online for free.
So, it's getting better year by year, but my main point is this – that for whatever reason, our society doesn’t seem all that interested in women being artists (i.e. what they have to say). Many women can and do make art, but, up to now, they’ve been ignored. What society wants from women is primarily beautiful models to obsess over; they should be seen and not heard. That's the sentiment one seems to get (or at least used to until very recently) from a simple Google search.

Who Cares?
You may be thinking, it’s just a couple stupid lists on the internet! They don’t matter, no one really puts that much thought into them, and art isn’t a competition anyway! It doesn’t matter if one artist is better than the other, all that matters is if you enjoy the work or not. It’s like dessert, if it tastes good, eat it and move on. That’s true, in terms of enjoyment. You don’t have to show an artwork to millions to enjoy it yourself.
But that’s not the point of a list – it’s about recognition, earned from the lifetime of work these artists put in. And that’s why quality matters. Sure, you can make a website like athenaeum.org or a Facebook page like ‘Female Artists in History’, and create a nice long list with thousands of artists, complete with biographies and samples of their work. That’s a great resource, and I encourage it. But, who has the time to view it all? Most people don’t want to compare all 4000 artists and decide whom they like most. But, they will look at a Top 10 list. Maybe even a Top 100? That’s less of a project. People will look at it, talk about it, and if it gets enough attention, maybe a few critics will get involved, and then maybe? It’ll catch enough of the public’s eye to give these artists the attention they’ve deserved so long, out of the darkness and into the lime light - and eventually... into the history books.