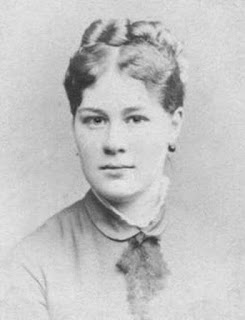 "When I attempt anything, I have a passionate determination to overcome every obstacle…And I do my own work with a refusal to accept defeat that might almost be called painful."

Cecilia Beaux was an award-winning painter of exquisite portraits, trained in France, combining, like Sargent, Zorn, and Sorolla the accuracy and technique of academic painting with the color palette, design sense, and (at times) the brushwork of the Impressionists. Cecilia won four Mary Smith Prizes, a 1st Prize from the Carnegie Inst., a Dodge Prize from the NY Nat. Academy of Design, the Logan Medal from the Art Inst. of Chicago, a Temple Gold Medal from the Penn. Academy of Fine Arts (PAFA), and another gold medal at the Exposition Universelle in Paris (1900). She was a member of the Nat. Academy of Design and the Nat. Inst. of Arts & Letters, which awarded her a lifetime achievement medal the year of her death. She was commissioned by the Uffizi Gallery to paint a self-portrait. And, she was invited to the White House to sketch Pres. Teddy Roosevelt and to paint the First Lady Edith Roosevelt's portrait. William Merritt Chase said of her (Carter, 2005), "Miss Beaux is not only the greatest living woman painter, but the best that has ever lived. Miss Beaux has done away entirely with sex in art." The Portrait Society of America has named a Forum in her honor, for the promotion of women artists. 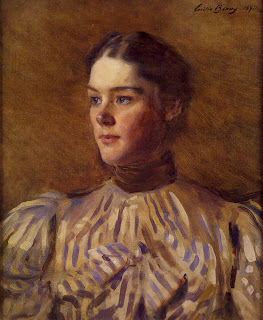 Cecilia was born in Philadelphia, PA. Her mother died from an infection just twelve days after her birth, and her father, a French silk manufacturer was so distraught he left his family for two years, returning to France. He left Cecilia and her sister Etta in the care of their aunts and grandmother (shown below): 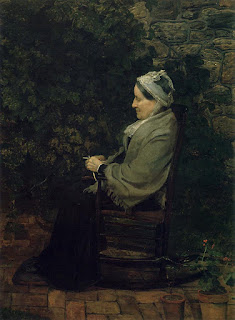 Jean Adolphe Beaux returned to Philly when Cecilia was two, and lived with her and Etta for four years, until his business failed during the Civil War, and he abandoned them again. Cecilia later remarked, "We didn't love Papa very much, he was so foreign. We thought him peculiar." Luckily, one of her aunts married a mining engineer, William 'Willie' Biddle, who was, for fifty years, Cecilia's greatest supporter, both financially and otherwise. Willie was musical, teaching Cecilia how to sing and play piano. He also took her to the PAFA, the first and oldest art academy in America, introducing her to the world of art. 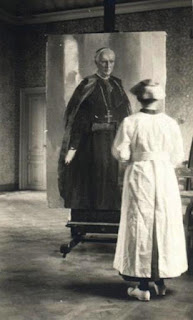 Cecilia working on her portrait of Cardinal Mercier, ca. 1919

At age sixteen, Cecilia began art lessons with Catherine Drinker and Francis Adolf Van der Wielen (at his school). In just two years Cecilia switched from student to teacher, taking Drinker's post as Drinker began studying with Thomas Eakins at PAFA. Cecilia then studied printmaking, doing some work as a scientific illustrator of fossils for the US Geological Survey. Cecilia also studied at the PAFA, under Eakins and Schussele, although she steered clear of the controversy that led to Eakins being fired. 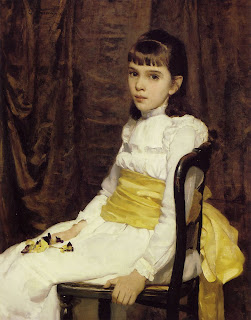 'Portrait of a Little Girl'


At 24 she left the academy, trying her hand at porcelain painting, and soon regretting it. She then studied with the artist William Sartain (who also taught her the false science of phrenology), and later got a group of women artists to hire their own nude models, without an instructor. In 1884 Cecilia started her professional career, painting 50 portraits in just 3 years, selling them at $500 each (comparable to Eakins) and winning juried exhibitions. Her friend, the artist Margaret Bush-Brown took one of her works to the Paris Salon, where it was accepted, somewhere between 1885-6. 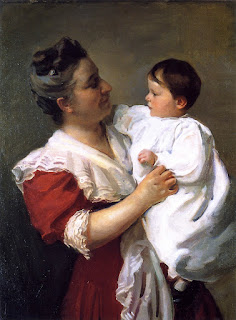 She had made it in Philly, but still felt certain she needed more training, so in 1887, at age 32 Cecilia moved to Paris, studying at the Académie Julian (the same school as Anna Bilinska-Bohdanowicz and Marie Bashkirtseff, then deceased). She also took classes at the Académie Colarossi, where she received weekly critiques by Robert-Fleury and Bouguereau. Cecilia wrote (Carter, 2005), "Fleury is much less benign than Bouguereau and don't temper his severities…he hinted of possibilities before me and as he rose said the nicest thing of all, 'We will do all we can to help you'…I want these men…to know me and recognize that I can do something." Cecilia studied there for two years before returning to Philly. 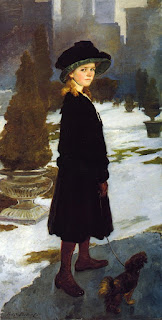 While in Paris, Cecilia's aunt warned her to resist the temptations of Paris, saying, "Remember you are first of all a Christian – then a woman and last of all an Artist." Cecilia also resisted the new style of the Impressionists, dabbling in plein-air landscapes before returning to the comfort of her studio. 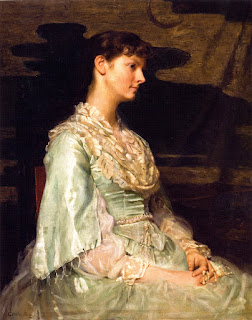 'Portrait of Ethel Page as Undine'

In Philadelphia, Cecilia continued painting portraits of wealthy socialites, finishing over 40 in the next five years. She never married, devoting her life completely to her art. In 1897 she joined the Plastic Club - a group made exclusively for women artists, in answer to the Philly Sketch Club which was for men only (started in 1860). The Plastic club offered lessons, exhibitions, and a yearly masquerade ball called 'The Rabbit'. The club still exists today, and now it also admits men. 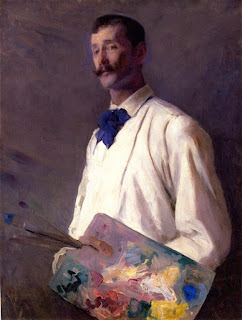 By 1900, all of Cecilia's aunts had passed away, and Philly no longer held the charm she once had. With so many commissions coming from out of state, she decided it was time to move to NYC. She began wintering there and summering in the fishing town of Gloucester, Massachusetts. She built a house and studio there. She continued to paint a great deal, working tirelessly each day, until a fractured hip ruined her health on a trip to Paris in 1924. Throughout her life she never changed styles, resisting the calls for modernity, in movements such as the NY Ashcan school, and all the 'isms' presented at the 1913 Armory Show - an exhibit of European works in NYC showcasing Fauvism, Cubism, Dadaism, Expressionism, and so on. It completely revolutionized the course and definition of art, and not to Cecilia's liking. 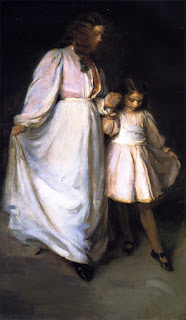 Cecilia passed away during a dark period in American history, with WWII in full swing and the outcome still unclear. It must have been a difficult time. But, Cecilia's life was always full of difficulties, and she always persevered. In that way she's a model to us all. 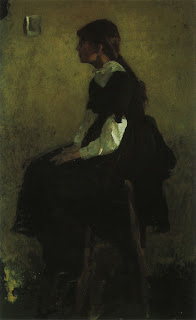 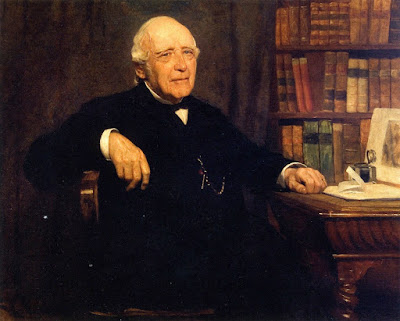 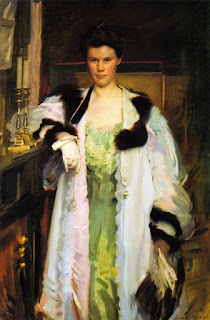 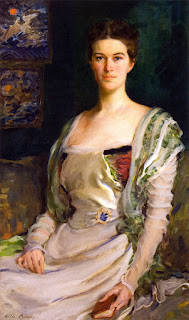 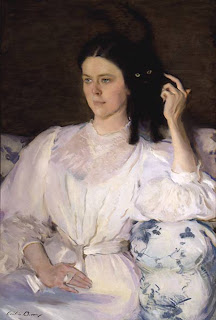 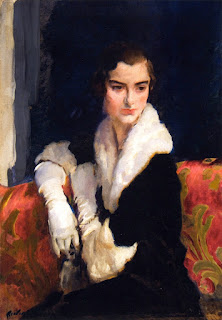 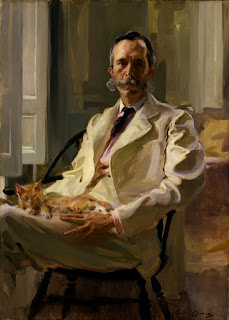 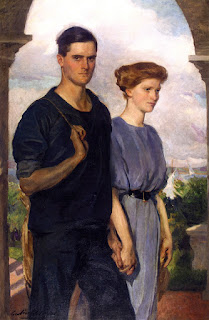 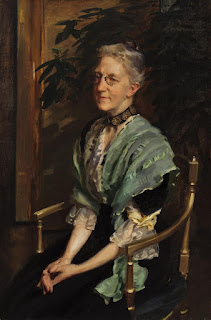 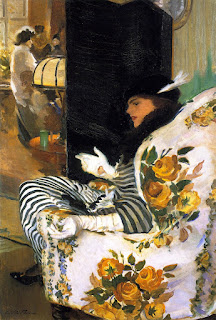 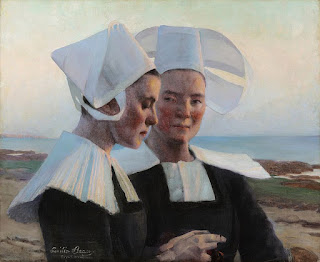 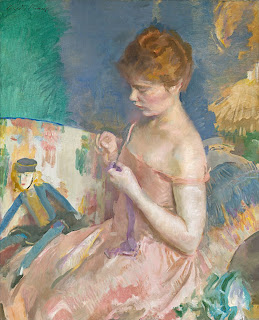