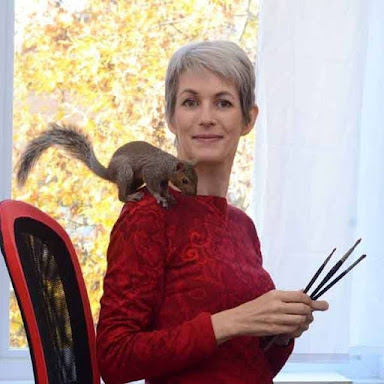 Marina Dieul is an incredible trompe-l’oeil painter from Montreal, Canada. She has exhibited world wide. She's won the Kingston Prize, best in show at the Art Renwal Center (ARC) Bouguereau competition, the Butler Institute and the Boldbrush competition, first place for drawing at the ARC (which has selected her as a living master), first place from the Artist Magazine, 2nd place from International Artist Magazine, and many other awards. She has been a member of the Portrait Society of Canada, the Portrait Society of America, the Cecilia Beaux Forum, the International Guild of Realism and the Mondial Art Academia. 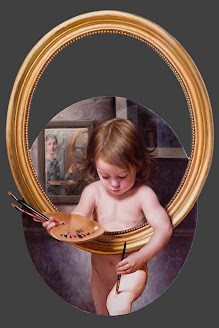 'L'artiste et son oeuvre'
Marina was born in France. She showed a talent for drawing at an early age. She says in this interview with Laura Gomez (Klassik Magazine, 2018):
"I don’t remember a time where I haven’t been in art. I probably spent much more time during my childhood creating things than playing with other kids. It eventually happened that I became a professional artist… Actually I never envisioned a different possibility to make a living."
Marina also talks a bit about growing up in France:
"One dear memory among hundreds of others is my morning commute when I was going to school by boat in Bretagne ( France’s west coast) I remember those quiet times, watching the sun rising on the sea, taking mental notes of those floating colors to reproduce them later with my little watercolor set." 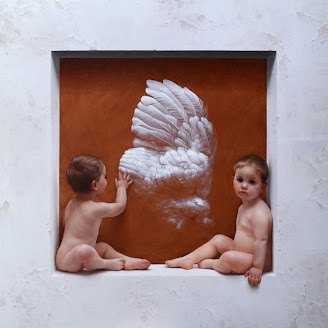 'La grande aile'
She studied at the École des Beaux-Arts in Paris. She says (Gomez, 2018):
"I studied at l’Ecole des Beaux-Arts in France, unfortunately, they were focusing on conceptualism, and I quickly understood this wasn’t something for me. At this time, it was almost impossible to find a school focusing on realism in France so I taught myself, year after year, by copying old masters. Eventually in 2008 and 2010, I studied at Studio Escalier in France with Tim Stotz and Michelle Tully, two former students of realist painter Ted Seth Jacobs. That’s the best investment I ever did!"
In 2000 she and her family moved to Montreal, Canada, where she lives today. 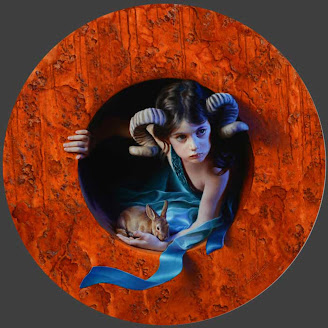 Marina talks about her art in this press release upon winning the Kingston Prize:

"My goal is not only to paint a recognizable person, at a moment of her life, with her history, her psychological complexity, but also to paint this person as a human being in which everybody can recognize himself or herself. I tend to go beyond the simple representation to reach an allegory of humanity, using sometimes symbols to achieve this goal.

"Recently, a predominant presence of babies and toddlers appeared. They are often forgotten in contemporary realism although they were very present in the paintings of the past centuries. I think they are fascinating human beings, who live fully strong emotions, and express them with a rich body language. In my latest works the union of my different interests (Trompe-l’oeil and Figure) occurred, opening a new door." 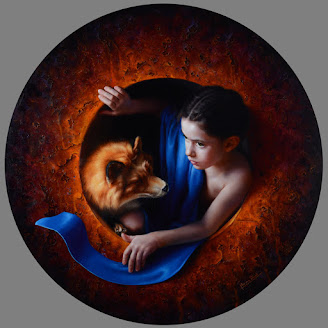 Marina says of her cat & mouse portraits (Gomez, 2018):
"For my animal and human portraits, I use a mix of live models, photography, sketches, built models, imagination and memory. My little mice series was born after a mouse invasion. I quickly envisioned a BIG series of 10 paintings! (That sounded like a lot at the time) I’m going to celebrate number 300 soon, and I’m proud to say that, except for a few recent ones, they all found a home from Hong Kong to New York, from Italy to New Zealand: my mice’s world invasion is falling into place.
"Recently more cats appeared in my work; we became a foster family for a non-kill local shelter, and this is sometimes a bitter-sweet experience (much more sweet than bitter though).I feel the need to portray some of our little rescued cats to celebrate some beautiful encounters." 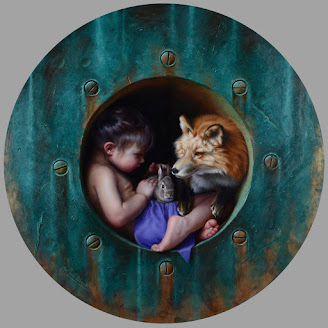 Marina says she finds inspiration everywhere (Gomez, 2018):
"I must slow down my creativity because I have too many projects. That’s also a reason why I like painting series: the next painting is inspired by the previous one. It’s interesting to push a concept much further than I first thought. I have always enjoyed the company of animals, and I discovered that I like to paint mostly organic forms (forms you can find in the natural world in opposition to the forms manufactured by humans). That said, I find that painting still lifes or trompe-l’oeil with objects taken from nature is very boring in comparison with all the storytelling, the poetry and the humor you can include in a composition with living creatures." 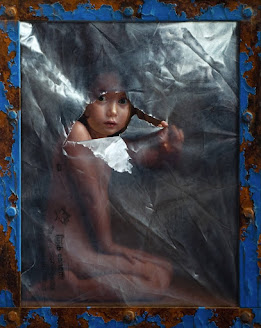 Marina's artistic inspirations are (Gomez, 2018):
"I’ve been influenced by too many artists to name them: as a child, teenager, and young adult I spent countless hours visiting museums mostly in France and Italy. ( Not only in Paris, Rome and Florence, but every medium to small town seem to have some great smaller art museums as well) I’d say the 2 main art periods that influenced me strongly are the Italian Renaissance, and the Dutch- Flemmish 16th – 17th century… I discovered the Trompe-l’oeil genre in my early 20ies, and got my first trompe-l’oeil commission at this time. The love of trompe-l’oeil never left me."
Marinadieul.com
Facebook Page
Instagram Account
Twitter Page 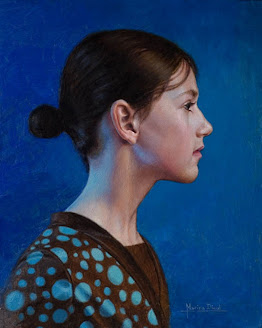 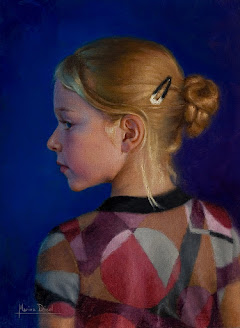 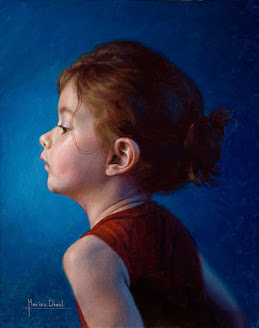 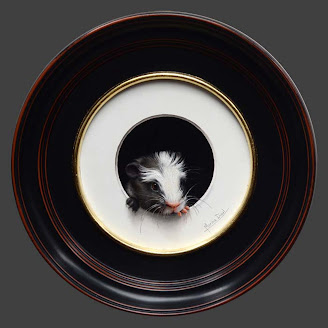 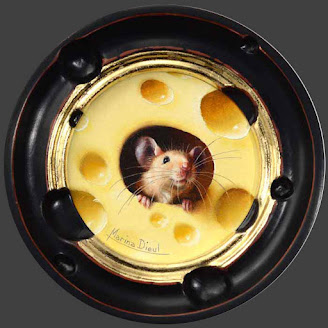 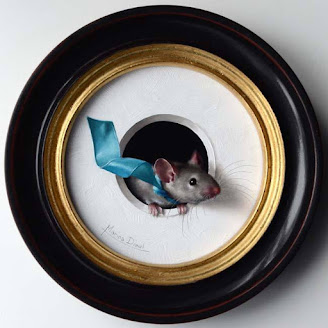 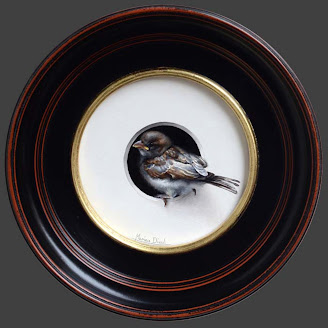 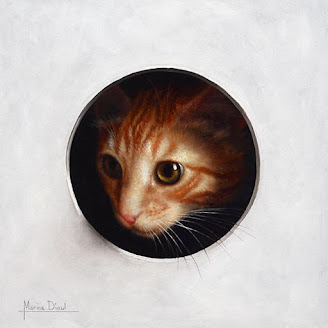 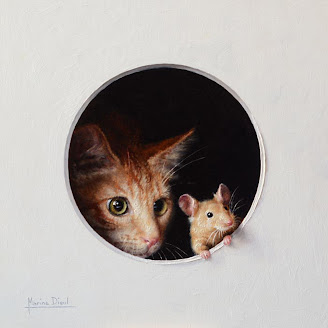 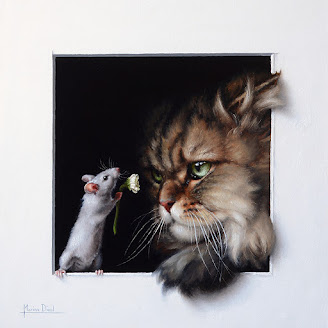 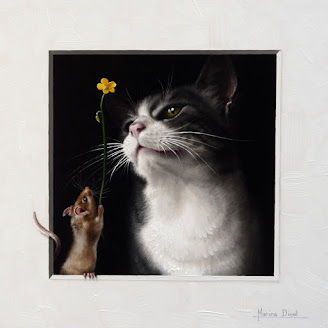 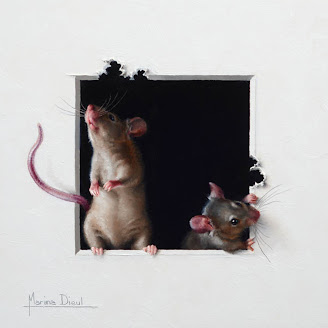 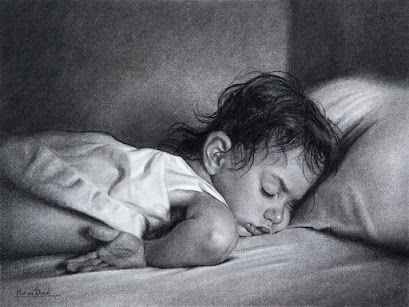