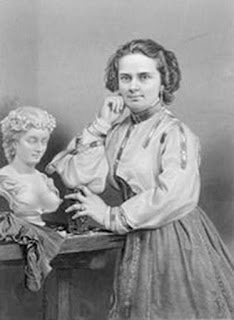 Harriet Hosmer, an American, was the first professional woman sculptor in history, and one of the most famous of the 19th century, carving marble in a Neoclassical style. Originally from Watertown, Massachusetts, she spent much of her career in her studio in Rome, Italy, where she lived with a large and flamboyant expatriate community, including Nathaniel Hawthorne, Robert Browning, William Thackeray, Edmonia Lewis, and a large group of other women sculptors. Hawthorne wrote of her, "She was very peculiar, but she seemed to be her actual self, and nothing affected or made up; so that, for my part, I gave her full leave to wear what may suit her best, and to behave as her inner woman prompts." 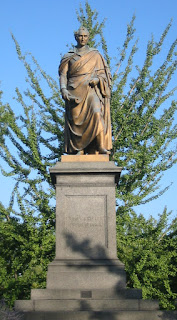 In 1862, she sculpted the first public monument in the state of Missouri (shown above). Her hometown of Watertown named an elementary school after her. And, during World War II, the US Army named a cargo ship after her, the USS Harriet Hosmer. 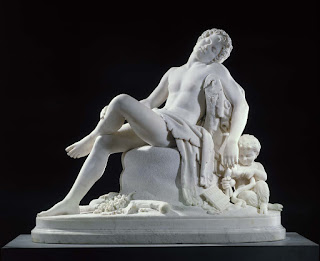 Harriet's childhood was marked by tragedies. Her mother and three of her siblings all died during her childhood, despite (or perhaps because of?) her father being a doctor (19th century medicine was not ideal). But, Harriet survived, in part because her father encouraged her to train physically in rowing, skating, and riding horses. Harriet was adventurous, once travelling alone to live with Dakota Indians. Around 1850-52 she won a foot race up a hill near Lansing, Iowa - the hill was named Mount Hosmer in her honor. She also shared her father's love of medicine, studying anatomy with Dr. Joseph McDowell in Missouri. She then moved to Boston, where she lived until 1852, earning money as an artist's model. 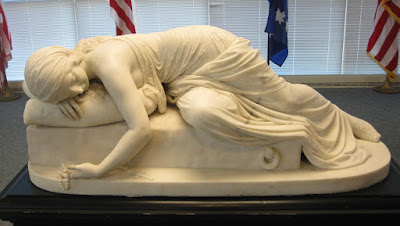 In 1853 Harriet traveled to Rome, where she became a student to the sculptor John Gibson, and was finally able to study from live models. It was here that Harriet began a quite successful career, sculpting portraits and figures from mythology. She also fell in love with the patron, Louisa Baring, Lady Ashburton. The two lived together for twenty-five years. Harriet remarked when she first saw Louisa that she looked like a Greek goddess, saying, "There was the same square-cut and grandiose features, whose classic beauty was humanized by a pair of keen dark eyes."

One of Harriet's first works in Rome was of the clasped hands of the famous poets, Robert and Elizabeth Barrett Browning. Many years later, Harriet wrote her own poem, referring to her sculpture, "Parted by death we say... Yet hand in hand they hold their eternal way." 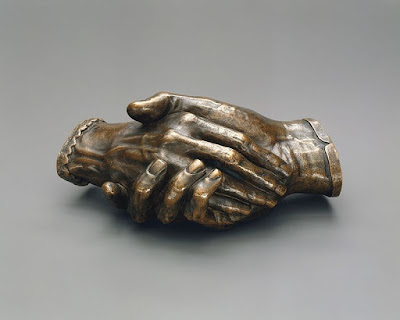 Like Edmonia Lewis, Harriet preferred to carve her sculptures herself, not hiring craftsmen to carve her designs in marble for her - she didn't want anyone claiming credit for her art. One famous sculpture of hers was the portrait of Beatrice Cenci (shown above). Beatrice was a young Roman noblewoman who lived during the renaissance. She killed her abusive father, and was convicted of murder and beheaded in 1599. In death Beatrice became a symbol of resistance against Roman aristocracy, and legend says her ghost returns every year to the bridge where she was executed, carrying her severed head.

Later in life, Harriet moved to Chicago, exhibiting her 'Queen Isabella' at the 1893 World's Fair there: 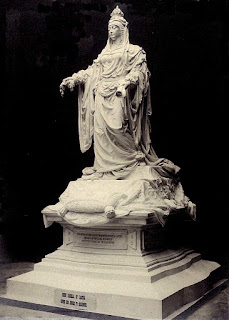 She then moved to Terre Haute, Indiana, finally returning to Watertown, MA, where she died in 1908. 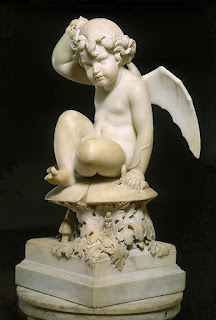 'Puck on a Toadstool' 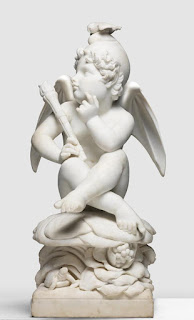 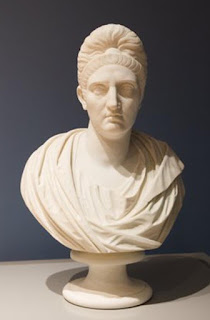 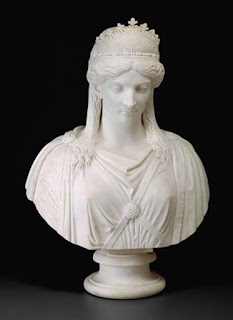 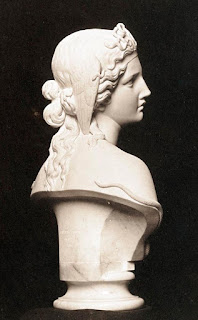 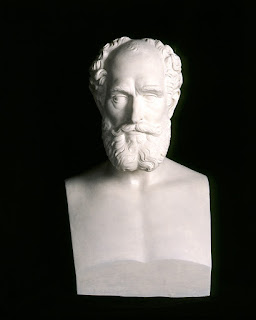