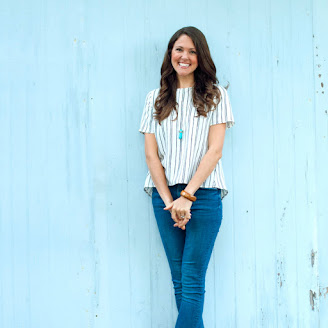 "Any time I start a painting for reasons other than I'm just inspired to do it, I just cannot finish it."
Amy Lind is a wonderful painter from Savannah, Georgia. She is a member of the Portrait Society of America. She has been featured in American Art Collector and Southwest Art Magazine, which named her their "Editor’s Choice for Up-and-Coming Talent". Oxford American named her one of "100 Under 100 New Superstars of Southern Art". She's been a finalist twice at the Art Renewal Center's competitions. She also illustrated the children's book Marcel the Shell With Shoes On: Things About Me, which was a NY Times best seller. 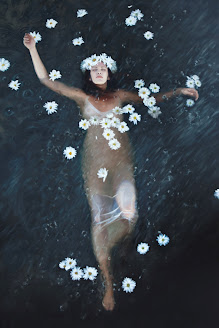 'Anew'
Amy grew up in Chicago. According to this article by Bevin Jalbert (Paprika Southern, 2016), she began drawing portraits as a child, even during sleepovers. She got her BFA at the Savannah College of Art & Design (graduating summa cum laude). She then studied with Maureen Hyde at the Florence Academy of Art and with Michael Grimaldi at the Bay Area Classical Artist Atelier. Living in Savannah made quite an impression on Amy, so she decided to stay there after graduating. She says in this interview with Bonnie Gangelhoff (Southwest Art, 2012):
"I’m currently working on paintings that depict the figure in various rooms of an abandoned farmhouse. Savannah has a rich history and boasts one of the largest historical districts in the country. I’m fascinated by the juxtaposition of pristine old mansions next to dilapidated houses—a common site on the outskirts of town. The farmhouse that inspires my current paintings contains so much beauty in its state of deterioration. I much prefer the nostalgia of a place where many have lived, loved, and lost to a brand-new place." 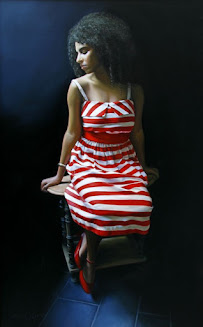 'The Lines Between'
Amy loves painting people, as she explains (Gangelhoff, 2012), "The figure is by far my favorite thing to paint. There is a natural harmony created by the human form as it moves, allowing for unlimited interesting shapes. But pleasing compositions aside, people are captivating. They hold so much emotion and personality within their eyes alone, not to mention the rest of their features."
She prefers painting portraits of women, saying in this interview with Jeffrey Carlson (Fine Art Connoisseur, 2014), "The female form is intrinsically beautiful and naturally exudes grace. It possesses subtleties of soft edges, smooth skin, and flowing hair that are rewarding to paint."
According to Jalbert, Amy often paints friends, but also hires someone to do hair and makeup, and she often finds clothing, costumes for her models, sometimes even hiring a florist. She then takes a photo shoot to get the right image. 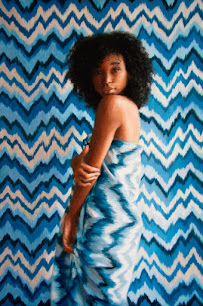 '
In 2014, Lind exhibited a series of paintings in a show titled Flora. Amy said of the work (Carlson, 2014):
"There are overarching themes of life, beauty, and hope throughout this entire body of work, and the flowers in many of the paintings contain specific symbolism. For example, ‘Anew’ depicts a sea of daisies, which open during the day and close at night. These daisies, along with the element of water, represent rebirth and renewal. ‘Bloom’ portrays an innocent young woman wearing a headdress of peonies, which symbolize bashfulness, romance, and prosperity. When moved, peonies take a few years to establish themselves, but then go on to bloom for decades thereafter. She is coming into her own and still finding her footing as a woman.”

“‘Bittersweet’ alludes to Flora, the goddess of flowers and one of the goddesses of fertility. The pomegranate that she holds symbolizes both the sweetness of fertility and the unknown bitterness of infertility. In ‘Came From’, the subject is confronting her past, as she wears a crown of dried leaves. The thistles in her crown represent pain and protection. Thistles also survive harsh conditions and grow where other plants won’t. This concept brings hope that she will survive the pain of her past.” 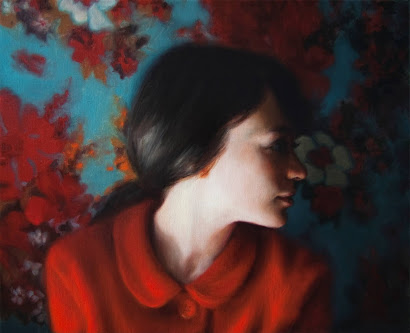 “I think figurative painters today are often dismissed as not being forward-thinking and simply piggybacking off the Old Masters who have already exhausted the subject. So to some degree I feel pressure to keep my figure paintings fresh and new. That being said, it is almost more of a challenge for me to continue painting the figure in whatever way I am inspired to – even if it’s not groundbreaking. Ultimately, I have to stay true to what excites me to paint, and I believe the same beauty and truth that inspired artists and pleased viewers in the past will stand the test of time.” 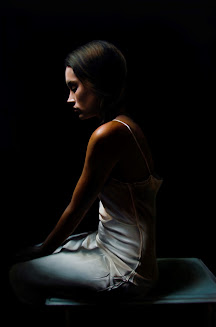 'Illuminated'
Amy talks about her studio (Gangelhoff, 2012):
"I lucked out when I found my studio—it was built specifically to be a painter’s studio, with tall ceilings and five north skylight windows. The main room is large enough that I can have several different areas within it. One wall houses a long set of bookshelves that holds art books, magazines, supplies, and potential still-life items. I have a small dining table with chairs for eating, stretching small canvases, or chatting with clients. I also have a nice seating area with a sofa and chair where I can sit with clients, pose models, read, or just take a moment to relax. Since I paint standing up, it’s nice to put my feet up every so often. I also have a long shelf above the sofa containing all the original paintings I did for the bestselling children’s book Marcel the Shell With Shoes On: Things About Me.
"For immediate inspiration, I have several framed prints by John Singer Sargent hanging beside a plaster cast of a Bernini sculpture that I brought back from Italy. A selection of wardrobe items to be worn by models hangs on the wall for easy access but mostly because they’re beautiful to look at. I have three of my own paintings displayed in my studio as examples for when prospective clients come to visit. My husband and I collect artwork by friends and young artists, but we display that in our house."
Amylind.com
Facebook Page
Instagram Account
Blog 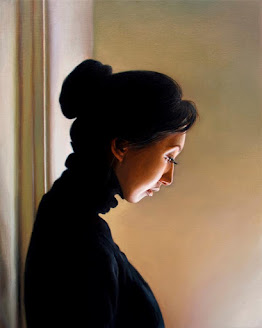 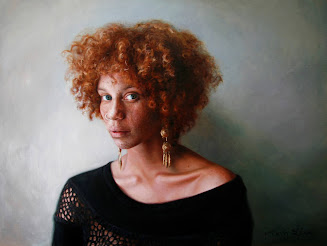 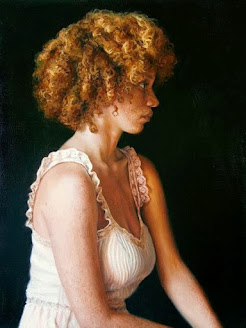 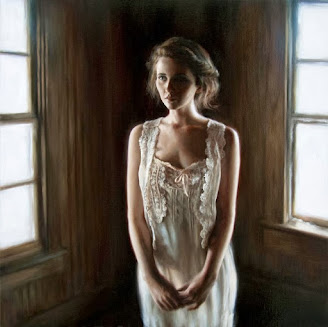 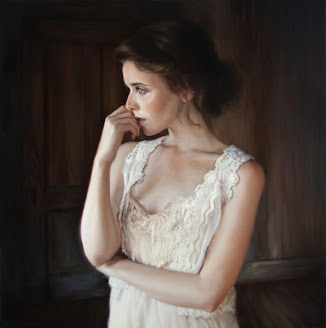 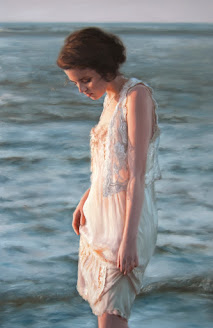 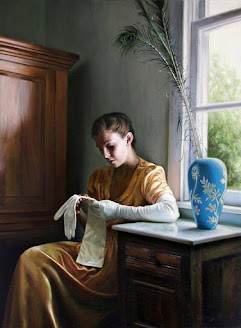 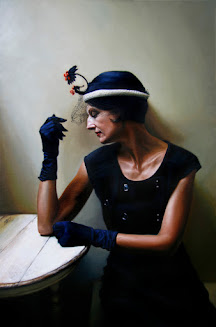 'The Little Lady with the Big Nose' 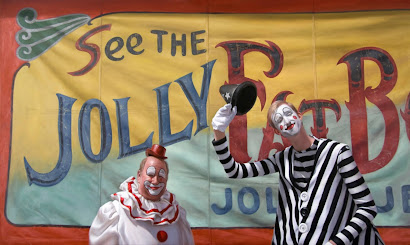 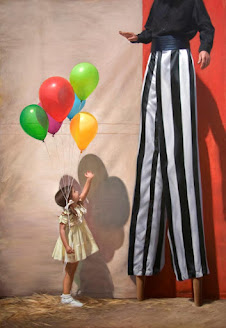 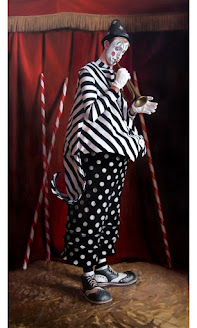 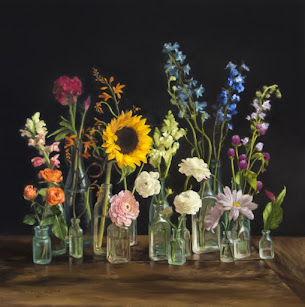