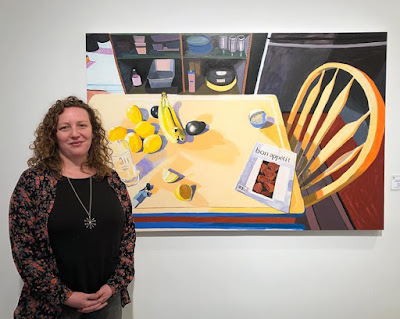 Chelsea with her painting, 'My Kitchen Table in the Morning', 2017
(Photo courtesy of Lyons Wier Gallery)

Chelsea is an excellent and innovative painter from her home studio in Gilbertsville, New York. She's one of the few painters to experiment with shaped canvases, and does so to greater effect than any other artist I've seen. She's also an excellent cellist, taught by her father, a music professor, starting at age one. He supported her artistically, taking her to cello practice in Manhattan on weekends, and he built her an art studio in her bedroom when she was twelve. At one point she planned to make cello her career. She spent a year and a half at the New England Conservatory, but confesses she hated it (Hess, 2018).

Her aunt and uncle were also painters. They gave her lessons, helping show her how to mix colors. She says on Erika Hess's podcast (2018), "My aunt and uncle just gave me one lesson I can remember. I think that that was it. They gave me burnt umber, ultramarine blue, and white, and they were like, 'Mix the gray scale from your darkest dark to your lightest light and I want you to have warm grays and cools grays.' And, I was, like, twelve. It was a total revelation to me and I dug it so much. I painted a still life for the first time ever, and I still have it in my parent's house. That simple exercise was so formative for me. I didn't even do art school, I was so satisfied with that exercise for so long."

While at the conservatory, she began modelling at Mass Art, just to soak up the atmosphere, and shifted towards painting in her dorm room instead of practicing. She quit school and got accepted to Rhode Island School of Design (RISD) where she got her BFA in 2006. She then earned her MFA from Boston U. in 2010. Since then, she's gotten married, has a daughter, and now paints full time at her home studio in Gilbertsville, NY. 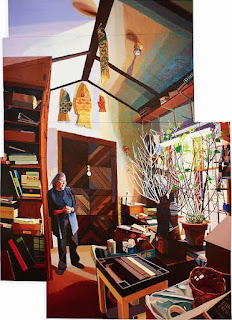 Her works are mainly portraits of people in their homes - or in her home. They explore the meaning and importance of one's home as an extension of the people living there.  While the canvases are filled with objects, personal affects and clutter, they all indicate something about the people who live among it, intimating who they are. Chelsea skews perspectives just as she warps and fragments her canvases (in a similar manner to how Malevich broke up the square). The effect gives the suggestion of cubism - of the necessity to see a place or thing from multiple viewpoints to truly know it, and it works. Looking at her triptych below, you do feel you know the space better, as your senses tell you, you're not just sitting in the space, but walking around in it. This feeling is enhanced by the large sizes of her works which suck you into the space. And all the distortion helps distinguish these compositions from ordinary, everyday photos. It tells you, wait, you need to inspect every little detail of what's happening here, because it matters more than you think. It adds weight and importance to what would otherwise be fairly ordinary (if eccentric) places.

The total effect of these works is surprising - portraits that are both grand and intimate, loud and yet incredibly quiet, busy yet still, peaceful but often still restless and isolating - poignant. Each room feels like a museum piece - a study in natural light - with the artist humbly in a corner. I ask you, have you ever seen anything like it? 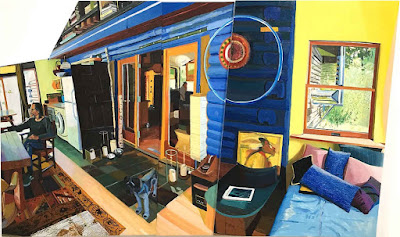 Chelsea Gibson has been so kind as to agree to an interview, so here is the transcript:

1. What inspired you to build your own shaped panels?

"One of my main goals in painting has been to show people what I see.  When I decided to start the shaped panels it was an effort to immerse people in my vantage point.  I would love nothing more than to be able to see the world through other people’s eyes for further understanding hopefully of what this world is like, but since that is impossible I have always wanted to show my viewers a bit of what it’s like from my point of view.  The shaped panels developed after taking many photographs of people’s homes, then printing and collaging them together to make a larger view than what my normal camera was capable of.  I was being honest and just stuck to the same exact format of the photographic collages.  If there was a shift in the perspective that created a strange seam or odd shape in the photo collage, I painted it that way." 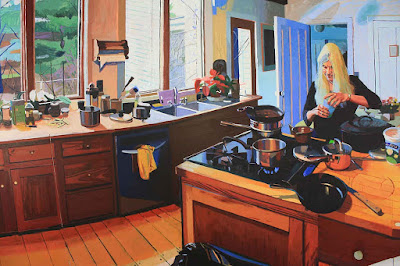 2. Besides family, who were some of your favorite art teachers and professors, and what did they teach you?

"I didn’t have art teachers as a kid because I took music class instead, as my elective.  I was happy learning from books and went to open nude drawing as a young person.  I taught myself how to paint for the most part.  During the summers of my junior and senior years of high school, I attended the New York Studio School Drawing Marathons with Graham Nickson.  Those were amazing times for me, and truly formative.  I will never forget him as a teacher or the building and the amazing classmates I had in those classes that really did deserve the term “marathon.”

"Once I started the summer transfer program at RISD (I transferred from New England Conservatory), I made a lifelong friend of one teacher in particular, Gwen Strahle, who was my drawing teacher.  She was a wonderful teacher and was extremely generous with her time with me.  My time at the NY Studio School helped inform a bit of a collaboration at RISD, where she is still teaching the winter-session Drawing Marathons, and I am extremely proud to have been a part of that program’s birth and first couple years getting started."

3. I see a bit of a Fauvism in your work, especially your most recent paintings, and I’m curious if it’s intentional, and if you see artists like Matisse and Derain as an inspiration?

"It’s funny you ask that, because I have never been a huge follower of the Fauvists, but I can see what you mean.  I think it’s kind of like intonation and tempo in music- to one person they think they are perfectly in tune, but to another person they are totally off.  Color can be like that as well.  I don’t intentionally exaggerate color, and I basically try in my own fast way, to mix exactly what I am seeing with paint.  However, I think that after years of doing it, I have slipped into almost a short-handed way of mixing color that might be “close enough” for me, and also somehow expresses more than just the object I am trying to paint- it somehow is also about me and how I am doing." 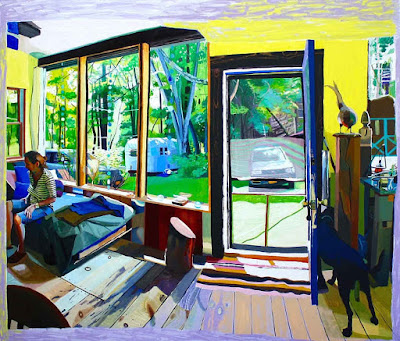 4. If time and money weren’t an issue, what would be your dream art project?

"To travel the country painting friends in their homes, and have child care everywhere I went so that I could actually work along the journey." 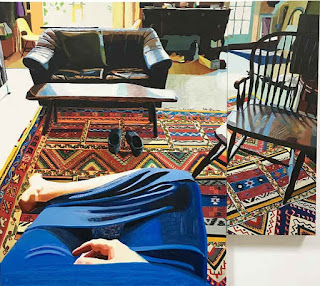 5. What advice do you have in terms of composition? What common problems do you see, and watch out for when you work?

"I had an issue with figure/ground or subject/background for the longest time!  Funny because that issue was definitely not there at the beginning of my learning process at the Drawing Marathons- because everything in the drawing had equal importance and every square inch of the drawing was worked on equally.  But the problem began later in college, when I thought I had to make “smart” paintings.  Long story short, I think I finally figured out that all I had to do was paint what I see and quit worrying so much about composition or what kind of statement I wanted to make, and just paint my world.  In most of my work we are talking about here, I set myself up to have no control over the composition anyway.  I was painting other people in their spaces, surrounded by a whole lot of stuff usually… and although I made lots of choices about how to create the collages and build the panels, and how much to include in them, I also took a lot of creative license away from myself and just painted everything in sight.  I guess that’s ok too."

6. What makes an artwork great, in your opinion?

"Such a hard question.  I find that great paintings show me something new almost every time I see them.  What I find really special is when that happens with a very “simple” painting that you wouldn’t expect that from- take Alice Neel’s portraits for example- although they are often “drawn” on white backgrounds, and they look pretty straight forward, her paintings are so rich with gestural and psychological honesty that I find that I can see something new every time I see them." 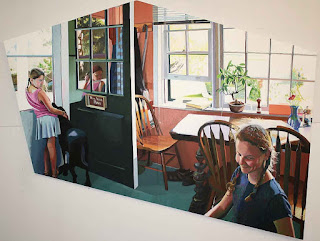 7.  What advice do you have for young art students?

"Make art that you want to make, not art that you think other people want to see.  It doesn’t have to follow any “rules” of what is “good”.  Also, practice a lot, and make a lot of bad art, and don’t worry about it, because out of a lot of practice comes (occasionally) a really exciting breakthrough." 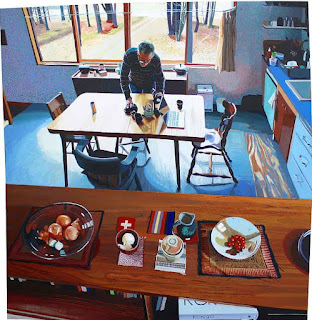 8. How do you think art education could improve, especially from K-12?

"To be valued as much as the sciences or language or writing.  It is so important that kids learn to see the world and react to it in creative ways because that creativity informs so much else in our lives as we grow up.  More art in education means a better world full of more empathetic, creative thinkers." 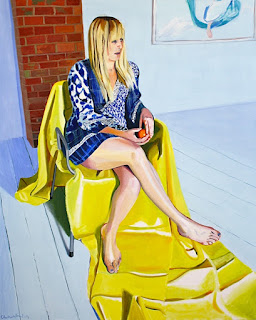 9. If you could own any one artwork, what would it be?

"A Lucien Freud painting with a nude and a dog.  Any one will do, thanks." 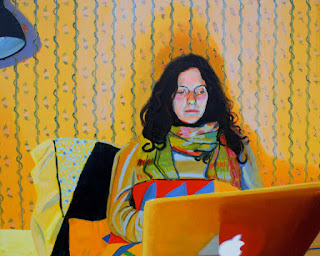 10. What do you tell someone who thinks art doesn’t matter?

"To say that something doesn’t matter is like saying that a person’s worth isn’t as much as your own.  It is insensitive and wrong.  Art can be scary for people who are unwilling to share themselves with other people.  People by nature are social and creative, and it is important that we nurture these parts of our humanity so that we are healthy and happy as a society." 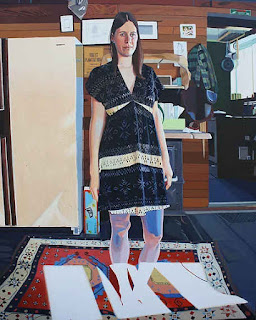 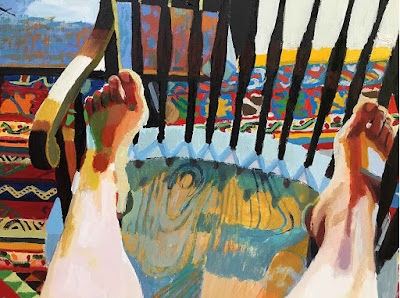