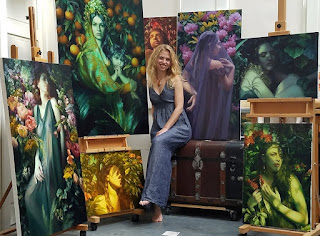 Adrienne Stein is an award-winning painter from Pennsylvania, whose work one might best define as Symbolist, although she likes the term 'Magical Realism' as well. Adrienne paints portraits of friends and family in fantastic settings, referencing folklore and, as she states on her website, 'personal and universal myth.' She fills these works with symbolic objects and imagery (I'll give examples below). Adrienne Stein earned her BFA (Magna Cum Laude) from the Laguna College of Art & Design, and her MFA from Boston University. She's been featured in Int. Artist's Magazine, American Art Collector, Realism Today and others, and has won awards from the Portrait Society of America, the Elizabeth Greenshields Foundation and the Art Renewal Center. 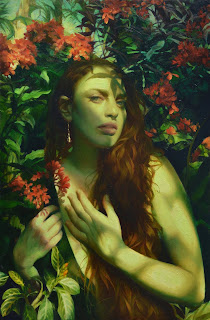 Adrienne paints in classical styles that she loves, particularly that of the 19th century Pre-Raphaelites and masters of the Dutch Golden Age. She says in this interview with Lucille Smithson (2016), "My great struggle is to honour the tradition from whence I came, but make it new and relevant, somehow to make it my own. My technique has not changed much, but I have adapted it for my subject matter. Also, my palette is wilder than most of my teachers!"
Adrienne continues later in the interview:

"I have spent much time trying to understand why my taste is so fantastical and antiquated. I have been told by reputable artists that I won't be taken seriously because of the sentimental beauty in my work. That is a fair assessment. I think always of my beloved Pre Raphaelite painters, pecking away in their studios in 19th century England, working on these detailed, magical, mythical paintings during the Industrial Revolution when living and working conditions were so bad. Cities were overcrowded and polluted. Handcrafted objects were being replaced by mass production. Our current world has different versions of the same problems. In a way, my work offers a similar antidote in the world. Hopefully they have one foot in this world, and one foot in a world that is hoped for. " 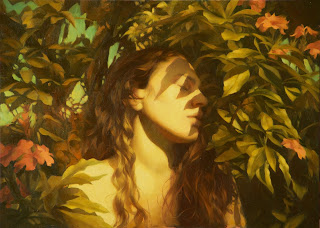 Adrienne developed her love of art at a young age, entering the atelier of Richard House at age 11 (she also had her first solo show that year, complete with a newspaper interview!). She explains (Smithson):

"I am the oldest of four children, and we are a supportive, tight-knit family. Everyone in my family is creatively talented in some way, especially my Mom. She had an interior design business and also does photography and painting. I grew up around beautiful objects and antiques that my mom collected, and also watching her select colours, textures, and materials for her clients and occasionally painting murals in their homes. Many props and textiles in my paintings come from her stash.,

"It feels like a miracle that I get to be a full-time artist today. I paint every day, which is truly all I ever wanted. I was a day-dreamy child and have been drawing and painting since I can remember. My parents recognised my art propensity and sought out a mentor before I was even a teenager (as I detailed above). They took me to visit successful artists' studios and to museum shows. I eventually went to art school at Laguna College of Art & Design, which was an amazing experience. In class, we talked about Rubens and Rembrandt like they were just as relevant and contemporary as any living artist. It solidified my devotion to figurative realism. Then I went to Boston to get my MFA from Boston University, which focused on oil painting, but more influenced by abstract expressionism. This helped me ask deeper questions of my work and to rethink my assumptions. Each step of my journey gave me something new and valuable." 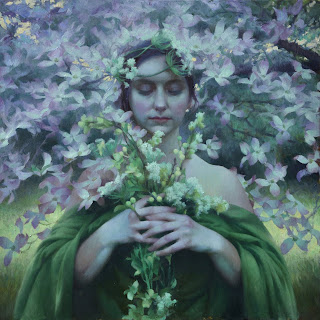 A good example of the symbolism Adrienne uses in her work is the still life 'Babel', referencing the ill-fated tower that men tried to build to get to heaven. In this Biblical tale (from Genesis), God cursed the builders with different languages so that they couldn't work together properly, abandoning the project. There's a quite famous painting of this fable by Pieter Bruegel the Elder. 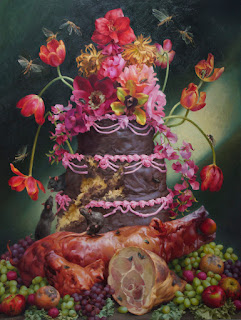 Stein's version uses a tiered chocolate cake, which she baked herself and set in her studio. In her interview with American Art Collector Magazine (2015), Stein explains how this painting symbolizes, 'a personal meditation on the passage of time . . . [It] is a vanitas theme, in which I am processing how it feels to be in my late 20s, and the naïve idealism of my youth is being slowly eroded. Even though the insects and vermin are devouring the ostentatious feast, it is still active, surprising, messy and beautiful-the way life is.'

Adrienne Stein lists her mentor, Richard House, and Bo Bartlett as two of her greatest influences. She also bases her palette in part from the Swedish painter Anders Zorn. In Smithson's interview, she asks Adrienne when she knows a work is finished. She replies,

"Rembrandt is alleged to have said to his student: "A painting is finished when I have accomplished what I originally sought to express." That is a nebulous statement, and often comes down to taste. I love both Sargent with his rapid, bravura brushwork, and also Holbein with his painstakingly articulated surfaces. I prefer more finished, rendered surfaces, so I usually stop on a painting when I feel that every square inch of it is finely articulated and the colours still feel pure and fresh." 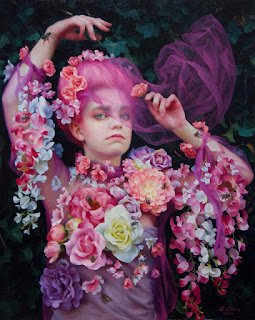 Adrienne reveals another secret about her work to Smithson - she usually writes poems to go with her works, often sonnets, but she never shares them! This goes to the question of an artist's motivation - is art something we do for others, or ourselves? 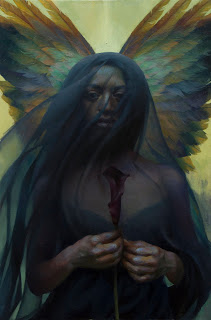 Another great quote from the Smithson interview:

"Someone once said "What you work on, works on you". I stand by that. Painting is a spiritual practice, and to me it is like prayer. When one seeks earnestly and diligently to craft something true, to reach for something transcendent, it transforms one from the inside. I try to make paintings that will better me by working on them." 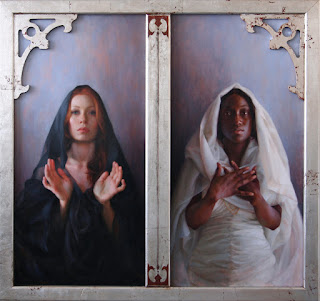 Sometimes the meaning of a painting can shift as she paints it. In the work below, we see a portrait of Adrienne's sister, holding her pet rabbit. The rabbit was killed by a cat shortly after beginning the work, so, 'The imagery in the painting evolved—its macabre raw meat and rotting fruit juxtaposed with the beautiful young woman, rabbit and flora creates a dichotomy between life and death, showing the full cycle and fragility of all that lives.' 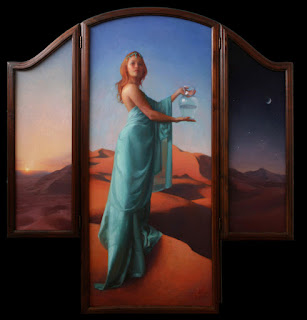 'Vision in the Sahara' 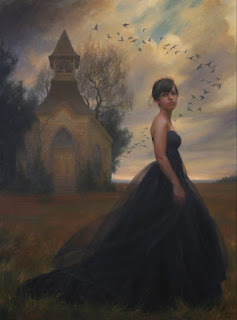 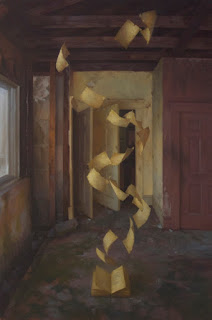 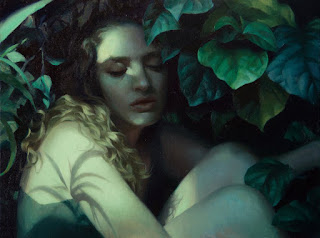 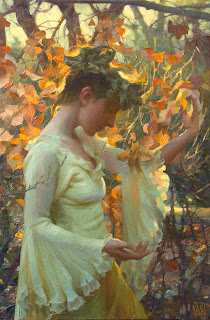 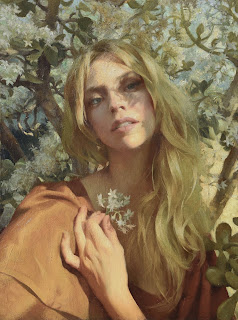 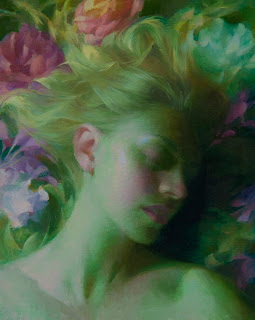 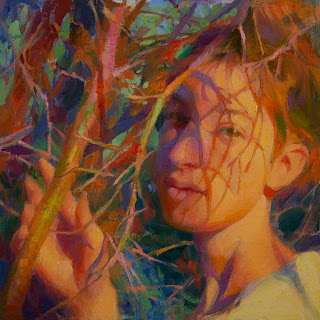 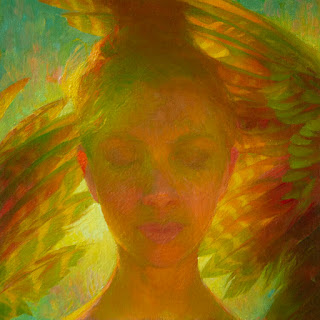 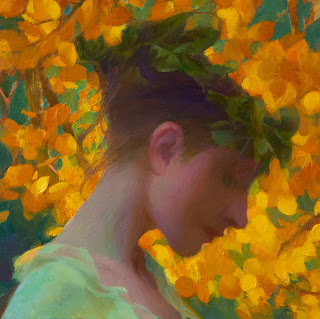 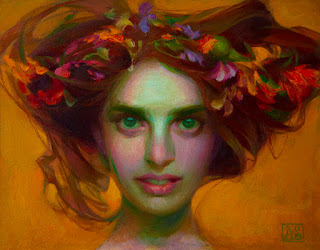 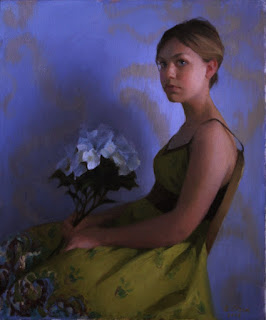 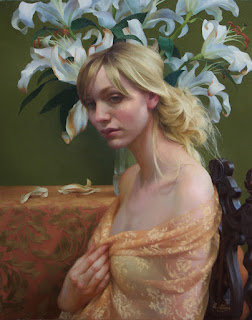 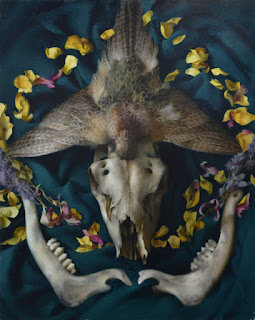 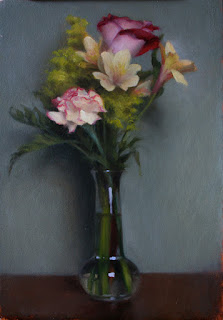 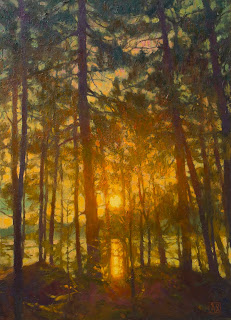