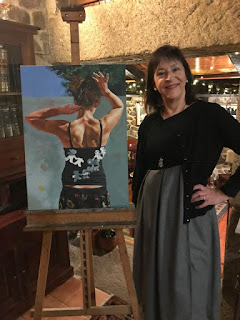 “A blank canvas is the stage. When I am poised before it, I feel that anything is possible. Nevertheless, painting is not always a joyous experience but rather, something I have to do to stay 'Alive' like breathing, eating and sleeping. . . . Continuous evolution is paramount for achieving success and, as a painter, if I ever stop feeling that evolution, I will put down my brushes.”

Teresa Brutcher is an extraordinary painter from Pontevedra, Spain. She paints realistic figures in impossible places, taking an element of the surreal to make visual puns, each with her signature sense of irony. Teresa has exhibited her work all over the world and America, and has been featured in Critica de Arte, El Punto de las Artes, and El Pais. 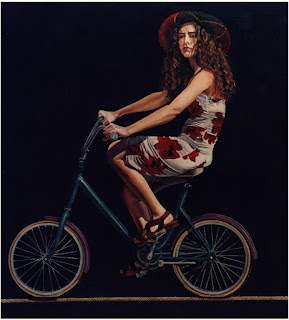 An ex-pat, Teresa was born in Phoenix Arizona, and lived most of her childhood on the island of Alameda, in San Francisco Bay. Having strict, but loving, parents, she was a studious child who loved animals, and wanted to become a veterinarian. But, by the time she entered high school, she knew she was an artist. In this interview with Art Moire (2019) she talks about her first artistic experiences,

"My older brother was a studio art major and when I was 5, he gave me brushes and oils for my birthday. I painted a snowman; it was quite atrocious. I also made a zoo with clay at the same age. For that creation, I won a first-place ribbon." 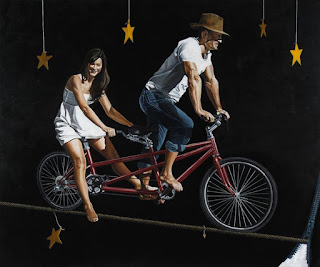 Teresa earned her BA from the U of California at Davis, spending her junior year abroad at Grupo 15 in Madrid, where she learned etching and lithography. After graduation, she returned to Madrid, to the San Fernando Art University, where she continued studying etching, and sold four editions (her first year) to a major department store, El Corte Ingles.

Teresa has stayed in Spain ever since, apart from a time in the 80's when she taught art at Yavapai College in Arizona. She makes her living as an artist. She is also married, and her favorite activity outside painting is to spend time with her family. 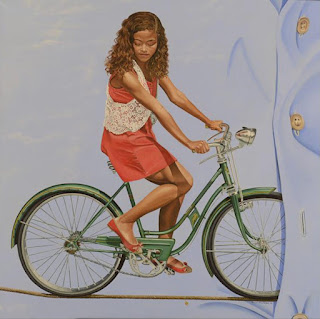 "I am a figurative realist. My style approaches photorealism but I am not interested in replicating a photograph. I relish in the rendering of defined muscles, bulging veins, strong light, and deep shadows exaggerating reality just slightly. At times my figures are players on a rather surreal stage as in my series 'Tightrope' where they struggle to stay aloft in an ethereal atmosphere.

"I endeavor to paint my figures inside and out. Skin and sentiment, the play of light and dark within and without, vexation and joy and all the complexities of the human spirit, surprise and inspire me to paint. I paint about my hopes and fears but never losing sight of the fact that they are not just mine. As humans, we share these sentiments and perhaps by manifesting mine, I can help someone else identify and understand their own." 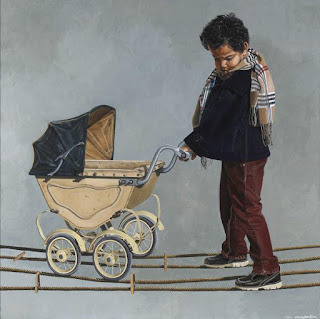 On the subject of art education, Teresa says this (Art Moire, 2019), "I really believe artists should attempt not to get caught up in the “shoulds” of the art world. As a fledgling artist I was overwhelmed by them. I think a creator must create from the soul what and how he or she wants to, liberating herself/himself of all external expectations. Of course, that alone does not guarantee the production of “true art” but it must be the point of departure." 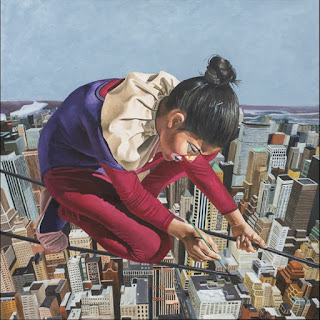 Apart from painting, Teresa enjoys reading, gardening, and boating. "I live in the beautiful Northwest of Spain in an area famous for its rias and Atlantic coastline. As I mentioned before, water has mesmerized me from the time I was a child. Going out on my boat is like going on a retreat. All my worries stay ashore." 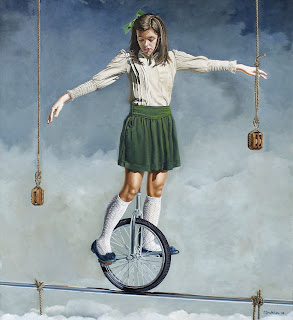 Teresa Brutcher has been kind and patient enough to agree to an interview for this blog! I'm very excited to show our conversation:


Why did you choose to live in Spain? How is life in Spain different from in the US?

"I came to Spain in my third year at University as part of a study abroad program organized between the University “Complutense” in Madrid and the University of California. Throughout that year, I travelled a great deal around Spain and other countries in Europe. I fell in love with Spain specifically and Europe in general. The history, the monuments, the churches, the museums, the traditions, all captivated me, a young girl from a country where the oldest standing buildings are generally no older than a century or two at most. But what really sealed my commitment to Spain was falling in love with a wonderful Spaniard to whom I have been married for more than 40 years.

"Living here is quite different than living in the US but the most fundamental difference is that people work to live rather than the contrary as in my country of origin. Enjoying a coffee with a friend or a glass of wine at a sidewalk café are everyday pleasures for which there is always time." 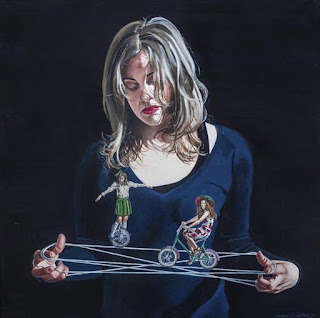 
Did you ever get to meet Salvador Dali and was he an inspiration in your work?  I noticed clocks figure into some of your paintings.

"No, I never had the opportunity to meet him. I don´t think he influenced me much, but I consider him to have been a master of magic and genius despite his detestable opinion of women´s lack of potential as artists." 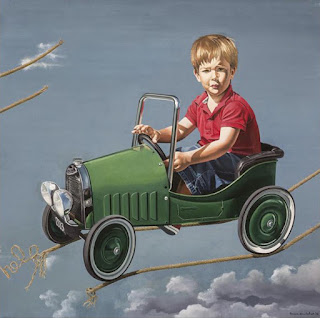 In your tightrope series, the tightrope appears to be a metaphor for life or the obstacles we face in life – the cords often stop short, with the hapless figures on top wondering, ‘Where do I go now?’ Have you ever felt like this in your life?

"Some of the protagonists in this series are aware of the looming menace below as they struggle to maintain equilibrium. Others seem oblivious to the danger or unafraid of it. So it is in our lives that many live in fear of taking that “wrong step” while others barge boldly ahead in their valor or ignorance. But brave and bold or timid and fearful, we are all faced with an undeniable reality: happiness is fragile and its nature, ephemeral. It can topple and shatter in a moment should we lose our footing on this “high wire” we tread called life."

"I have often felt that the fall is inevitable, that the tightrope has stopped short and that I don´t know where to go next but that is life; we must trust in ourselves and those we love to help us stay aloft. And when we do tumble, we must get up and try a different dance." 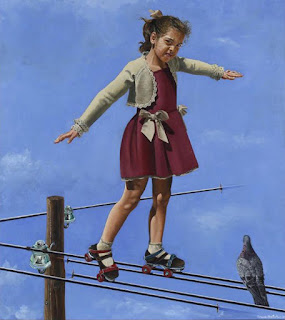 
You wrote that as a student you were ‘caught up in the ‘shoulds’ of the art world.’ Could you describe this in more detail? In what ways did you feel pushed or pressured as a student?

"I studied Fine Art at a time when figurative realism was almost a taboo. Although my teachers had received academic formation, most of them had totally rebelled against this sort of art education. We “should” follow the trends of pop and funk and abstract and put the past away. We should “like” art trends in vogue and emulate them.

"Galleries too were more likely to be interested in showing the work of artists who conformed to these new standards and very reluctant to welcome painters whose work was crafted with “old school” techniques.

"I refused to conform. Figurative realism was the language with which I wanted to express my ideas. So I pursued the acquisition of the academic skills that my formation lacked here in Spain where I returned upon graduating from University.  Long before figurative realism was back in vogue, I was defending it refusing to conform to “modern” trends." 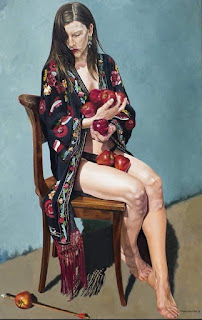 Who were some of your favorite teachers and what lessons did they teach you?

"I had the awesome privilege of having Wayne Thiebaud as an instructor. His paintings of rows of cakes, tarts and pies are well known throughout the world. He was the only art professor in the department who was a realist painter. And he was by far the most successful and well known. That fact alone was extremely encouraging to me and gave me confidence that I could survive as a realist." 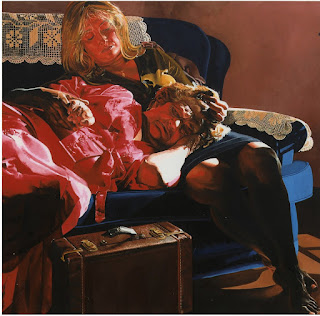 "I wouldn´t dare to do so. I can only say what makes art great for me. It must provoke an emotional response, it must be visually intriguing and it must offer me something unique. For me, art which does that transcends." 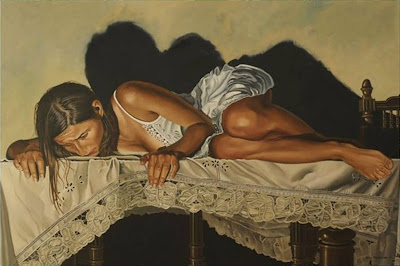 
If time and money weren’t an issue, what would be a dream art project for you? Have you ever painted a large mural?

"I would travel to Asia and Africa collecting reference material for a very large painting with multiple figures. I would love to live and breathe the aesthetics of the cultures there, so different from our own in Western countries for the richness of their colorful traditions. I would love to incorporate that richness into my own work on a very large scale.

"I have never painted a mural and am not particularly drawn to the idea although I love them. But I have painted very large scale paintings, ones that make me feel as if I were physically part of the piece itself which is a profoundly inspiring sensation. The problem, of course, is that it is very difficult to market these paintings after spending a tremendous amount of time producing them." 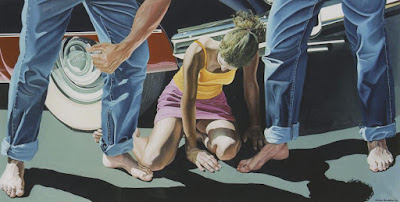 
How do you form compositions? What concepts do you think about and what problems do you watch out for?

"I dwell on the human figure as my subject. Because I like working life size, I generally represent only part of the figure since, as I mentioned before, very large scale paintings are hard to sell.

"Strong vivid colors, intense light and literary symbols help me tell the story, because there is always a story. Sometimes it is provocative in some way or questions the status quo. At other times, I want to beckon the viewer into a whimsical, magical world where things may not be as they seem. My goal is always to entice the viewer into thinking about and seeing things a bit differently." 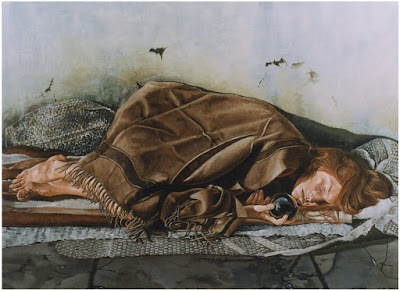 What advice would you give to young art students?

"I would advise them to acquire all the technical and academic skills possible so that they can choose the way in which they wish to make their art. Not knowing your craft is nothing but an impediment to doing exactly what you want to do. Before you break the “rules” you should know them so that doing so is part of your intention as a creator rather than a reflection of your lack of ability." 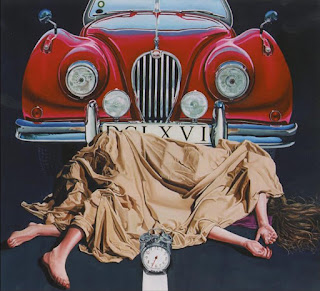 If you could own any artwork, what would it be?

"It would be Lucian Freud´s “Supervisora de Ganancias Durmiendo”. She is profoundly and defiantly beautiful, voluptuous, magnificent, and daring to me. She is a lesson in self -acceptance and a challenge to stereo typical beauty." 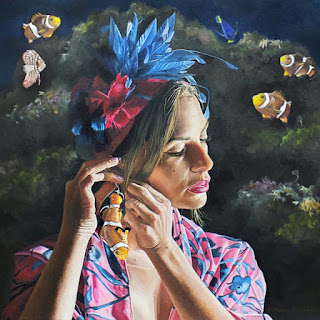 What do you tell someone that thinks art doesn't matter?

"I really am not interested in convincing anyone of the importance of art. Not everyone has to believe that it is as vital as someone like me believes it is. Nevertheless, ignoring its importance as a manifestation of the way humans have perceived, related and responded to their world seems extremely short sighted to me.  Producing art objects has been a fundamental part of human's culture for over 40,000 years.  I feel sorry for those who deprive themselves of the enriching experience that knowing about and contemplating all kinds of art objects provides.  For me it is certainly a fundamental part of who I am and making it makes me happy and whole. It is as important a means of communication for me as words, perhaps more so for it is the language in which I reveal my secret self."