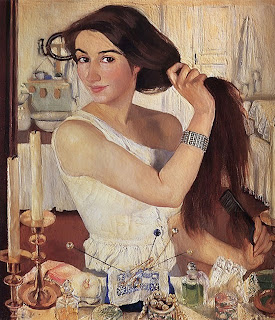 Zinaida Serebryakova was one of the greatest Russian painters of the 20th century. She was born into one of the most prolific artistic families in the Russian Empire (having fled France during the Reign of Terror in the 1790's). Her grandfather was an architect, her father a sculptor, her uncle a painter and her brother, Yevgeny Lanceray, a muralist and designer. Her great great grandfather was the composer Cattarino Cavos. Zinaida's daughter Tatiana was also a painter, designer, and ballerina. Sadly, her father died when she was only two, so Zinaida and her five siblings lived with her grandfather on his big estate in the village of Neskochnoye, Ukraine (a major inspiration for her art). Zinaida lived a charmed childhood, her family being friends with many prominent artists and playwrights. Her family also supported her education, sending her to Kolomensky Women's Gymnazium, where she graduated in 1900. 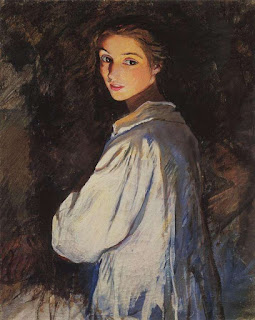 'Self Portrait with a Candle'

Serebryakova was part of the Mir Iskusstva (World of Art) movement - a group of Russian painters (who also ran a magazine under the same name), co-founded by her uncle, Alexandre Benois, that can best be described as a Russian variant of Art Nouveau. To some extent you could consider Serebryakova as one of the greatest Art Nouveau painters, although she also displays certain Realist sensibilities she gained from her professors Osip Braz and the great Ilya Repin, with whom she studied at the Higher Art School in St. Petersburg. She's more often considered a Realist, even though Mir Iskusstva rejected realism in favor of developing a more personal style and Secessionist principles. 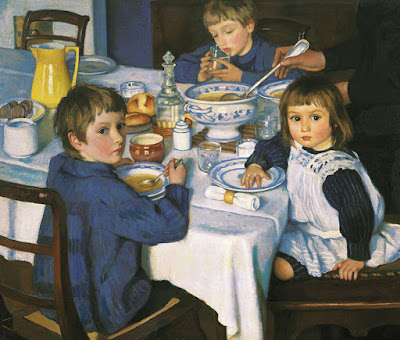 'At Breakfast' 1914
From 1902-3 Zinaida studied art in Italy, and then attended the new Académie de la Grande Chaumière in Paris. In 1905 she married Boris Serebriakov, a railway engineer, and the couple had four children (pictured above and below). Zinaida continued painting and exhibiting her work. In 1916 she went to Moscow with her brother and Uncle Benois, to decorate the Kazan Train Station. Zinaida later refered to this period of her life as "my happy years." 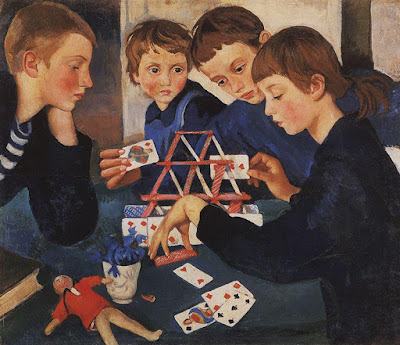 Then, 1917 came, and with it the Oktober Revolution. The monarchy was slaughtered, and the Russian Empire fell into civil war, lasting until 1923 when the Bolshevik Party took control. Zinaida's husband (seen below) was thrown into prison where he died of typhus. Zinaida's family properties were all seized by the communists, leaving her alone with her art to provide for her four children (depicted building a metaphoric house of cards above). While Zinaida refused to paint in the fashionable new Futurist style, she did find some work drawing exhibits at the Kharkov Archaeological Museum. She also got work drawing for the Mariinsky Theatre. She and her family were all critical of the new Stalinist regime - protesting in such a way as to survive the purges... Meaning one could find little notes hidden in book shelves describing their anger. Zinaida's brother wrote in one, "There is incredible impoverishment. Of course, this is the government’s goal to bring everyone and everything to poverty, since it is easier to manage the poor and the hungry." 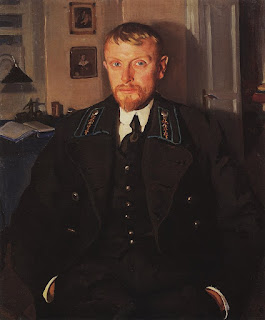 In 1924 Zinaida received a commission and permission to travel alone to Paris to paint a mural. When she finished, the USSR had begun a new crack down on travel and she wasn't permitted to return to the USSR. Over the next four years she was able to get her two youngest children out of Russia to live with her, but her two eldest were forced to stay, and she didn't see them for over 36 years, during Kruschev's "Thaw" in 1960. In 1966 the USSR finally recognized Zinaida's talent, exhibiting her work all over the union, and finally allowing her to return, age 81. 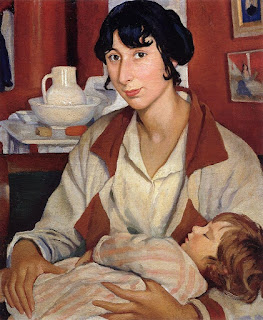 With her new-found freedom, Zinaida traveled throughout Europe and to Africa, sketching everywhere she went, as well as in and around France, where she took official citizenship in 1947. She lived mostly from painting portraits, and sent most of her earnings back to her family in Russia. She and her son Alexander also decorated Baron Jean de Brouwer's home in Belgium with a series of murals, which, sadly, were destroyed during WWII. 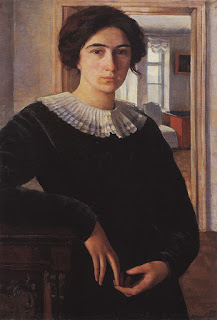 There's so much that makes Zinaida unique, her works stand out immediately and recognizably as her own, even as her style varied according to medium. Her oils have a different character than her watercolors, which are again much different from her charcoal and pastel work. But they all share a love and joy for the world and her figures, which always shows through, even in the gentle defiant way so many of her sitters stare at the viewer. And they all share a palette uniquely hers, however reminiscent it may be at times to Edward Hopper, and others. 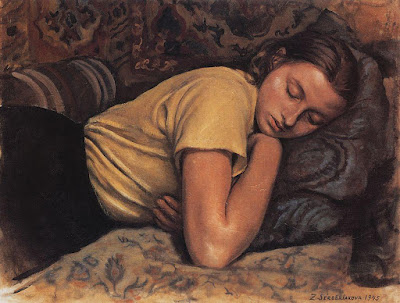 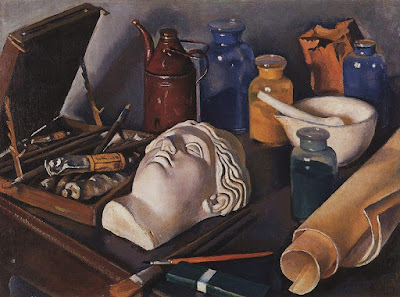 'Still Life with Attributes of Art' 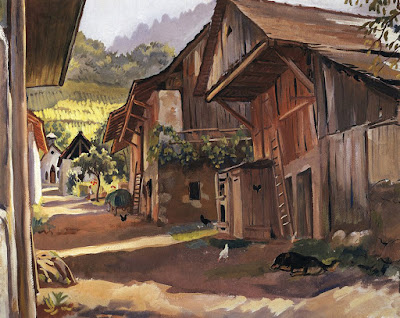 'The Alps. Village in the Savoie' 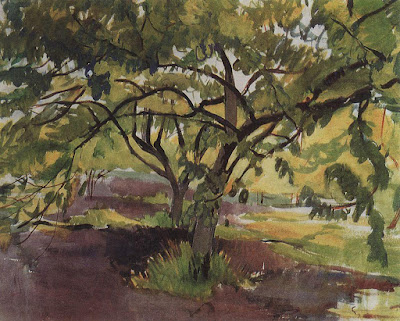 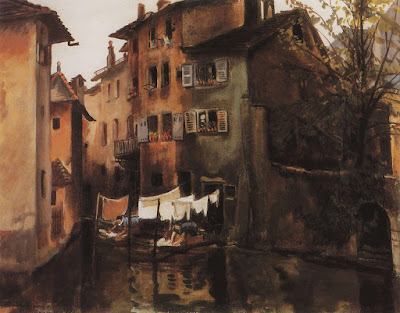 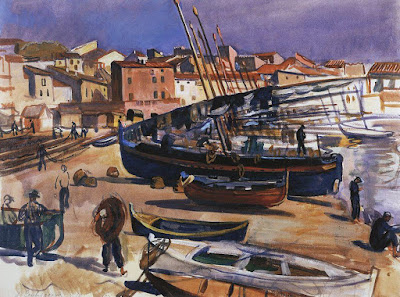 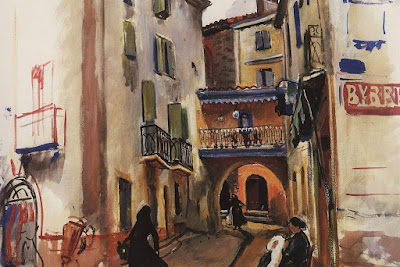 'Collioure, Street with an Arch' 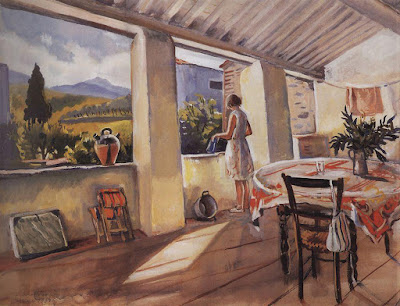 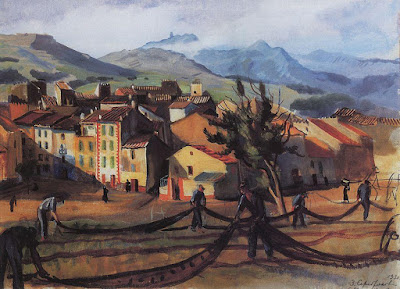 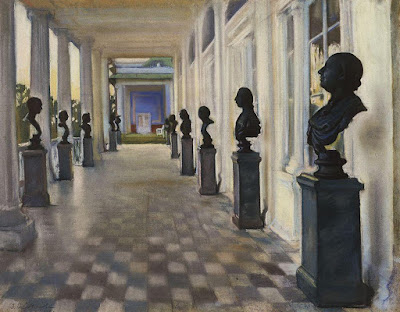 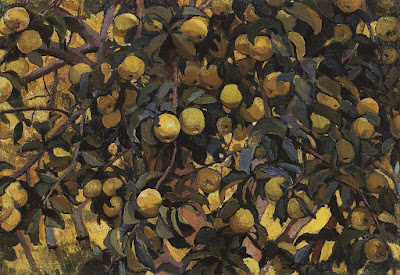 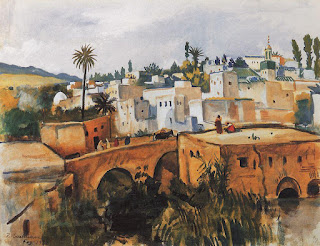 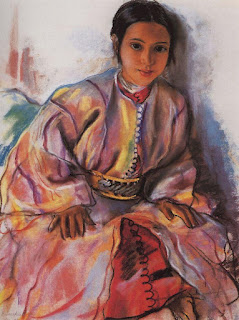 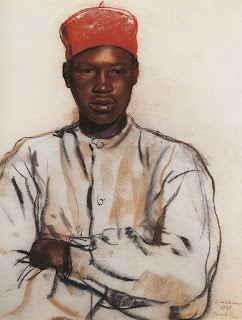 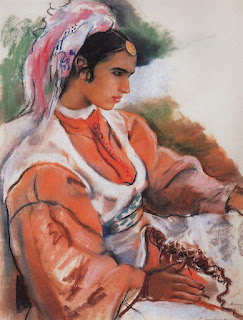 Some notes taken from Freeart.com