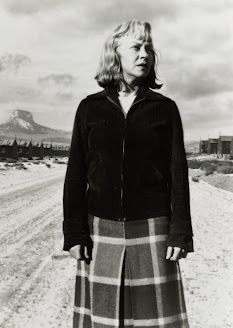 Estelle Peck Ishigo was an American artist who, along with her husband, had to endure horrible circumstances during World War II, due to a wave of anti-Japanese hysteria that swept across the US after the Japanese bombing of Pearl Harbor, in Hawaii. Her story is preserved in an Oscar winning documentary by Steven Okazaki, titled Days of Waiting. 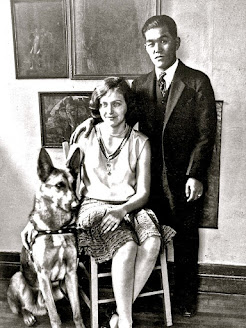 Estelle Peck was born in Oakland, California. Her father was a painter of portraits and landscapes, and her mother was a concert singer. She had a talent for painting, singing, and playing the violin, but, at the age of twelve her parents abandoned her. She moved to Southern California to live with relatives, and soon after, strangers. This cruel upbringing gave her a unique perspective on America, and life, making her value people for who they were, as opposed to the usual biases and assumptions of the time.
Eventually, Estelle attended the Otis Art Institute in Los Angeles, where she met the love of her life, Nisei Arthur Ishigo. in 1929, age 30, she and Arthur went to Mexico to get married. They had to, it was illegal for whites and Japanese to marry in California. They lived happily together in LA until WWII came, and the bombing of Pearl Harbor. The couple lost their jobs, and were soon forced, along with 120,000 innocent, law-abiding Japanese Americans (over 62% were US citizens, taken with no trial), to leave all their worldly possessions and land, and get on buses to go live in concentration camps, there were ten in total.
Estelle and Arthur were sent to the camp at Heart Mountain in Wyoming. Because Estelle was white, soldiers gave her the option of abandoning her husband, and living freely - Estelle declined. She was a devoted, loving wife. She knew the injustice of the situation, and noted in her letters that no Japanese American had ever committed any act of spying or sabotage on US soil throughout the entire war. Now, all she could do was bear witness, with her art and photographs, which she carefully hid from camp guards for three years, as she and her husband struggled to survive the harsh Wyoming winters of the camp. 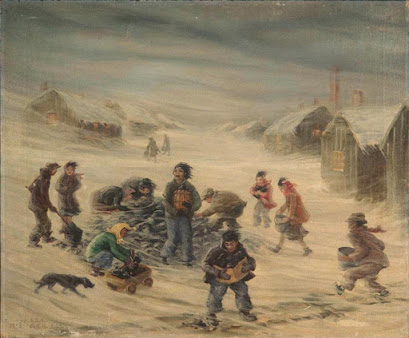 'Gathering coal at Heart Mountain Relocation Camp'
In Days of Waiting, Estelle's letters are read, telling of the horrible things she witnessed, from the very start of internment. She tells of families forced to take all they could carry in suitcases to the buses - of a girl so scared she literally died of fright right on the sidewalk. Japanese Americans were honorable people. They saw themselves as proud Americans and didn't understand why they should bear so much dishonor for what a foreign nation did. Estelle says it was too much to bear, and many committed suicide. There weren't many ways to do it in the camps, with guards present, and the options were ghastly. I won't go into detail, but if you watch the film, Estelle showed bravery and grit in defiantly photographing and documenting these tragic events, so that the truth would endure. In total, 1,862 people died in these camps in three years (seven being shot by sentry guards). 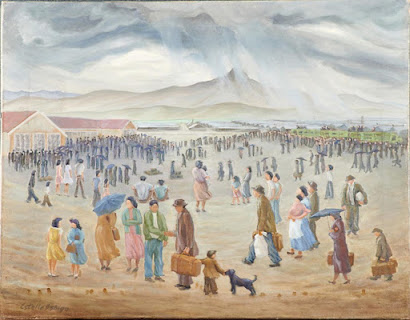 In her works at the camp, Estelle did her best to show not just the harsh conditions, but the spirit and resolve of the prisoners. These were Americans, and they acted that way. They formed clubs and sports teams. They played baseball and acted in plays. 'Heart Mountain, Wyoming'
FD Roosevelt waited until 1945 (well after his 1944 election) to release these prisoners. Each was given $25 and a ticket home - although there was nothing left to come home to. All their land and homes had been taken from them. Their businesses ruined. Their reputations ruined. Violence against Japanese Americans was common, and Estelle wrote of young Japanese children pretended to be Chinese to avoid being beaten up. Some people were so despondent and infirm, they didn't have anywhere to go, so they stayed in the camps - many of them elderly. But, the camps started removing basic services until eventually kicking out the last of these unfortunate people, and closing. 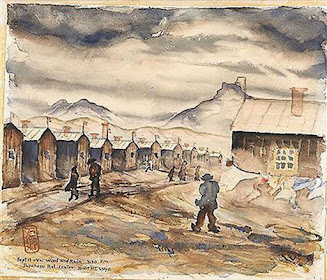 'Heart Mountain, Wyoming'
The reality of the American government's mistake, its gross error in moral judgment, eventually made its way into politics, under the topic of reparations. In 1976 a Japanese 'Redress Movement' got President Gerald Ford to admit the camps were wrong, and to formally terminate Executive Order 9066 (which started the camps). It took another dozen years, but congress finally passed the Civil Liberties Act of 1988, signed by President Reagan, which paid $20,000 to each remaining survivor of the camps (at the time, around 82,000 people). 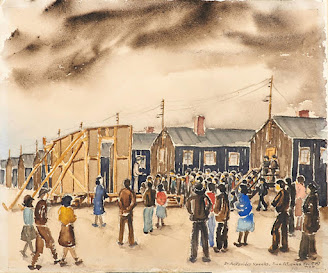 'Heart Mountain, Wyoming'
Recently, comedian John Oliver discussed the topic of US history, and how it's taught in schools on his show Last Week Tonight. In it, some parent voiced his concern about teaching children America's darker history, and the effect it might have (25:25 minute mark):
"The one thing I want my kids to know, when they get out of school, about America, is that the worst day in America beats the best day in any other country. That seems pretty easy. It seems like we've got this great focus on the negative history of America. Take, for instance, slavery - instead of looking at it in a positive light, that Americans overcame something as evil as slavery, and that we're still a great nation today, should be a testament to the kind of American spirit that exists in this country."
While it's true that schools must consider students' age, understanding, feelings, and tact in how they address history, and some teachers have gotten it horribly wrong from time to time, two things bother me about this statement. First and foremost, don't you want your children to know the truth? Who wants their kid getting out of school only knowing 'one thing'? And the whole idea that life in the US is better than elsewhere is subjective and ignorant. Has this parent ever lived anywhere else?
And second, the actions of a government do not indemnify all its citizens, even in a democracy such as the US. A country is more than its government, and the criticism of one does not automatically extend to the other, nor should it extend to future generations such as school children who weren't even alive then. The idea that history should make children feel guilty is absurd. No good teacher would do that. When I was a high school student, our teacher passed around photos of Nazi concentration camps - brutal photos of bodies in piles. It was horrible, but it showed us proof that it happened, that people, even in modern times, are capable of this kind of barbarity, and that we should watch out, so that it never happens again. I didn't feel guilty, just scared and disgusted. And I'm thankful for that lesson and others like it, where I saw the bitter truth. It's necessary. If you have to hide your head in the sand to love something - what does that say about you? 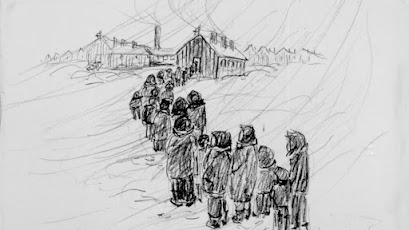 'Heart Mountain, Wyoming'
In Days of Waiting, we learn that Estelle and Arthur never managed a successful career after the internment. Estelle was barely making it on public assistance, when other Japanese-Americans found her and rescued her from poverty. They knew about her because of her art. They found that first, and then they found her, to learn her story and use it and her photos to show the truth of what happened. Perhaps more than any other, we have Estelle to thank for even discussing this tragic series of events. I think of Estelle when people ask me why art matters. So should you. 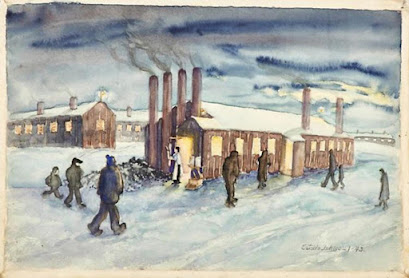 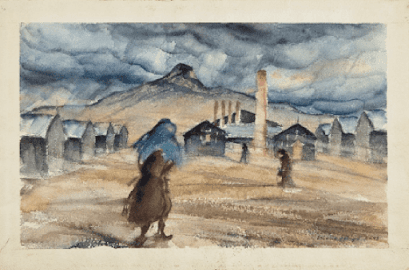 'Out in a Storm, Heart Mountain' 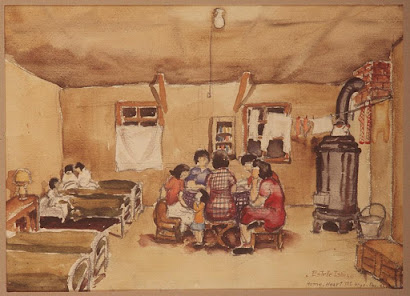 'At Home at Heart Mountain' 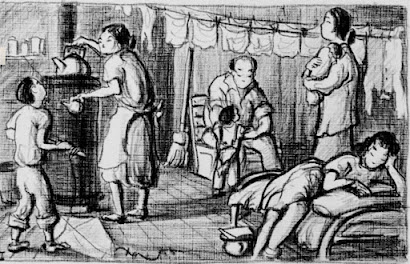 Inside the Camp at Heart Mountain 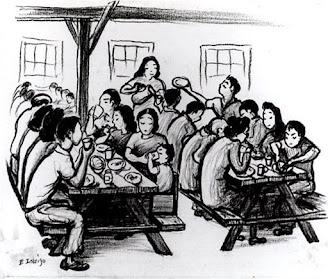 The Dining Hall at Heart Mountain 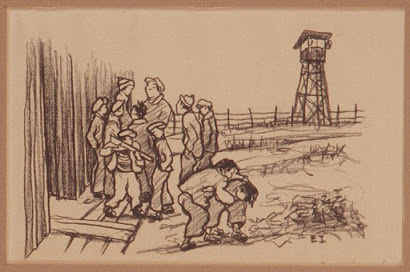 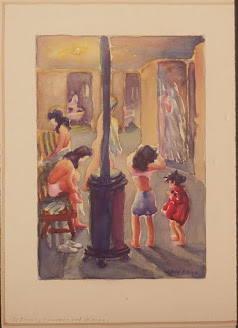 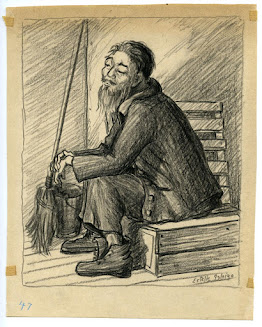 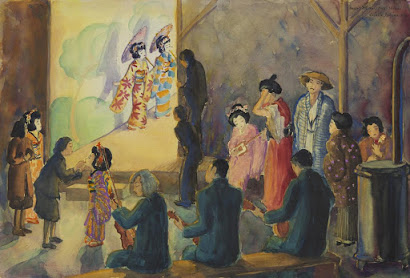 A theatrical performance at Heart Mountain 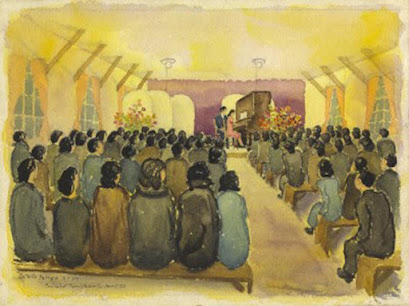 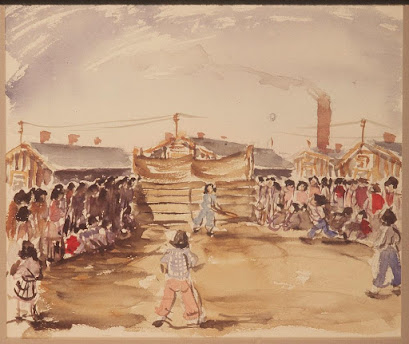 'A Baseball Game at Heart Mountain' 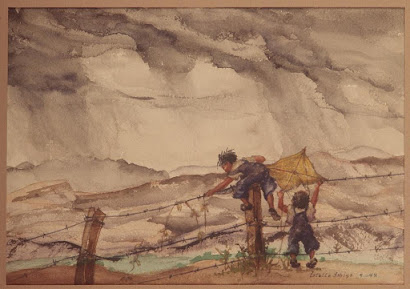 'Boys with a Kite' 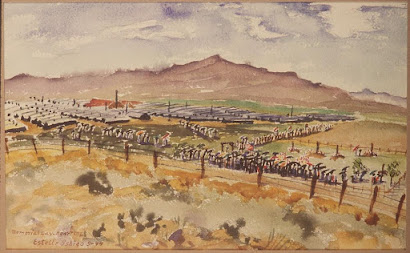 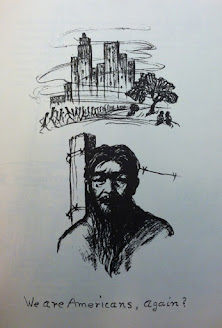 'We Are Americans Again? 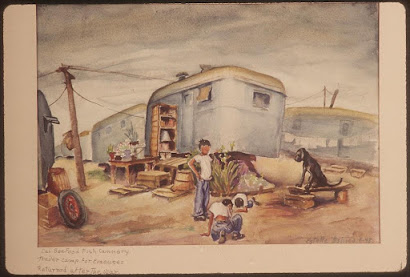 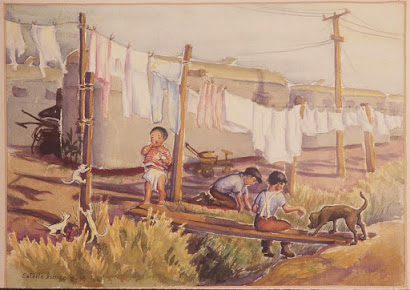 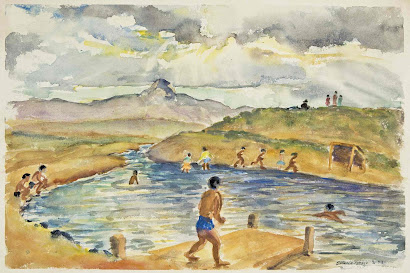