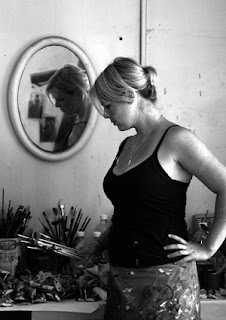 Anwen Keeling is an award-winning realist figurative painter from Sydney, Australia where she teaches life drawing at the College of Fine Arts. She earned her BFA from Australia National University (ANU) with First Class Honours, and was awarded the University Medal. She then earned her MA in fine art at the Winchester School of Art in Barcelona. She won the ABN AMRO Emerging Artist Award in 2007 and the Canberra Prize in 2003. And, she was a finalist in the Sulman Prize (at least twice), the Metro 5 Art Award, and the Doug Moran Portrait Prize. 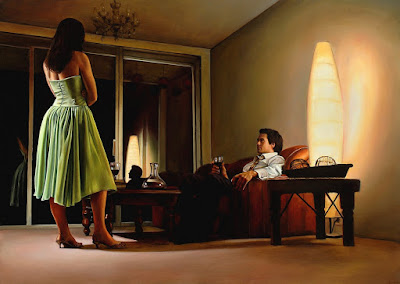 Anwen Keeling is a story teller, and her favorite genre is mystery. She sets her characters in moments of tense drama - perhaps conflict? Or a lone figure in pensive thought, as in her series 'Waiting'. Through this tension, she makes ordinary familiar places feel unfamiliar, cold. The lighting is often drab, dark, stark, like in film Noir. And, her titles give tantalizing clues as to the situation, but provide no answers. The resulting images hint at a life entrapped by the angst of modern day existence - but not entirely without hope. It raises questions as to why we sometimes make life harder than it is. Anwen explains she wants to give the viewer, "a sense of quietness and stillness from our otherwise hectic existence."

In her interview for Orphan Magazine (2007), she says:

"I think we are all voyeurs. I don’t find myself creating stories, as such. I am more intrigued by moments, such as the fall of light on someone’s collarbone, or the tilt of a head, a gesture or the fall of shadows. I leave it up to others to tell the stories. In some ways my paintings are like a single page from a book, enough detail to understand a character and their environment. It’s up to you to be the author and decide the beginning and ending—most people tend to project their own experiences and emotions onto the work." 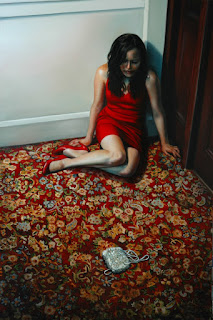 In this 2010 interview with Bianca Georgiou, Anwen explains that while her models are all friends of hers, the stories are fiction. While her figures often appear nude, Anwen explains,

"I definitely think that a woman’s appreciation of the female form differs significantly from the male gaze. There is a sense of voyeurism in my works, and even a fragility to the subjects; afterall, the viewer is looking in on a very private moment. I guess there isn’t a hugely strong sexual tone, it’s more of an observation of form and bodies and light. The figures I paint are beautiful, but yes, the female gaze and the male gaze are very different. . . . It’s really about looking at a person absorbed in their thoughts, in their own world." 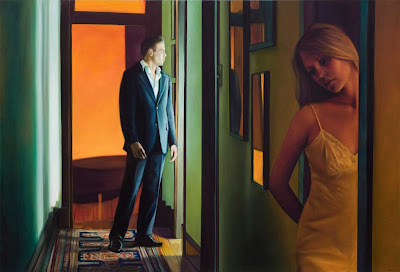 Anwen's mother is also an artist and inspired her from an early age. In her interview with Vogue Australia (2007), she says,

"My mum is an artist and as a child I was always allowed to use her materials, so I was constantly making things- and a mess! In kindergarten I decided I wanted to be an artist or a jockey, but my size and ability to fall off horses (still do) ruled out the last career option! I have always pursued a career as an artist and went straight from secondary school to the Canberra School of Art. I think I had a certain amount of naive optimism." The Vogue article continues by asking her about beauty:

"Beauty is such a difficult concept to quantify as it is so subjective. In all my years of study the word “beauty” was often used as a pejorative term, to indicate something superficial or trite, but I have never been able to relinquish the desire to paint (what I believe to be) beautiful images. I see beauty in the everyday, in the simple grace of a movement or the curve of the lip of a bath, in the reflection of fabric on skin, it is everywhere. I rely on a natural beauty in the work. I photograph my models in their own homes and I prefer not to alter their environments to overly ‘stage’ the compositions. I don’t style the girls in any particular way. They choose their own clothing, make-up and accessories which we then discuss and agree upon the elements that will create the best effect. I rely on natural light to give beauty to the situation and the model. I paint images that I find appealing, depending on composition, colour and mood." 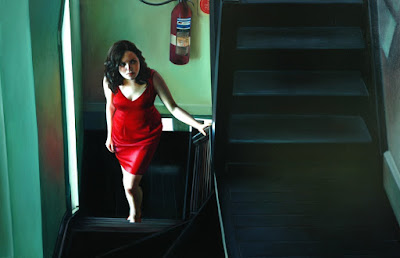 Anwen Keeling paints from photos she takes of her subjects, but, although highly detailed and realistic, she does not consider herself a Photorealist - a term coined in the 1970's for a small group of post-modern painters who tried to copy photos (often from newspapers and magazines, and with the aid of projectors) in as thoughtless a manner as possible - devoid of any soul or personality. Anwen doesn't do that. In her own words,

"The true definition of Photo Realism is that you can literally hardly tell a painting from a photograph. When you actually look at my paintings in the flesh, you’ll notice that there’s quite a lot of texture and visible brush strokes. I never deny that it’s a painting, I never deny the brushwork. The photograph, is however, integral to my working process. I work from photographs that I stage myself. As some works may take months to complete, the camera is a necessary tool to document details of light, reflections and tone. For me, the painting process is all about mixing colors, and achieving the colors that are true to life, mimicking light and using the glazes to get that effect."

Even more important is her eye and voice, drawing attention to the narratives she invents. 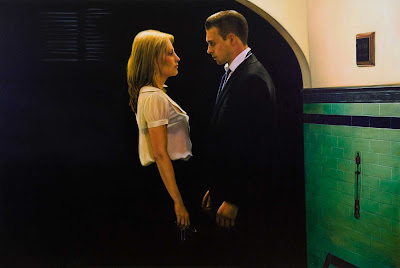 "I am constantly amazed by the qualities of paint and the colours available. I lean heavily towards the translucent colours, and even when using opaques, tend to glaze over them with translucent colours. There is something incredibly beautiful about pigments, such as carmine, and the alchemy that happens when you mix it with your medium and then glaze over the painted surface.

"I tend to over saturate the colour in my paintings, and there is usually a colour scheme in each piece, although that begins when I set up my photographs. I am quite bewitched by inky shadows and glowing flesh, and have always been influenced by Caravaggio and his mastery of chiaroscuro." 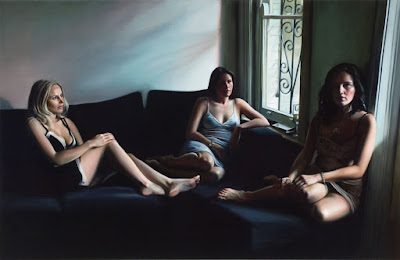 Storytelling is not her only specialty. Anwen also paints amazing portraits of horses (see below). She has a background in horse riding and in 2010 began a series of paintings on the best, most celebrated sport horses in Australia - each set against a light, blank background, to set our gaze squarely on the horse. According to this article (Dedece blog, 2011), Anwen even said, 'I really fancy myself the next Georgette Stubbs.' George Stubbs was a famous 18th century painter of horses. 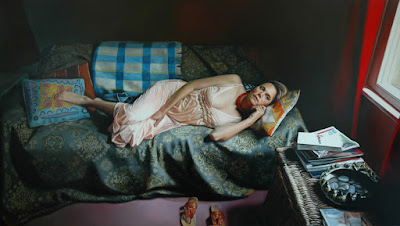 Anwen also names Edward Hopper and Andrew Wyeths as two sources of inspiration, and plans to complete a series of landscapes in similar style, based on her travels around the world. She also names Alfred Hitchcock as a source of inspration, "Hitchcock has been a long standing favourite, because of the simplicity and strength of the framing of his scenes and the use of the single light source. " 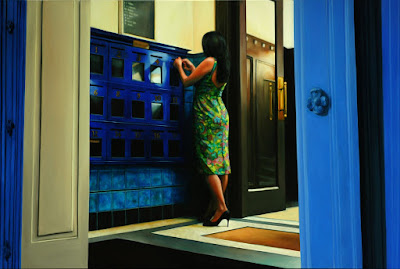 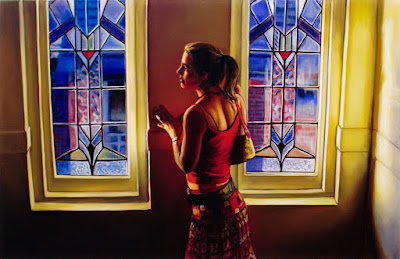 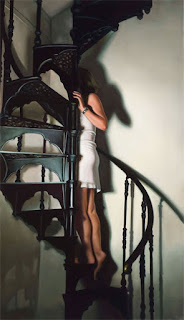 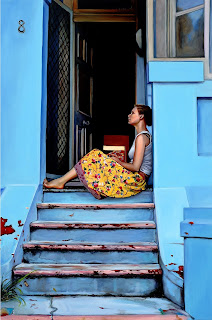 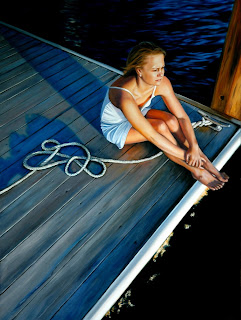 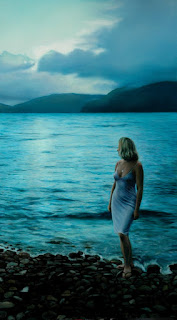 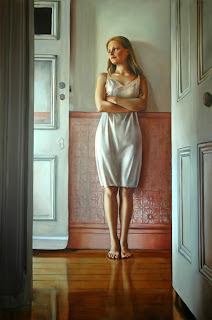 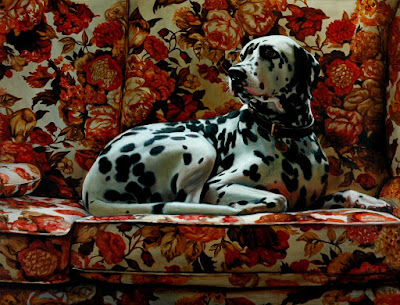 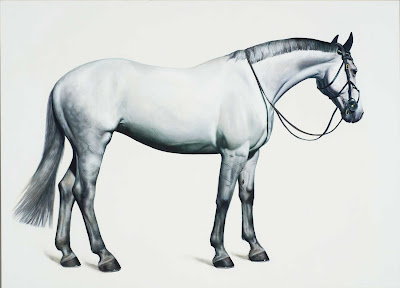 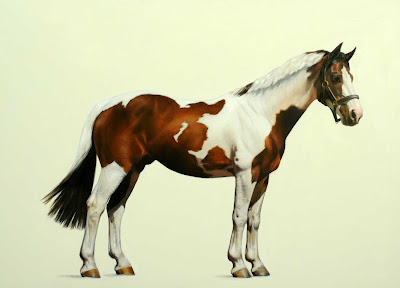 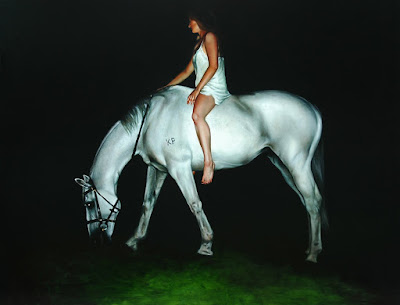 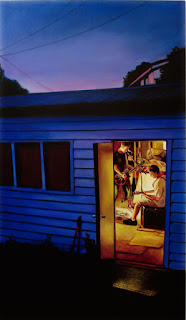