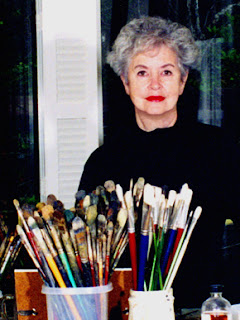 Dale Wilson Kennington was an artist who lived most of her life in Dothan, Alabama. She is referred to as a "New American Realist" a term that means little as a movement (try looking it up), but refers back to artists such as Edward Hopper and George Bellows (the old American realists?), from the start of the 20th century. Funny enough, Dale cared less about capturing reality than forming good, dynamic compositions. She said in an interview with Kristen Zohn, for Kennington's book, Grandeur of the Everyday:

". . . I am not concerned with capturing the reality of the scene. Early in my career, when I was painting portraits of the neighborhood children, I learned that I had to capture their reality. I had to get an exact likeness, and if I wanted to change it, I had to have a good reason to do so. Since then, I have been more concerned with making the painting balanced than worrying about the subject matter, so I can add or subtract whatever I want to. I just want the painting to work."

At first this seems counter to the origins of Realism, but then again, even Courbet and Manet's figures feel purposefully posed and composed, as do Hopper and Bellows's. 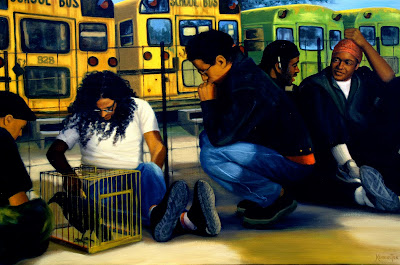 Dale Kennington earned her BA in art history and design at the U of Alabama in Tuscaloosa in 1956, the same year she married Don Kennington, a veterinarian. She began painting children's portraits in the 1970's as practice, so she could paint good ones of her own children. According to Dorothy Joiner of LaGrange College, she was so determined she drew five hours a day for six months to train her hand at figure drawing. She grew a client list and by the 80's she was painting full-time in a studio, having moved on to contemporary genre scenes of daily life. In 2009 she received the Alabama Governor's Arts Award and was noted as a 'Master Artist'. 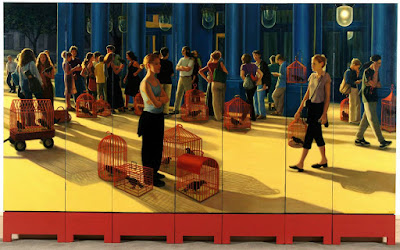 According to Wikipedia, Dale liked to paint people in every day activities and rituals, like riding to work or sitting in a bar - but she painted on such a grand scale, it lends a  monumental quality to these small, seemingly insignificant moments.. She used a camera as a 'rapid-fire sketchbook' to get ideas for settings and scenes. She wanted to provide a snapshot of people how they really are - even painting men at a KKK rally, in a work titled 'Do You Know Your Neighbors?' in 2001. She painted reality, the good and bad, unfiltered. As a southerner, she saw the poison of racism, and referred to it in the form of a metaphor - a crow named Jim, often held in a cage. In her painting under that title (shown at the top), the bird is finally being let out of the cage. 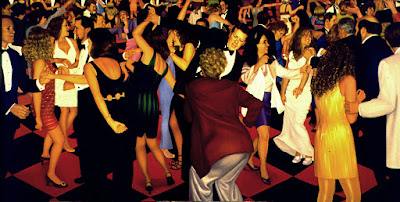 She began painting on folding screens following her husband's death in 2002. She described this in her interview with Zohn:

"After his death I began to work on them - for three years, I would get up every day in the morning at 8:00, work in the studio until the light was gone, and then fall into bed, only to get up and do it again the next day. . . . I could concentrate on the project, and it took my mind off of my loss. I did not realize it at the time, but looking back, I see that death was a theme throughout the whole series. For instance, Ritual for the Dead (2004) shows people coming out of a funeral in Paris, and they are getting back to their normal life: hugging a friend goodbye, hailing a cab, carrying a briefcase and going to work. 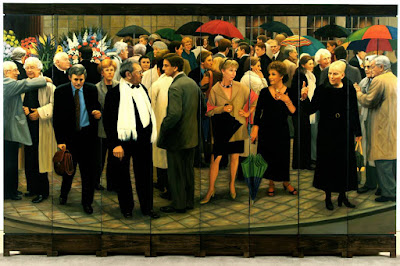 The other side shows a cemetery that I had photographed in New Mexico five or six years before I ever thought about producing the screens." 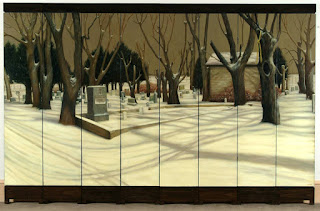 She titled these ten screens her 'Contemporary Mythologies' series. She painted both sides of each screen, seeming to tell a story, but leaving many questions. To add to this intrigue, she added secret, locked compartments to each screen, sometimes containing an additional painting, and sometimes apocryphal letters relating to the stories. As an example, Dale gifted this panel to the Julie Collins Smith Museum of Fine Art: 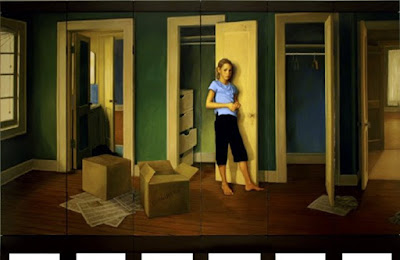 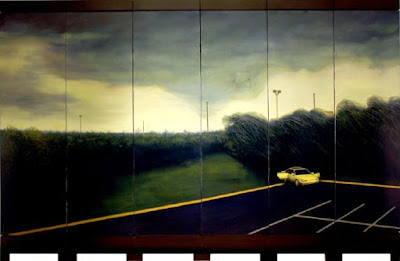 Hidden inside is a letter which reads:

The work seems to describe a divorce, involving a couple who are otherwise good people, but not good for each other. But, with only this to go on, the work is filled with mystery and tension - much like familial problems in real life. 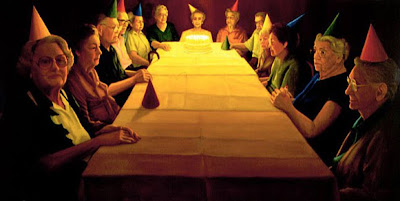 Following her screen series, Dale suffered a stroke which kept her painting for a year, and then wrestled with cancer. Nevertheless, she always came back to the studio, filled with inspiration for more works of art.

In her book (p. 25), Dale wrote, "I am an artist who begins each painting not knowing what it will look like . . . where it will end. I usually begin with the background and work my way forward. It sounds simple . . . but it's not. It rarely works the first time or the second . . . or the third. I learn something each time." "What I'm striving for when I paint is a feeling. Is the painting happy looking or sad? Is it supposed to be in the morning hours or the late afternoon? Are the people fresh or tired looking? Are their lives complicated or running smoothly? These things are what give 'the story' to the painting. I almost never get the same story when viewers are telling me about their interpretation of the work. My paintings require both the artist and the viewer. I cannot fulfill both positions." 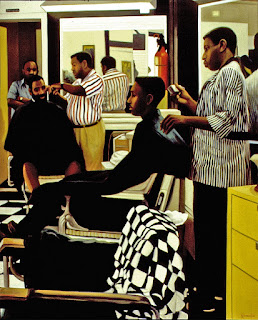 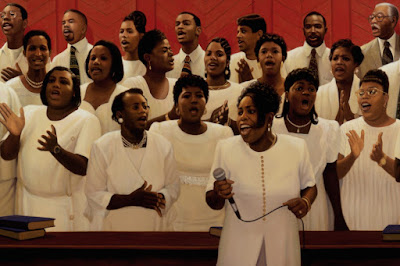 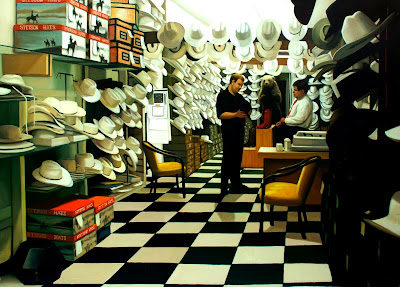 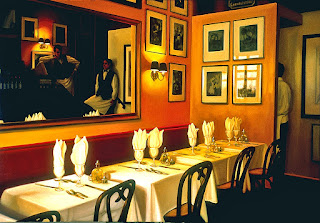 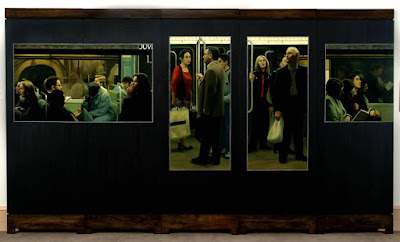 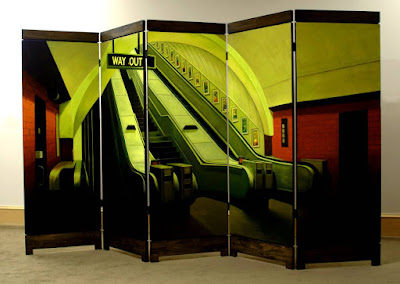 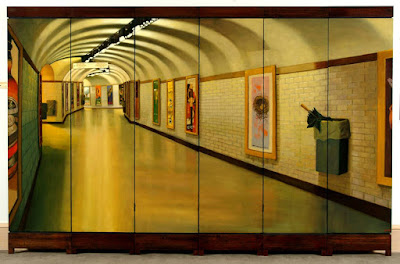 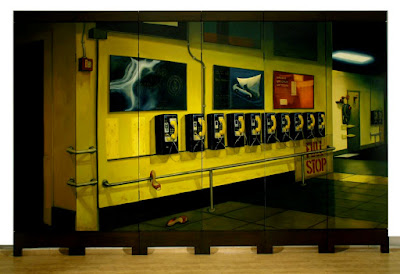 'A Chance for Redemption' 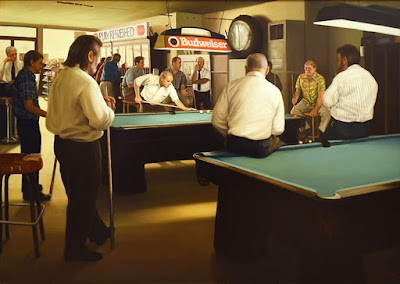 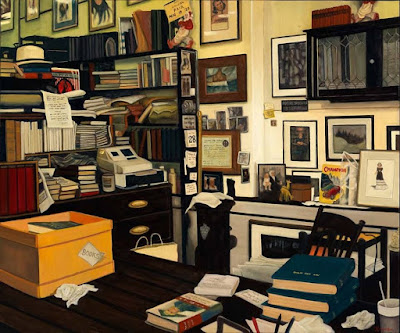