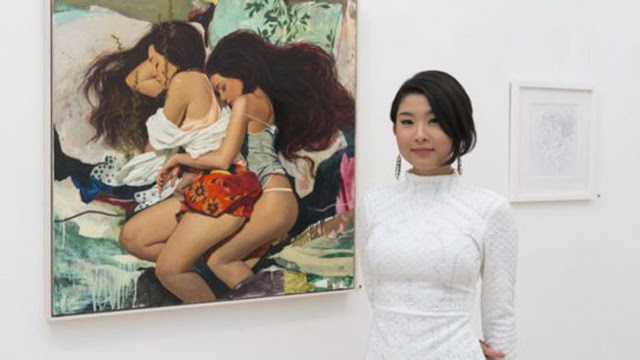 Soey, next to her painting 'Earthlings', completed in 2015

Soey Milk, born in 1989 in Seoul, South Korea, came to the US in 2000, and lives in Los Angeles (LA), California. She graduated with a BFA from the Art Center College of Design, in Pasedina, CA, and is now a professional painter, represented by the Corey Helford Gallery in LA, where she had her first solo exhibition (2014) and by Evoke Contemporary, in Santa Fe, NM. 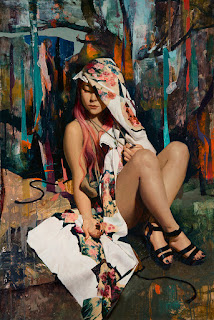 Soey typically paints beautiful young women in intimate and alluring poses, often nude, set against abstract backgrounds, at times resembling a studio space, as in 'A Particular Place' shown above, but often suggesting a surreal jumbling of different spaces and places. The models in her works are her friends, as she stated in an interview with Juxtapoz (2018):

"I try to only work with people I know, who are my friends. It's very important for me to love the subject of a painting even when it’s not the figure that I’m working on. If I'm working on the background or the weaving of the background and the figure of a particular painting, I have to love the relationship the figure has with the chaotic, abstracted mass that I’m painting. So naturally, if I'm painting a figure, it doesn’t matter how talented they are at being a model—it matters how well I know them. How much I love them."

Although she paints her friends, it's not accurate to call these portraits, at least not in the usual sense. Soey paints each piece as a way to preserve memories from her life. In this interview with WoW x WoW, she compares her art to a diary with each work representing a chapter in her life, say a pet dying or the start of something new. 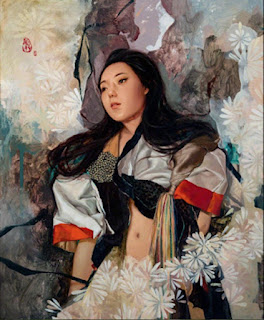 Soey Milk begins each work with what she calls a 'seed drawing' meaning a sketch that will grow like a flower into a final painting: 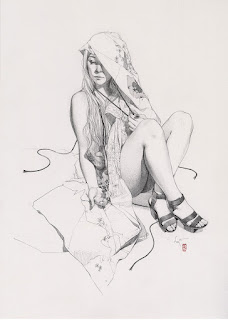 'Lovely Bloodflow' 2015, was the basis for 'A Particular Place' shown above

Soey also mixes non-traditional materials into her paints and canvases, like sand, dirt, and even chicken feathers (she keeps a flock at her home). 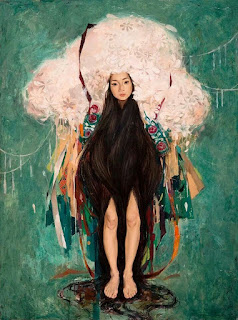 Soey Milk credits several influences to her work and aesthetic. Having spent her childhood in South Korea, she says of the colors there (WowxWow, 2018):

"I’m interested in color. On traditional architectures of Korea there is an ornamental painted pattern called ‘danchung’ that keeps wood from rotting. It is a beautiful organization of bright and bold colors, and I’m in awe of the graceful arrangement of the explosion of hues. That’s one of the biggest factors I try to pull into my pieces."

Soey credits her mother for her love of art making. She said in this interview (FLATT Magazine):

"When I was growing up in Korea, I ground up leaves and flowers, painted on rocks, and made sculptures out of mud and icicles under the guidance of my mother. Adventure, paying attention to small things, and embracing mistakes is all a very important part of my work process and I believe it originates from my childhood. . . . She taught me to recognize, accept, and appreciate different forms of beauty, which I find pivotal in my development process."

She also loves the art of Gustav Klimt, saying " I admire the freshness and the simplicities of his work, that were acquired by years and years of work. The way his hand melted into every piece, that’s how I want to be." If Soey could have any artwork in the world, it would be Klimt's 'The Virgins': 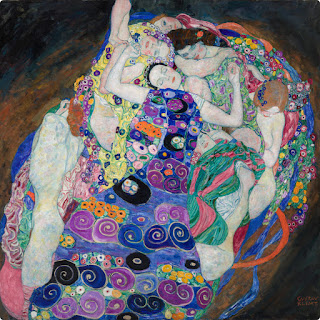 Since so much of Soey's work is autobiographical, it's informative to know a bit more about her. In her interview with WowxWow, she says:

"I grew up in a strict setting. My dad’s side of the family always told me to ‘be a girl, be a woman’. I remember as a child watching a movie where a girl visited her grandmother, and as soon as the front door opened they gave each other huge hugs and kisses on cheeks. I remember that being really foreign to me. In the beginning of my relationship with Kent, I told him that my family felt very distant to me and I had no idea how to bring us together. I clearly remember him saying, “No one’s going to know that you love them unless you tell them. Go on and tell them.” And that was a huge breakthrough for me. It gave me relationships I’ve never had, it completely changed my attitude towards life." 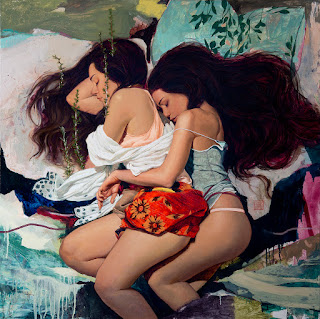 What appeals to me most in Soey's works is the love that shows through for her subjects. You get the sense she's saying in her work what might be difficult in words, but it shows through in the care she puts into each picture - not just the realistic details of clothing, every wrinkle, every flower - but also the energy felt in the color schemes and treatment of paint in the metaphysical environments surrounding them. You get a good sense of who these people are, and what they mean to her. She gives them each a sense of strength and quiet dignity. I think these paintings are as much about freedom and independence as they are about her past.

Soey Milk has a website and is active on social media, if you would like to follow her. In the coming days, I hope to contact her and ask a few interview questions regarding her work and art education. I encourage you to follow her as well, although do note her work contains nudity and won't be appropriate for younger audiences. Soey Milk is a young artist with a wealth of talent and creativity, and many long years ahead of her. I'm certain she'll continue to elevate her craft and the power of her voice in the years to come. 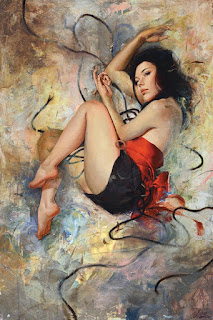 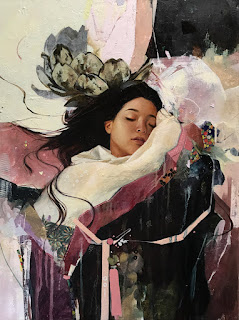 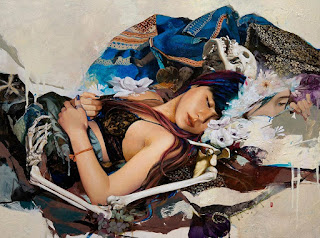 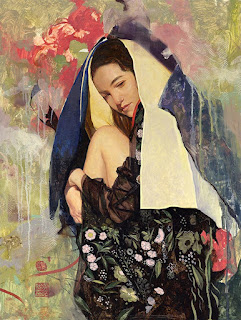 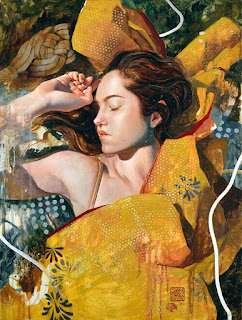 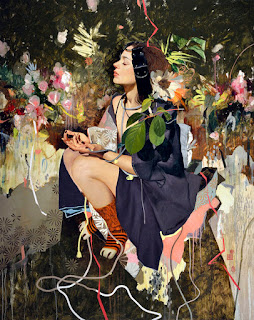 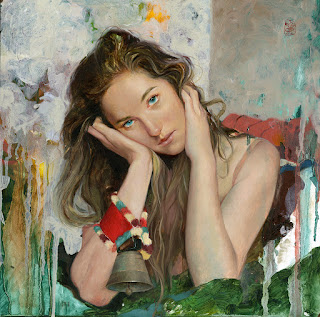 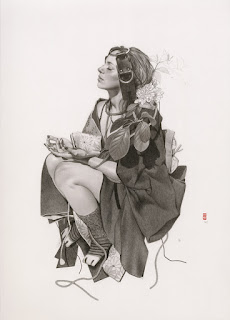