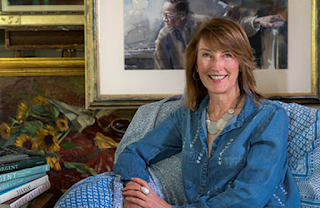 Mary Whyte is an amazing, award-winning watercolorist and book illustrator, from Charleston, South Carolina. She has authored many instructional books and monographs. Her latest is We the People: Portraits of Veterans in America. She has also illustrated children's books, such as P is for Palmetto, Snow Riders, and I Love You Purplest. In 2013 Mary was awarded South Carolina's Governor's Award for the Arts, and in 2016 she won a gold medal (their highest honor) from the Portrait Society of America. She has been featured in many prominent magazines, such as International Artist, Artist, American Artist, American Art Collector, Charleston Magazine, and L'Art de Aquarelle. She tours around the globe, exhibiting her work and teaching workshops. In addition, the South Carolina Art Ed Association has named an award in her honor, giving $5,000 a year to the best art teachers in the state. 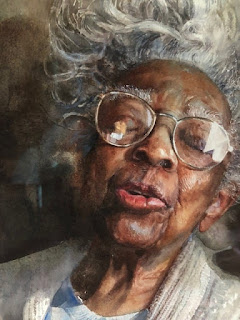 Mary Whyte grew up in a small town in Ohio. She showed talent at a young age, selling her first work while in the 8th grade. In high school she advertised $20 portraits in the local newspaper. She had her first solo show at eighteen, and decided to make a career of painting. She got her BFA at the Tyler School of Art in Philadelphia, where she met her future husband, a fellow student there. She spent one year abroad in Rome, studying the art there.

In this interview with Paul Sullivan (The Artist's Network), she describes when she first fell in love with watercolor:

"I first experienced watercolor when I was in a seventh grade after-school art class. We were outside painting a landscape, and I was tentatively dabbing my brush at the paper. I remember the teacher taking my hand with the loaded brush, and making a bold, curved stroke across the entire sky section of the painting. To me it looked like a colorful comet streaking across the sky, leaving behind a tail with tiny sparkles of white paper. I have never gotten over that feeling of exhilaration when I paint with watercolor.

"In the seventies and eighties there were no online videos or instructional DVDs available about watercolor technique. Watercolor wasn’t (and still isn’t) traditionally taught in many of the academies, as it has always been viewed as a “lightweight” medium. Back then I couldn’t find anyone to teach me watercolor, so I learned various techniques on my own by studying art books and going to museums. I learned by experimenting, trial and lots of errors."

She also lists some of her greatest influences in watercolor: Sargent, Homer, Henry Casselli, and Andrew Wyeth. In this interview with Charlene Freeman, Mary also credits Klimt for inspiring her to paint quilts. 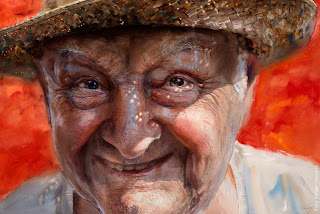 In an interview with CBS News, we learn that she spends two months every year alone in a little studio, where she, "paints, eats and sleeps."

In an interview for the Manatee Art Center (2016), Mary Whyte says that she mostly paints people she has known for years. Many of Mary's favorite models are the Gullah women who live in her home town of John's Island. She says, "There's a group of women on John's Island that I've been painting now for almost over 25 years, that gather every Wednesday. They're Gullah, and they gather to make quilts. And, I remember driving down Bohicket Road sometimes and seeing the newly-made quilt tops they'd just washed all out on the clothesline, lifting up into the breeze."

"All of these paintings are people right now, and people that largely live their life under the radar. They're not celebrities, they're not people that are well known, but live out their lives fully, but largely unrecognized by everybody else." 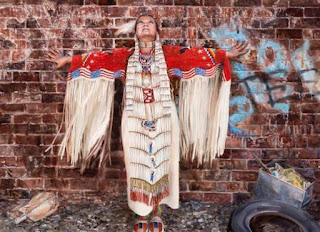 Mary Whyte doesn't simply paint friends in town. She's traveled all around America, painting portraits that show people working, mostly blue-collar jobs that are slowly vanishing. Together they paint a portrait of America, documenting its life and history. She says, "None of the paintings are exactly what I saw. but they are, indeed, what I felt about that moment." 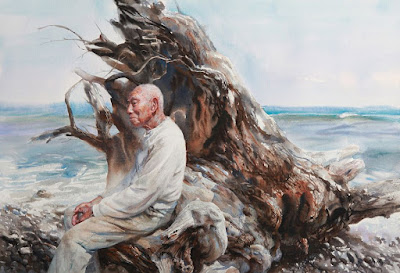 This is essential to her work. As she explains with Sullivan (Artist's Network):

"There are three components to creating expressive work. The first is learning how to paint, which means learning the vocabulary of composition and technique. The second aspect is learning how to see, which relates to discerning the nuances of value, color, form and light. The third aspect is learning to recognize how and what we feel, and translating that particular sensation and emotion into an expressive and meaningful work of art. This last component is what ultimately defines great art—which is work that illustrates what is essential to the artist and is felt by the viewer."

She adds in her interview with Freeman (p. 3):

". . . once the artist has achieved a level of understanding, he or she will soon discover there are more hills to climb. And so this is the common dilemma all artists face: do I move forward? Not climbing those hills results in doing a safe version of the same painting over and over again. Going forward means taking chances and risking failure. The journey for artists wanting to grow and become better painters never gets any easier, but it does get more satisfying." 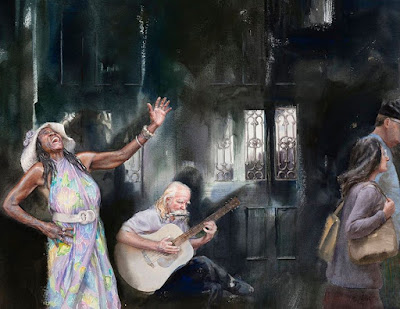 She also states, "Design is a major component of painting, and is too often overlooked by artists. For me, the most critical part of making a painting is in the preparatory thumbnail sketches. Here, the concept is made clear by having a concise design, dominant shape and simplified values." 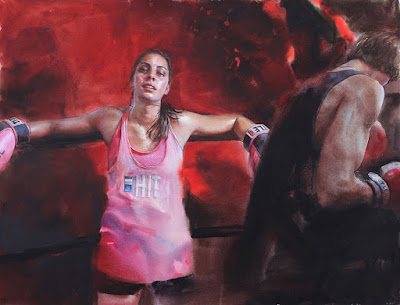 She says (Manatee Art Center), "Most people think of watercolor as being not as intense as oil paintings, but we can get the colors. So, I like to use intense colors when possible. The painting of the boxer, there's a fiery red background behind her. In real life it was just a white wall. But, because of the feeling I wanted to get, the feeling of heat, intensity, of a boxing trainer sparring with her partner, I changed the background to red." 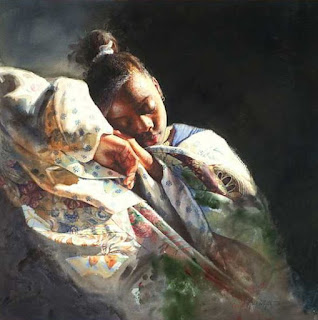 'Dream of the Ancestors'


She then outlines her process (Sullivan, Artist's Network):

"Generally, I prefer to do a study on location from life, then take several photos for reference, and lastly, plan and complete the painting in the studio. The photographs offer me more information about the model’s appearance, as well as suggestions for background and compositional elements. I rely on my memory and imagination as to what might be, then edit most everything else out.

"In watercolor there is very little room for mistakes, so having a well planned drawing beforehand is important. In large background areas I draw very little, but in complicated and detailed areas such as faces I carefully draw in the descriptive value shapes before I start painting. Having an adequate drawing on the paper in advance is like having a road map, and gives me the confidence to be able to paint quickly and at one go. 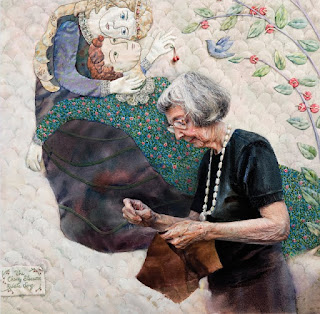 
"I know that many artists layer watercolor in successive glazes. I prefer to paint the area in “one go” to keep the freshness of color. Even my darkest backgrounds are done generally with just one pass, allowing the area to appear to have more atmosphere and depth. Details are painted slowly. 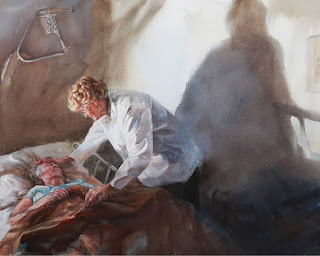 
Mary says, "I have tried many kinds of paper, but keep coming back to Arches cold press for its texture and resilience to scrubbing. I suggest that artists keep trying different papers, to find what is best suited to their style, as well as to be occasionally challenged by a surface that is new and different.

"I generally prefer heavier paper such as 300 pound which doesn’t need to be stretched, since taking a staple gun when traveling adds additional weight. However, in the studio I do staple and tape my paper down onto gator board. Having the large paper well anchored gives me a stable, flat surface suitable for painting large washes." 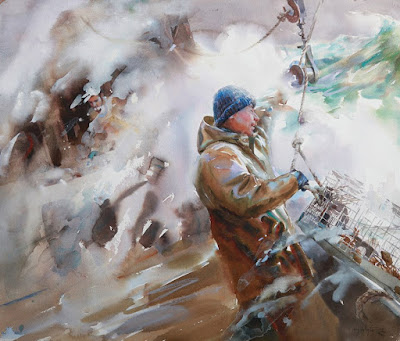 
In this interview, with Courtney Jordan (also the Artists's Network), she adds:

"Most of my students are surprised that I work upright, almost completely vertical, rather than working flat. Working vertical allows me to work large–when working flat, you can only work as large as your arm can reach–and gives me more control over my washes. It also allows me to step back and look at my work from a distance."

One shocking fact emerges in her interview with Freeman (p. 2) - she actually tears up about 25% of what she paints! 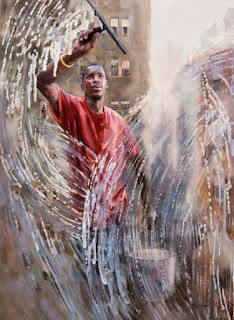 "Watercolor is full of unexpected surprises, which is the intrinsic beauty of it. However, sometimes the watercolor will backwash, run, get streaky or chalky in unplanned ways and ruin the work. When that happens, don’t say to yourself that you are a bad painter. Instead, say, “Isn’t that interesting?”  Make note of how that unplanned effect happened, because somewhere down the road you will want the watercolor to behave exactly that way again." 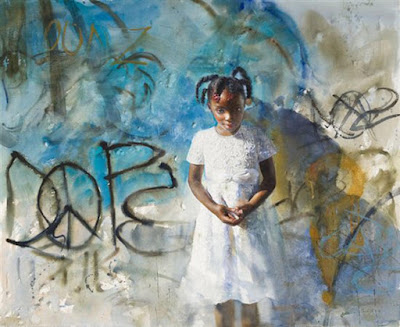 Mary Whyte said of this work, "Around Charleston, where I live now, I had noticed that there was some graffiti cropping up here and there, and I actually think graffiti can be quite beautiful, as long as it's not your building that it's on. But, this artful way that it's done I wanted to have this menacing background behind this sweet little girl, Lily here." 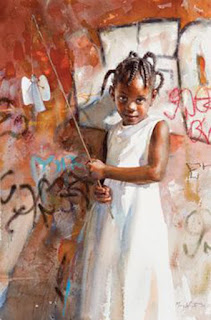 In this interview with Art Fields, SC, Mary says, "As artists, one of the greatest blessings is our entree into so many different kinds of people. In the morning you could be painting a hog farmer, and that night having drinks with a CEO of a large corporation. And there are not that many vocations in life where we have access to that many different kinds of people." 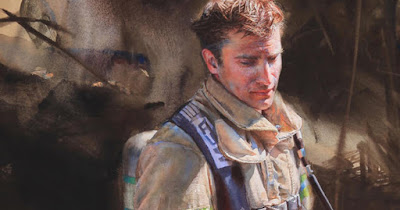 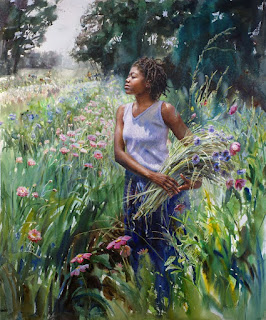 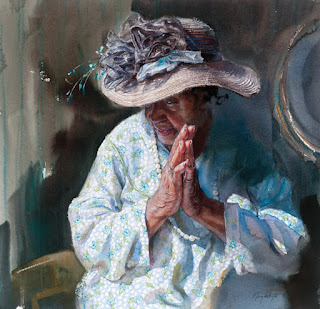 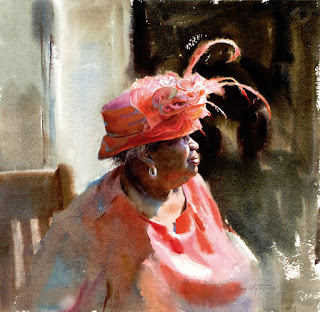 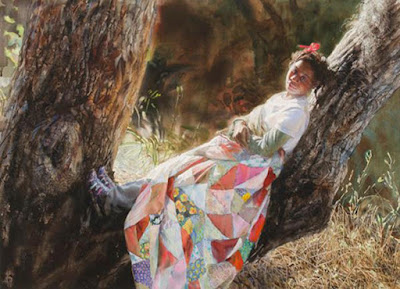 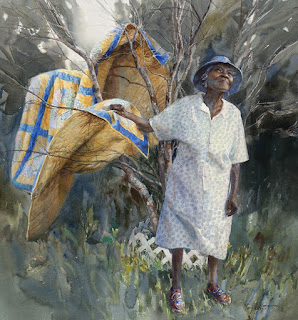