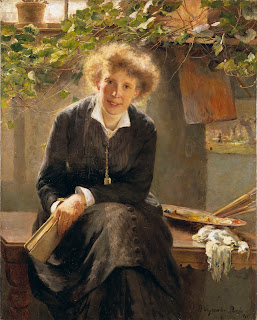 Today's artist, Jeanna Bauck is the first on this list to come from an earlier era. Born in Stockholm, Sweden in 1840, she died in Munich in 1926, the same year as Claude Monet. Jeanna Bauck studied both landscape painting and portraiture, travelling around Europe with her close friend and fellow artist, Bertha Wegmann. Jeanna's paintings were exhibited in the Paris Salons of 1881-2, as well as the Swedish Academy of Art and the World's Fair in Chicago, in 1893. She founded an art school in Munich in 1887, and also taught painting at the Association of Berlin Arts where the expressionist Paula Moderson Becker described Jeanna as her favorite teacher. 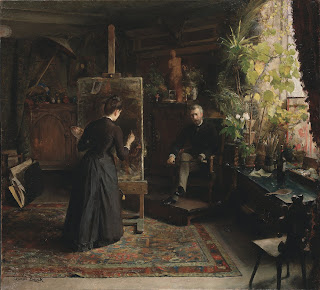 There's a fair amount of mystery regarding the life and work of Jeanna Bauck, and not so much of it is available online. I chose her primarily for the two artworks shown here, above and below: 'Bertha Wegmann Painting a Portrait', and 'The Artist's Sister'. But, I was hesitant about this choice, as I wasn't sure of the authenticity... 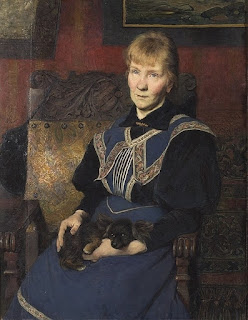 You see, This portrait bears a striking resemblance to this other painting by Bertha Wegmann, titled 'Portrait of Jeanna Bauck'. How could Jeanna be sitting as a model and painting herself at the same time? One of the two artworks must be mislabeled. 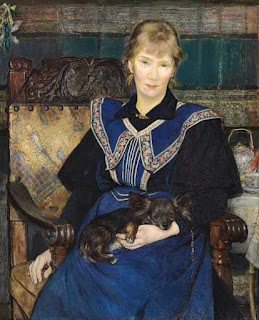 As it turns out, Bertha's is the one mislabeled; that is not a portrait of Jeanna Bauck, but her sister, the pianist Hanna Lucia Bauck. And, how do I know? It's not Bertha's only portrait of the pianist. I found these two as well, both by Bertha Wegmann, both ascribed to Hanna Lucia: 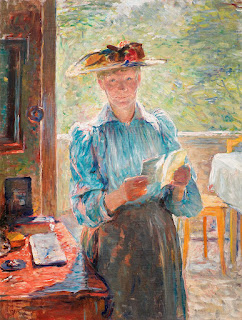 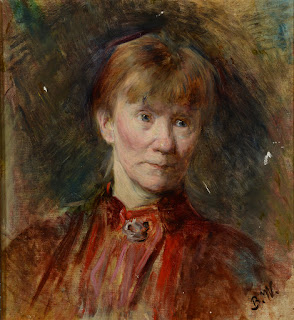 Note the resemblance? What really happened is that Jeanna's sister Hanna came to visit at their studio, most likely in Paris, and both artists painted her portrait at the same time. And, Jeanna's came out better, there's a haunting beauty to Hanna's expression, as if words unspoken passed between the two sisters while the painting was made. 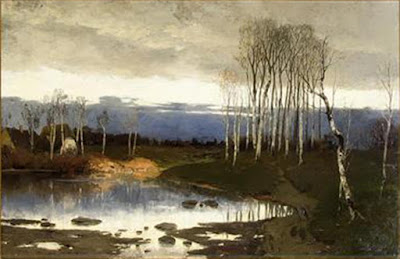 Jeanna Bauck grew up in Stockholm Sweden. According to SKBL her father was a composer, music teacher, and critic. He enjoyed painting as a hobby and encouraged Jeanna to draw and paint as well. At twenty-three, he sent her to Germany to study painting, first in Dresden, then Düsseldorf, and Munich. Her teachers included Adolf Erhardt, Albert Flamm, Josef von Brandt, and Dietrich Langko. Jeanna began as a landscape painter, and is considered a part of the Barbizon School movement (although I'm not sure if she ever painted there). 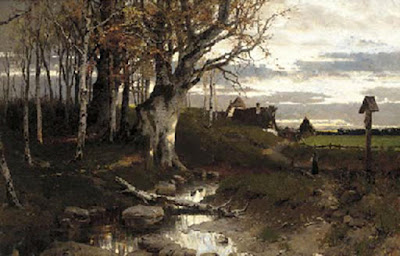 But the big mystery of Jeanna's life, which I'm hoping to answer on this blog, was the nature of her relationship with the Danish portrait painter Bertha Wegmann. We know they met in Munich. They lived together, shared studios together. They went on holidays to Italy together, moved to Paris together. They painted each other's portraits - Wegmann seems the major inspiration for Jeanna to move from landscapes onto portraiture. Neither woman ever married or had children. They are described as 'emancipated' women. The only other fact I know is that they both died in the same year, 1926, three months apart. It seems the two may have shared a relationship? But most of the literature written for them at the time wanted to cover it up? I've reached out to the Swedish National Museum's research division, and I'm curious to see what they have to say. Not that it makes any difference to her artistic achievements. It's just, when you commemorate someone's life, you want to commemorate their true life, and respect who they were. 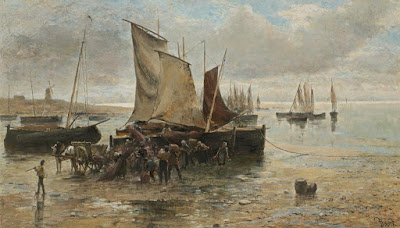 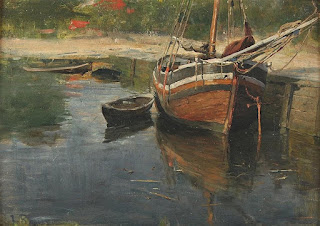 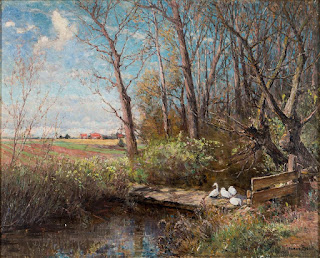 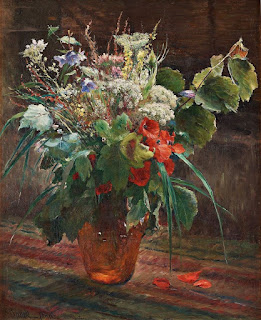 'Owl with an Umbrella'