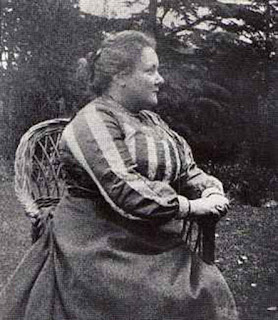 Kate Elizabeth Bunce is a remarkable 19th century painter from Birmingham, England, whose work falls somewhere between the Pre-Raphaelites and the Arts & Crafts movement. Kate grew up in a wealthy family, so she never had to worry about earning money or marrying. She was the second of five daughters. Her father owned and edited a newspaper, the Birmingham Daily Post, and was, at one time, chairman for the Birmingham Museums and Gallery. 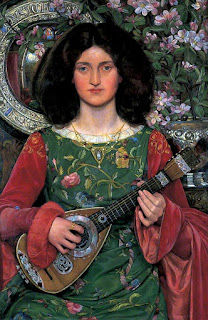 Kate was raised and educated at home. Around the age of 25, she attended the Birmingham School of Art, where she won a bronze medal for her work, which she painted in tempera. In 1887 she exhibited at the Royal Academy, and began showing her work throughout England, up until around 1912. In 1888 she became an associate in the Royal Birmingham Society of Artists. In 1893 she was invited by the city of Birmingham to paint part of a historical mural series for the Town Hall (the murals are now lost). By around 1910, Kate Bunce's work was considered old fashioned as new movements like Fauvism and Cubism hit Europe. Kate stopped showing work in galleries and instead, turned to decorating churches with her sister Myra. Myra was a skilled metal worker, often making copper frames for Kate's work. Neither sister ever married, although I'm not sure about the other three. I read there is a diary of Kate's, but I haven't seen it or much else about her life online.

The curatorial staff at the Birmingham Museums & Art Gallery have 'Musica' (shown above) in their collection. According to them, the sitter might be Kate's sister, Myra. She sits in a chapel - if you look in the mirror to her left, you can see a stained glass window with the Virgin Mary. 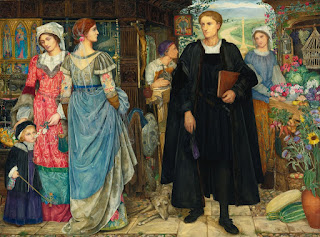 I haven't yet found information about this painting, but I'm working on it. 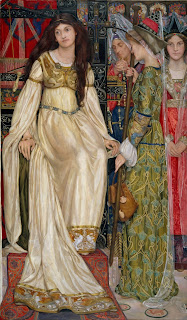 This painting is based off of a poem by the painter Dante Gabriel Rossetti:

'Then stepped a damsel to her side,
And spoke and needs must weep:
'For his sake, lady, if he died,
He prayed of thee to keep
This staff and scrip'.

According to the Birmingham Museums & Art Gallery, the woman in white is Kate's cousin, Margeret Wright, the girl in green is her friend Katie Palmer, and the girl in red on the far right is another friend, Ethel Newill. 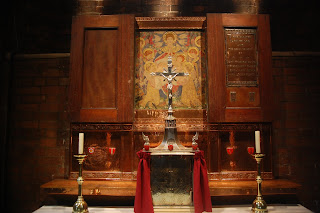 This is a 'reredo' altar piece created by Myra and Kate Bunce for the St. Alban the Martyr Church in Birmingham. Myra made the copper frame and Kate painted the interior. This was their response to modern art. 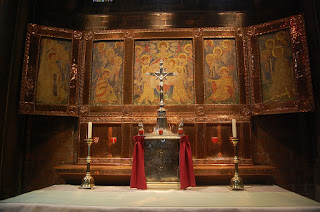 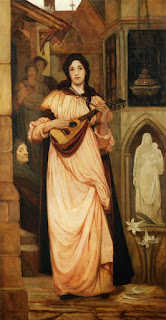 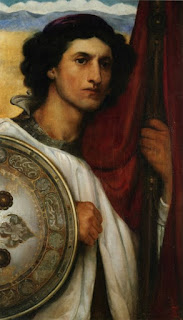